I have a red series switch (LZW31-SN) that I was going to install in a hallway light that I originally thought was a 2-way until I opened it up. There is currently only one switch controlling this light and I now believe that before a previous re-model it was a 3-way setup and it seems that maybe one of the switches was hard wired and covered up in a switch box.

When I open the cover of the existing switch it appears to be a 3-way switch with a red, black and white wire (plus the ground). (see photo). No neutral in the box, which is consistent with the rest of the house which was built in the early '70s.

I measured each line, compared to the ground wire, and the red one is always 120v. The black and white ones alternate 120v depending on the position of the switch. So it seems the black and white wires are traveler wires.

In looking at the Inovelli diagrams, I’m not sure of the correct wiring. It seems to make sense that the red (hot) wire would go to the “line”. Would the two traveler wires go to “load” and “traveler”? What I’m not sure is if this switch would be in the first position, or the add-on position (not sure if that terminology is correct)?

Any help in determining how to wire this would be appreciated. Let me know if there’s more information I can provide. 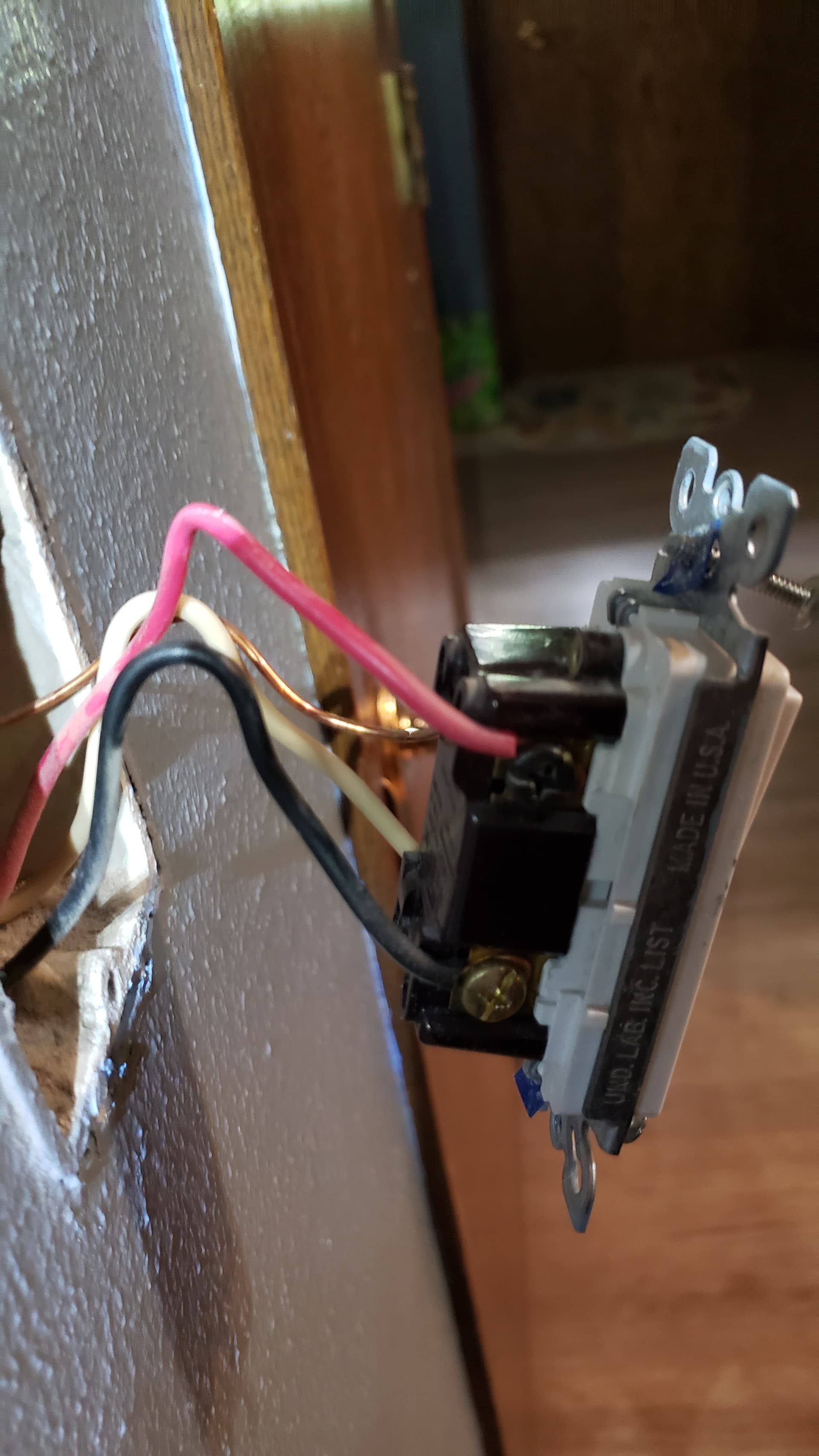 First, let me ask. Did you find the other side of the circuit that houses the other switch? This is important.

With a non-neutral, you have to use an Aux switch on the other side of the circuit; or alternatively, you wire it as a load only switch and cap the lead not used.

In looking at the Inovelli diagrams, I’m not sure of the correct wiring. It seems to make sense that the red (hot) wire would go to the “line”. Would the two traveler wires go to “load” and “traveler”? What I’m not sure is if this switch would be in the first position, or the add-on position (not sure if that terminology is correct)?

Red would be line. The other two wires don’t matter in a true 3-way switch. You can place them on either Traveler or Load.

You can place them on either Traveler or Load.

I think this is effectively a 2-way now. No other switch.

So two possibilities, neither of which matter. Whether it’s a line to the other box or line to the light is irrelevant based on what you have now. As @harjms stated, use the red for the line. For the load, figure out which one of the black or white will turn the light on when shorted, and use that for the load.

There is no traveler. Cap the unused one off.

Honestly I would be working on finding that ‘missing’ switch. In the US, there’s a reason it’s against code to drywall over a junction box and remove access to it.

In every one of my non-standard wiring situations for my current house, I’ve always inspected each part of the circuit to better understand what I was working with and my options. I’ve had a power at the light 3 ways with 2 fixtures that I split into two separate switch-fixture pairs (makes way more sense now for the layout), I’ve had a 3-way with power at the light where I lucked out that one of the switches was in a double gang with a different breaker circuit switch (wth?) so I was able to use the traveler to get neutral to the non-neutral switch.

I’m confident that the connection is in a junction box somewhere rather than just being drywalled over. Work was done by my dad, who at the time was a licensed electrician and it was his house. I trust he would have done things according to code. This change would have been done about 40 years ago and I bought the house from him about 30 years ago. He’s 89 now and doesn’t remember anything about that change. I suspect the splice is in another 3-gang switch box where some fan controls have been added over the years. I could dig that out of the box but it’s packed in there and would rather not if I don’t have to. I can probably get him to come over and help me sort it out if I need to.

If I really need to I can crawl up in the attic and see if I can follow what’s going on. Everything would be within about five feet of the crawl space access. I was just hoping there’d be an easy answer in just hooking it up without any concerns.

Thanks for the input. I appreciate having someone ponder what I’m doing and throwing up a red flag if there’s an obvious issue I’m not seeing.

To code would have been capping the extra wire and installing a single pole switch instead of leaving the 3-way switch installed and applying power to a wire that isn’t being used otherwise.

If the rest of the wiring was corrected properly then one of the 2 traveler wires is capped in the other box. So, try removing one at a time and see if the switch still turns the light on and off. Then, only use the 2 wires that work.

I would wire it as a single switch. Touch WHT to RED and see if light lights up. If not, try BLK to RED. Wire that to Load. Cap the remaining wire.

Not to say your dad didn’t wire per code or standard, but I have a lot of trades family members and you’d be surprised how “just a sketch” out of code compliance they are when it comes to their own house.

If you are going to hunt down the other end, I’d check the existing box at the other end of the room, or top or bottom of stairs, etc. At least in the US, the NEC requires a switch at room/stair entry points, with exceptions. Or look for a box with a solid cover. If you find those junctions in an existing box presently provisioned with other switches, I’d check the box capacity to ensure it’s not overloaded. But that’s just me.

Also, if you do find the other end, you may be able to send a neutral over an unused conductor, as @RequiemKat indicated earlier. However, there are two distinct wiring possibilities when you only have one end of a 3-way terminated with all 3 conductors from a 3-wire. You should be able to do it with one of those possibilities and probably not the other.

The next problem I ran into was that I had a CFL bulb in there and it was turning on and off slowly. Then I remembered that with the no-neutral setup there’s a wattage requirement. I temporarily replaced the bulb with an incandescent one and everything responded as expected. I was then able to pair it with my Hubitat system and will now start learning how to set everything. I’ll have to get the appropriate capacitor to put in the light fixture so I can get an LED bulb put in there.

Thanks for the friendly help and the input from everyone. I’ll probably track down the other end of that line when I get a chance, if for no other reason than to mark it, while I remember, as to what it’s doing and why it’s in the state it’s in. I have no concerns that it’s in a safe state (code or not) so I’m not too worried about it. I know my dad well enough that he’s safety concious enough that he would never have left it not in a box, and well capped off.

Glad you got it sorted and remembered the load requirements. The Aeotec bypass works and I believe the cheaper Jasco bypass works as well. If you can find the other end of the circuit, it might be worth sending neutral down