I tried my best googling around for this behavior to see if there is a common wire configuration that might cause this. I have not found something similar just yet and was hoping to get some advice here.

This is in my new home. I am brand new to working with electrical in any capacity. I installed one LZW31 dimmer switch in the same room without issue for a different set of lights. The wires in that particular gangbox were fairly straight forward. There was one green (ground), two black (one line and one load), and then a group of white wires capped together (neutral). So with that set and the fact that no other switches control these lights, I believe this was a single-pole installation.

In this second gangbox, it’s a bit more complicated since there are more wires. To my novice mind, that made me think that maybe this is a 3 or 4-way box, but these lights don’t have any other switch that controls them. There are two green wires with differing wire gauges. The thicker one was not able to fit in the ground slot on the dimmer switch, so I used the thinner one (spidey sense starts tingling).

This box also has three black wires. The original dumb switch had a black wire connected to it that was capped together with two of the black wires in the box. I assumed this is the load and the remaining third black wire is the line (spidey sense continues), which is capped with the second black wire from the dumb switch.

This box also has a similar of white wires capped together.

I’ve attempted two wiring setups and both have ended with the same result of initially working, but then not working later on (LED on switch stays on, but the switch won’t turn on the lights):

I’m at work at the moment, but can get pictures if they would be useful. I’m hoping my description of the issue make the problem obvious to someone.

I appreciate any and all advice.

So if there is only one switch controlling the light(s), then that is a 2-way installation and the switch used is a single pole switch.

The original dumb switch will have had (in your case) two black conductors and a green ground wire. If you have pictures of what you started with, which is always a good idea in case you have to revert to the original and is a good reference for when you need help, take a look at them.

I don’t understand why you have two different gauge green ground wires, but I would use the same ground that was attached to the old switch. I suppose it’s possible that this switch is on a 20A circuit. What does the breaker say?

By default, the switch should work without changing parameters as a 2-way neutral. If you tinkered with parameters, or even if you didn’t, I would factory reset the switch. (20 secs or so on the config button)

If all this seems OK, then it could be your bulbs. If you can, temporarily swap out for incandescent and see if that makes a difference.

Thanks for the quick reply.

I will definitely try switching from the current black wire that is connected to the line terminal.

Since posting, I realized I did actually already take a picture of the dumb switch. Here is that: 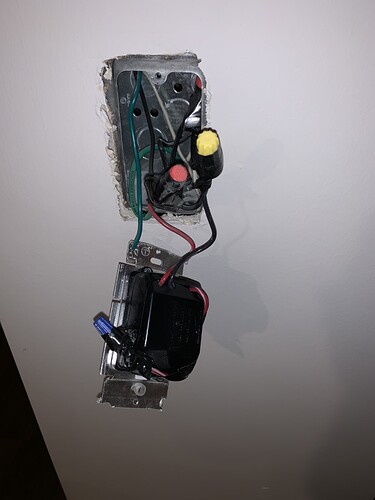 Does that help clarify things?

So the thin green wire attached to the frame of the old switch is your ground. To be sure, I would turn off at the breaker and using a meter, test for continuity between that and the metal box.

It’s tough to see all the connections in the box, so test to insure you know what you have.

I guess the only difference from how I have the smart dimmer connected to the original dumb switch is that I don’t have a black wire available to pigtail with the green and 2 black wires, so I just have those two black wires slotted into the two load slots on the dimmer and the green one capped and connected to nothing.

Stupid question, but can I just buy black electrical wire, wire cutter/stripper, and just replicate the dumb switch? There’s an ace hardware a couple minutes away. I guess I’m not sure of the wire specs (e.g. gauge).

so I just have those two black wires slotted into the two load slots on the dimmer and the green one capped and connected to nothing.

I don’t think you are following me at all. If you are that unfamiliar with electrical work, you might want to consult with an electrician.

The constant hot is the LINE and goes to the LINE terminal.

I don’t know which green you’re referring to, but if the green goes to the light(s) it goes to the LOAD terminal.

I know which black wire is hot (the line) and have it connected to the dimmer switch correctly.

I was referring to the thicker gauge green wire. The thinner one is already used as the ground and attached to the dimmer switch.

It seems I need to pick up some black electric wire and try just replicating the original dumb switch setup. If that doesn’t work, then I’ll need to contact an electrician as you said. I have some other minor electrical work they can help with anyway.