I am having trouble trying to install my LZW31-SN Red Series Dimmer, and want to make sure I install it correctly. Here is what I know:

I want to make sure that wire the LZW31-SN correctly but I am not how to proceed here and I am worried about potentially damaging the switch if I do it wrong.

Picture that the bullet points reference: 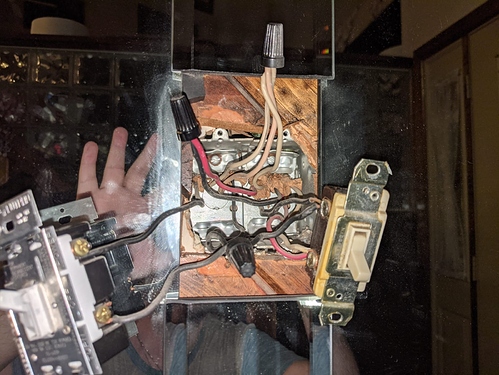 Any help would be greatly appreciated, I already have one of these switches installed and am loving it so far.

Not sure what is going on with the 3 way since it seems that the switch for that (right switch) only has 2 terminals and I would expect 3. 3 ways generally use a double pole switch with a center and 2 outs. However, I think despite this, the dimmer situation sounds pretty normal. It looks like R1 is the run to the light with a neutral (white) and the dimmed load (black). R2 seems like it is the power line into the switch with white as neutral and black as line. It looks like perhaps the 3 way is a reverse setup where line and load are at the same end of the 3 way (usually line is at one box and load at the other) and so they are running line up to the other end of the 3 way and then back.
To be sure, best would be to disconnect the dimmer and check the voltage across R2 white/black which should be 120 with everything disconnected. Assuming that just wire the dimmer with R2 black into Line of the new dimmer, R2 white to neutral of the new dimmer, and R1 black to load of the new dimmer.

Should be fairly straight forward, the switch on the left is the one you want to replace? if so looks as the bottom black is you hot and top black is load . you need to pig-tail the nuetral (white) to the white bundle and the same for the ground bundle.

In general, white wires are neutral, black wires are hot or load, green wires or bare copper wires are ground. So for a normal on/off switch, that’s fed through the switch box, you’d expect to see two romex entering the box, each with black/white/ground. The whites would be tied together (neutrals always tie together), the two blacks would go into the switch (so the switch interrupts the power flowing from the circuit breaker’s hot line to the light’s load line).

On a 3way things are different- a 3way is the only time you’ll find a white doing something other than neutral.

Most likely:
Romex 2 is probably the supply from the circuit breaker. Its black is hot, so it’s both feeding the left dimmer switch and also feeding power down Romex 3 for a 3-way.

Romex 1 is probably going to a light, specifically the light that the left dimmer switch feeds.

If you want your Inovelli to control the porch light, you use Romex 1 and 2- Romex 2’s black goes to Hot, Romex 1’s black goes to Load, and the switch’s Neutral goes to the white neutral wire nut with the other whites.

Chris: thanks so much for the detailed answer. Your breakdown makes me feel much more confident in installing this.

Kevink and Sky320: Thank you for responding as well.

All: I will check back tomorrow after install.

Thanks for all the help!

New Dimmer has been installed and powering things as expected, thanks for all the help guys.