Starting a thread to track bugs and/or enhancement suggestions for future firmware releases.

As of right now we do have up to 54 slots available for Pixel Effects/Animations, so any ideas are welcome!

I’ve captured some below based on initial feedback:

I second the stuttering dimming effect, it doesn’t bother me enough to change it to instant on, but if it can be smoothed out in a future update that’d just make this product even cooler

I’ll begin this comment by saying I’m sure this idea goes beyond the scope of what was hoped to be accomplished by this product. However, if it can somehow be accomplished with use of extra hardware, I’ve always wanted to implement ambient lighting for use on a TV. Similar to Philips Ambilight, where it does a soft extend of what’s currently on the screen, but not Philips because I’m trying to avoid their overpriced products going forward.

Second part, though this might be my misunderstanding, but while playing around with the pixel effects I noticed most of them are only in green. I run my automations off of Home Assistant, so following the calculations on the user guide its brightness * 256 + effect choice. Maybe the way to resolve that is to tweek the calculations to get different colors. Is there a way to have some of them be a tunable white instead of green? Examples are effects 1 - 5, they’re all green when I try them on my end.

Lastly, and probably my only suggestion that will end up being possible if there’s enough interest, but would it be possible to have an effect which is basically a combination of effects 4 and 5? Color wipe and reverse color wipe? So it will start lighting the LEDs closest to the controller and the farthest corners at the same time, with them meeting in the middle of the strip. And then the opposite of that, where they break in the middle and chase towards each end of the strip. I think that one might be fun for use on a TV for turning on / turning off.

Thanks @Eric_Inovelli! Here’s some initial feedback from me. To put this in context, I’ve got lots of experience with LED strips and pixels (we have a full-on pixel tree in our front yard running animations at Christmas!) but am a complete Z-Wave newbie.

My use case for these, as I’m guessing for some others as well, is under/over cabinet lighting. For this case, many (most?) of the preprogrammed animations aren’t so useful - you don’t even see the individual colors, anything twinkly just looks like the strips are flashing on and off, etc. Just to take an example, the Christmas red/green animation that looks beautiful on the strip itself just results in a muddy brown color (red + green) when I put the strip under the cabinet. What I would love to see is to be able to control the strip by sections - so the part of the strip under the first cabinet would be green, then under the second cabinet red, etc.

I mentioned this in the original thread, but if the strips could read the fseq files generated by XLights, this would open them up to any effect that the end user could create. And for a single strip like this, XLights is dead easy to use. I’d be happy to jump on a zoom call at some point to give a little demo if that would be useful.

But overall, very happy with them.

Even as a z-wave noob, I had no problem getting them up and running with Home Assistant - the provided instructions worked perfectly for me.

…(even when using the custom strip effect parameters).

Are you using OpenZwave? If so, which version 1.4 or 1.6?
I have successfully paired the strips with HA but cant seem to set config parameters. I’m using OpenZwave 1.6

If I understand HA and zwave correctly, I believe I’m not using OpenZWave, but the standard zwave integration. I followed these instructions: https://support.inovelli.com/portal/en/kb/articles/installation-setup-lzw45-red-series-smart-led-strip-home-assistant-hass-io

Note that there’s a minor error, which is that the zwave integration no longer appears on the configuration page, but has been moved to the integrations page, at least in newer versions of HA. But outside of that, they were completely on point.

Edited to add: we might want to move any further discussion to a different thread to keep this one about improvements/bugs. Moderators please move this post if needed.

Should the strip just turn off after a quick effect happens? If so, could we have an option per effect to treat it like notifications on other devices like dimmer switches?

Scenario:
Solid warm lights are being used, but [some event] happens, so I trigger a quick effect to alert me to that. The quick effect is set to last 15s. After 15s, the strip reverts back to warm lights

Or maybe I am just not using the features correctly

But currently, when I was testing that, after a quick effect finishes the strip turns off

My wife has an OCD psycho-dog: 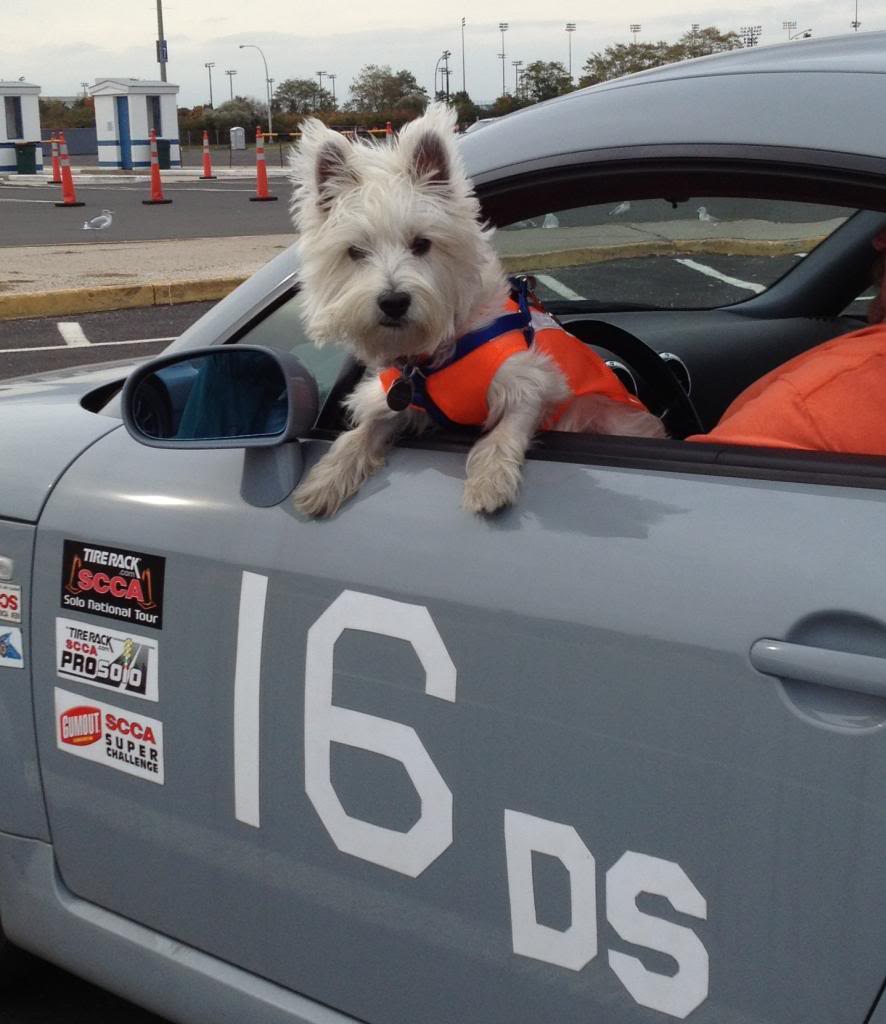 He chases anything that moves, be it a critter, leaf blowing across the lawn, sun reflecting off my watch face onto a wall, and most importantly a laser pointer red dot. If I shine the laser pointer under the front of our couch, he will stand there barking at the couch for 5-10 minutes after I turn it off thinking that he has a critter cornered.

I have a pan/tilt/zoom security camera in the living room that I can control when away from home, with a laser pointer attached to it. Before COVID turned us into house hostages, I would play “red dot” from work at lunch time by moving the camera around with the laser pointer remotely switched on.

Anyway, my animation request is for a mode that makes a red “dot” move randomly around at different speeds, with pauses and direction reverses. With a strip under the couch, up a wall, or along the edge of the ceiling, I suspect that it would provide him with entertainment.

Another animation suggestion is for one that I didn’t see. Is there a red/white/blue animation for the Fourth of July? I saw the red/green one for Christmas, but don’t recall seeing one for the USA colors…

As of right now we do have up to 54 slots available for Pixel Effects/Animations, so any ideas are welcome!

A fireplace effect is always a classic addition to pixel controllers.

I was missing it as I tested mine out this morning.

Not sure what it would actually look like, but how about a simulated TV effect? Something that could be used to make it look like someone is watching TV when no one is home.

Here is a “bug”/design issue I have.

I was hoping to mount these into a window … guess not. 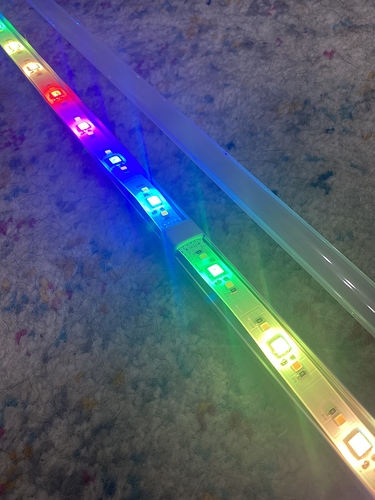 You just need to get a bigger channel. I don’t have my caliper handy, but the connectors are about 5/8", 16mm. So look for the wider channels. Hue strips have a larger width as well, so there are channels available.

I haven’t tried these, but they’re worth looking at. These are Amazon links, but you find more on Alibaba.

You are correct. I just checked the connector on one of my strips and it was 15.95mm wide, so a true 16mm channel should work fine. The connectors are 6.67mm high if that matters.

As @wizardlizard said; many of the pixel effects you cant really appreciate when the strip is mounted under a cabinet. Christmas for instance, cant tell its red/green. I think they need to be tweaked to do like 4 LED’s in a row green, then 4 red, etc.

You just need to get a bigger channel. I don’t have my caliper handy, but the connectors are about 5/8", 16mm. So look for the wider channels. Hue strips have a larger width as well, so there are channels available.

Sure—that was my next thought, but the channels I’d be putting them in don’t have that kind of space available. Looks like I’ll end up just cutting out the joints and soldering them together, but I do wish the connectors were smaller.

Finally had a chance to setup one of my strips. Love the color and light output, packaging is classy too.

I ran through the effects. I would love to see a couple color fade options, where the entire strip fades through colors at random (or most likely a preset sequence). Maybe a dark color fade, a light color fade, and an all color fade? The ability to set a fade speed would be awesome as well. Also the Christmas and halloween effects are not as clear when viewing the ambient light. Maybe grouping the colors by 4 pixel groups and alternating between the colors could become a 2nd version of these effects.

Any chance you could add a lightning effect? Something like a random section of maybe 4-8 LEDs lighting up with a cool white and flashing briefly. It would happen again after a random interval between 5 and 15 seconds. I would like to be able to automate a simulated thunderstorm in my daughter’s bedroom. The light strips I currently have in there (Kasa) have a lightning effect but can’t talk to HA.