Load in between switches 1 and 2, in a 3 switch setup

I have a light controlled by 3 switches. The first switch is a 3-way that gets the line and connects to the light & the 2nd switch, which is a four-way that connects to the light & 1st switch (as mentioned), and the 3rd switch, which is a 3-way. I’ve attached a diagram of the circuit. The only info not shot on the attachment is that the 1st switch is in a 4-gang box, where the line is split by pigtailling the black and white wires, respectively, and connecting to other switches in the gang box (unrelated to the light in question). This is represented in the attachment by wires coming out of the pigtails and not connecting to anything in the top left corner of the image. The red wire coming from the Line (again, in the top left corner of the image) is connecting directing to one of the other switches in the gang box, again unrelated to our light in question.

My goal is to replace switch 3 with a Blue Series switch. I have a White Series Aux switch that I can use on the other switches if need be, but would prefer to use dumb switches if possible.

How would I go about getting the Blue Series at switch 3? 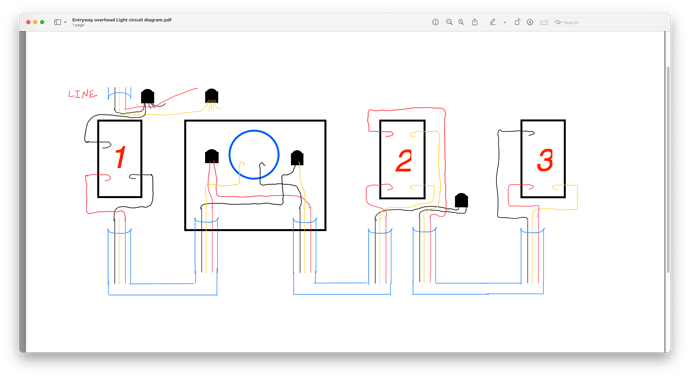 I don’t believe you’ll be able to put the Inovelli in Box 2 with dumb or Aux switches easily. Aux switches use less conductors, but you’re still short one between Box 2 and the light for a neutral installation.

Normally, you would use two conductors to pass the hot and neutral from Box 1 to Box 2, via the light. The third conductor from Box 2 to the light would be used to pass the switched hot back to the light. But you’d also need another conductor, which you don’t have, for the traveler between Box 2 and Box 1.

1 - Use all Inovelli switches, and control Box 1 and Box 3 via binding, or scenes.

2 - Does Box 2 have anything else in it? If there is a hot there you could move the light to that branch circuit.

3 - You MIGHT be able to put the Inovelli in Box 2 as a non-neutral, so you wouldn’t have to send the neutral to that box. This would free up a conductor to use for the traveler. I hesitate to recommend non-neutral installations, which may require a bypass at the light, possibly re-wiring at the light, and other issues.

Thanks for the reply. When I went to double check what else was in the box, I realized I had the wrong switch - I actually would prefer to replace switch 3 not switch 2!

Sorry for the mixup, but hopefully this one is more feasible than the first ask

hopefully this one is more feasible than the first ask

Please take a moment to re-read my explanation so you understand it. 2 or 3 doesn’t matter, because the issue is between 2, the light and 1.

Ah, that makes sense that 2 or 3 wouldn’t matter. I don’t fully understand your explanation, but due to my own lack of knowledge on the subject, not because of your explanation.

I don’t have any issues with re-wiring at the light, as long as we’re able to work with the cabling already there - running any new cables isn’t an option at this time.

I can put the Blue series in Box 1 if absolutely necessary, but I already have 2 red series in that 4-gang box, and it is cramped in there! So I’d like to avoid that if at all possible.

I’ll be glad to tell you how to put the Blue in Box 1 with a neutral configuration and Aux switches. While a non-neutral might be possible for 2 or 3, I stay aware from recommending them, to avoid issues.

That’d be great, thanks!

Blue must be set to 3-way momentary.

That’s awesome, thanks for the help. Waiting on a new light fixture to come before I’m able to try out the wiring, but I appreciate your time.