What I am trying to do:

Replace the on/off wall switch for my fan light with a smart switch (or scene controller).

What happens when I wire up the switch and turn on the power:

The light switch seems to enter a reboot loop, where the lights flicker on briefly every few seconds, while the switch LED flashes red, green, blue. The reboot loop typically ends after a while with the lights and switch staying off.

After adding the Aeotec relay (hopefully correctly, there were a lot of wires in there

), behaviour is the same. 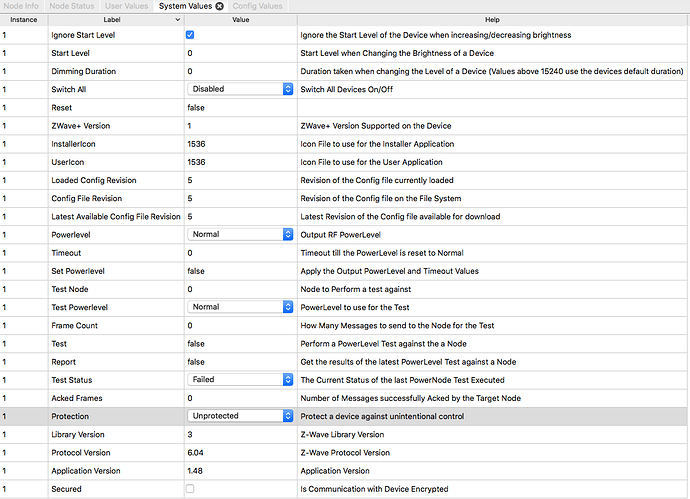 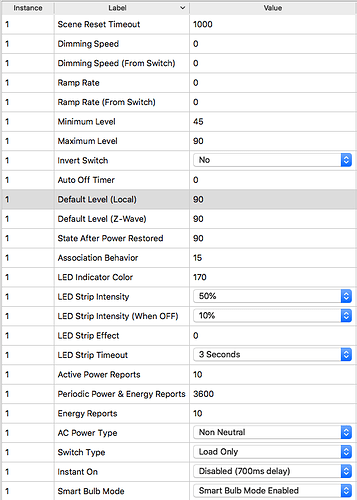 Note: I typically had maximum level and all default levels set to 99, I started experimenting with various lower values when I took this screenshot after reading another post. The intention was to set Protection to Protection by Sequence as well to disable the internal relay.

I tried two ways. I have a poor picture of one way, where I connected one end to the bundle of neutral wires leading to the bulbs and the other to the bundle of hot wires. The other approach I tried was adding the bypass between neutral and hot before they lead into a box which splits them into 3 wires each. 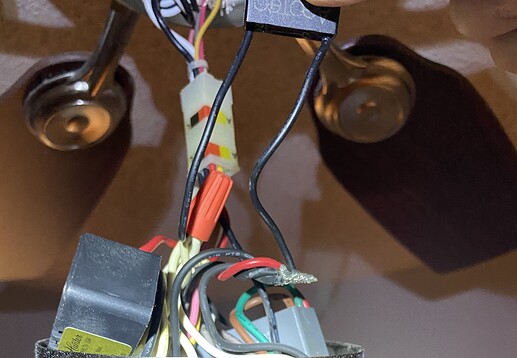 So, now I am trying to figure out what to do! Is there going to be a way to get this switch working with my particular setup?

So, now I am trying to figure out what to do! Is there going to be a way to get this switch working with my particular setup?

So it sounds like you have the switch wired as a non-neutral. You have a switch loop (only two conductors) in the switch box. Turning on your old switch would power up both the fan and the lights? Is that correct?

So it sounds like you have the switch wired as a non-neutral. You have a switch loop (only two conductors) in the switch box. Turning on your old switch would power up both the fan and the lights? Is that correct?

Yes to everything you’ve said!

So you can’t wire it that way but there may be a solution.

The dimmer is designed to dim bulbs, not motors. And you have both your bulb (OK) and your fan motor (not OK) on that switch. So a LZW31 isn’t appropriate here. You might want to consider using a LZW36.

Ah, gotcha. I was hoping for a way to treat the switch more as a scene controller, while always supplying full power to the fixture. (Not controlling the load or dimming)

I don’t think the LZW36 will work with my wiring as it states a neutral wire is required.

I don’t think the LZW36 will work with my wiring as it states a neutral wire is required.

You have both a hot and a neutral in your fan box. Neither the fan nor the lights would work without both.

That sounds great! I’ve ordered the LZW36 and in the meantime took down my fan to try to figure out the wiring in hopes that it goes smoothly once the switch arrives. There was already a Hunter receiver module in there but some of the wiring came apart when I was removing the fan and I lost track of how it was wired. I removed it as I will be replacing it with the Inovelli module anyway, and the remote is missing.

Before and after rewiring without the module, power to both the fan and light are cut when turning off the switch. I believe this represents my wiring situation:

This seems to be similar to this diagram:

This is what I am trying to figure out now. I am uncertain of how I need to modify the existing wiring to accomplish this.

If I understand correctly, my switch box has line (white, measured at 120v) and load (black, measured at 0v).

My fixture box has:

A bundle of 3 black, 1 white not connected to anything in the box. (hot/line?) 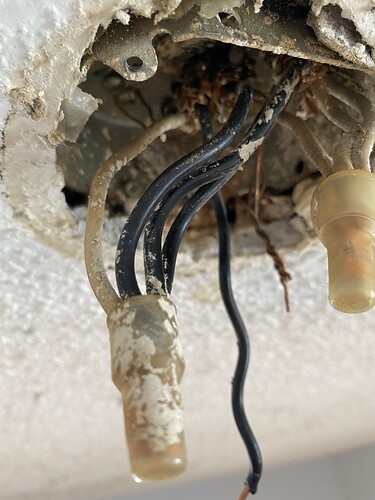 image3024×4032 2.15 MB
My understanding is the white is likely leading to line/white in my switch, with the black leading to the power supply.

A single black leading to the fixture (load?) 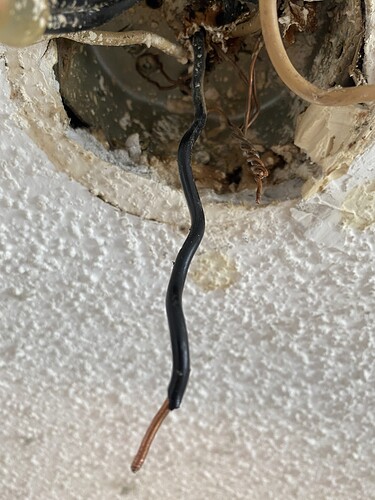 image3024×4032 2.26 MB
My understanding is the black would be leading to the load/black in my switch. When the switch is on, measured at 120v. It is currently wired to both the light (white/black) and fan (black) power in wires on my fan.

A bundle of white, with one leading to the fixture (neutral?) 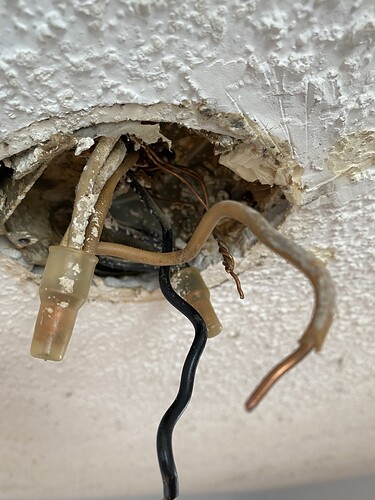 image3024×4032 2.3 MB
My understanding is this is my source of neutral which I need to send to the switch. This measures at 0v. It is currently wired to the neutral in (white) wire on my fan.

What I think I need to do:

Yep, I think you have it!

Thanks for all your help, can’t wait to hook it up! Will post an update when it’s done.

It was an eventual success! At first I must have caused a short or something somewhere as the power to the room would not come on when I turned on the breaker. Luckily I hadn’t fully reassembled everything yet when I tested it. I took things apart and determined the wiring in the fixture box was not causing the issue with the fan motor removed, so I incrementally put things back together, checking for power occasionally. Here’s the first shot of all the necessary pieces of the puzzle working, with the light precariously hanging from a bundle of wires:

(I haven’t programmed it yet, so the smart bulb has a delay in turning on, as the switch is still trying to fade it in)

Now to configure it!

Thanks again @Bry for your assistance.