Trouble is:
The LZW31 will not turn off/on the lights from paddle nor Smartthings.
Both of the old switches still work fine.
The LZW3 will dim both using paddle and in Smartthings.
It connects to Smartthings fine and changes light status to off/on but the lights are not affected.
I have set the neutral (yes) and AC type parameters (3 way toggle).

I did have some trouble setting the parameters from the switch but worked fine in Smartthings (could be my inexperience using the switch).

Took some doing but I managed to identify all wires (using continuity testing) so pretty sure I know where each wire goes/what it does. I did not have a neutral in any box so had to pull one in from another box. See attached diagrams.

Read some forum items so removed all LED bulbs and left only 2 100w incandescents.

Going to recheck that my wiring and my diagram matches but not sure where to go past that! 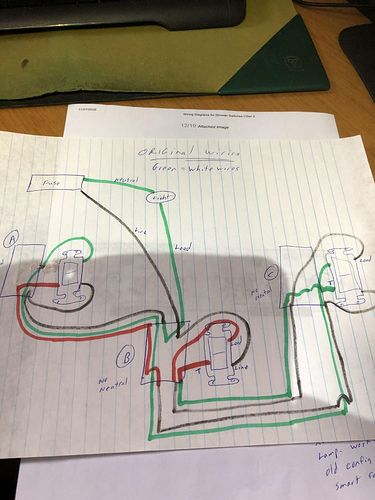 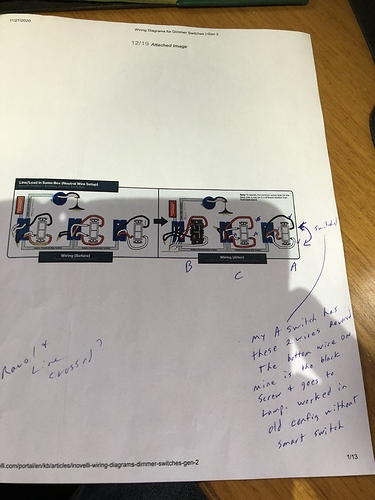 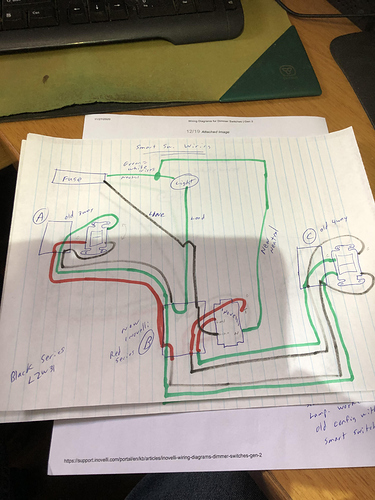 I can give you some general thoughts that might be of value.

I didn’t get past the original configuration drawing. It looks like you have a non-neutral 4-way with power routed to a 3-way <-> 4-way <-> 3-way.

It also might help you understand your drawing if you put the switches in order to get a better view of the logic. i.e 3-way, 4-way, 3-way. For the 3-way switches, you need to label the common terminal as that’s the important one.

I don’t know if simply pulling a neutral to a box to use with an Inovelli will work in a non-neutral situation or not. If I were approaching this, I put the Inovelli in the first box (B) as a non-neutral, then use Auxs in the other two. Like this, but just add another aux: 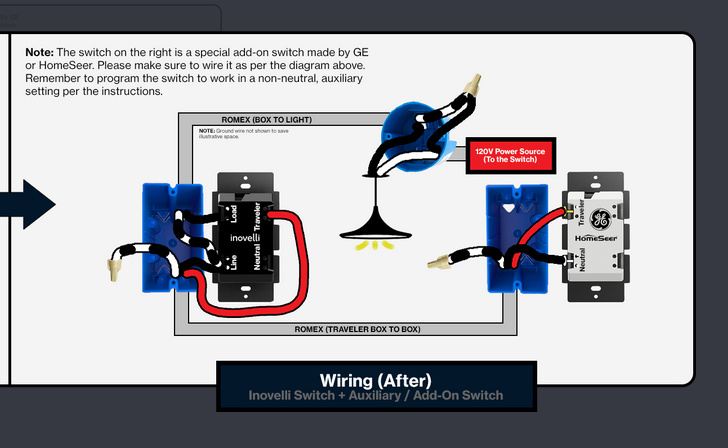 EDIT: It occurred to me after I posted that you pulled a neutral from the light to the first box. Did you do that with a 2-wire, hopefully? If that’s the case, then in the light box, connect the hot and the neutral to the Romex you ran. So now you have a line in the first box. You would use the old 2-wire to send the load back to the light. Now you can wire this like a normal 4-way with line and load in the same box: 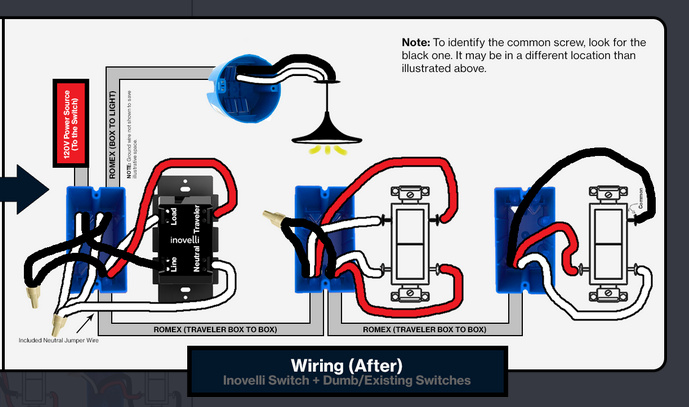 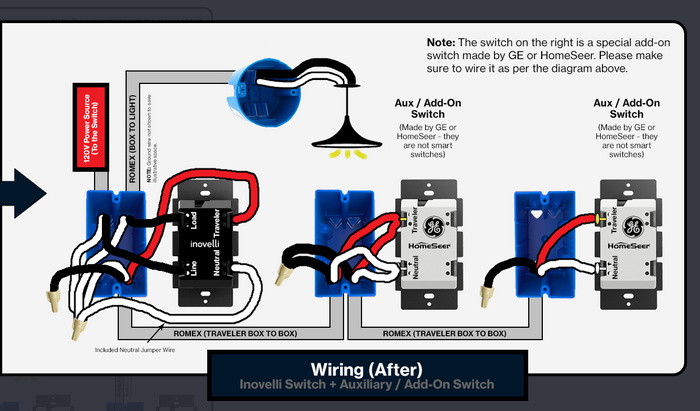 Thanks very much for your help. I pulled the neutral from a nearby receptacle not the lamp. It would be very tough going to route a new line to the lamp.

Here are some updates:

I redrew my wiring diagram to simplify. Pretty sure my wiring is according to the Inovelli diagram for “Line/Load in separate boxes (neutral wire setup)”. 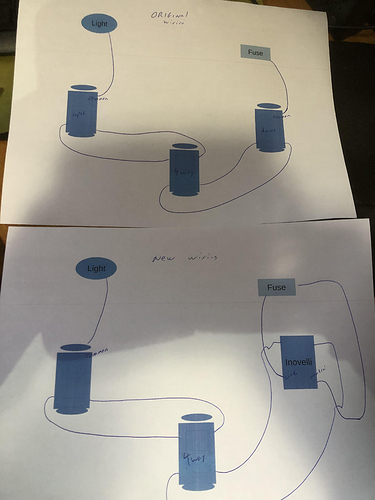 As mentioned - connected to Smartthings, neutral set to yes, AC type to 3 way toggle and I installed the latest Inovelli device handler.

Getting a feeling it is not wiring but something in the switch - a parameter or faulty switch.

The behaviour of the switch is not right and kind of hard to document:

There are other funky behaviours and they occur both using the paddle and Smartthings. I also deleted the Smartthings device to see if it was Smartthings related but still poor behaviour.

It sounds similar to the issues you get with the neutral and AC type parameters not set but I have reset them multiple times both using the switch and Smartthings.

Hard to say. There are issues with settings “sticking” as you’ve noted, but you have this funky “neutral from somewhere else” thing that could be weighing into the mix.

I understand that you pulled a neutral from a nearby receptacle instead of the light. Is that neutral on the same circuit as the light? If it isn’t that at least in the US, that’s a code violation and unsafe practice.

Did you pull it using Romex? Can you pull a hot too? My prior suggestion still stands. Pull a hot and a neutral to the first box, not just the neutral. Then at the light, cap off the hot and neutral (or just send it downstream if that’s what it’s doing). Your new feed will be from the receptacle. You’ll send the load back to the light with a neutral via the 2 existing conductors.

That may or may not solve your problem . . hard to say at this point. You may be correct that wiring is not the problem. But at least it will be wired correctly, possibly eliminating a code/safety issue. I’d recommend you eliminate the wiring funkiness first, eliminating that as a possible source of the problem.

I could try pulling neutral from one of the lamp bases as a test. (very difficult to get at the actual lamp Romex).

I know it would just be to rule out the independent neutral, but I am thinking that the neutral only I am taking from the outlet and the neutral for the lamp all connects back to the same bus even though not through the same wire.

Thanks for the suggestion, I will try it tomorrow (it’s worn me out for today).

I am thinking that the neutral only I am taking from the outlet and the neutral for the lamp all connects back to the same bus even though not through the same wire.

Your comment is right on point with what I was trying to emphasize. You should not use a neutral from one circuit with a hot from another. There are reasons that the practice violates code (at least in the US). The fact that the neutrals wind up on the same bus doesn’t matter.

But don’t try to pull a neutral from the lamp. Just pull the hot from the same receptacle you pulled the neutral from as I suggested. If you used 2-wire Romex, you already have. If you used a single conductor like THWN/THHN, then pull one more. You are removing the light from one circuit and adding it to another. (I’m thinking you are not in the US so I’m unsure of your wiring.)

In one case flipping a 3 way to off the light goes on and then a click and it is back on.

Pretty sure it is either a faulty switch or some odd underlying parameter setting. BTW, I removed all LEDs and just left in a couple incandescents as I read that can be a problem.

Pretty sure it is either a faulty switch or some odd underlying parameter setting.

Swapped in a switch that was working in another location and the thing works fine so definitely the switch is faulty.