I’m usually pretty decent at wiring my switches but this one 3 way has me stumped. At the box with power I have 6 wires(plus 2 grounds). At the other box I have the same, but on the original box many weren’t used and were just capped off. Honestly, I’m not sure I have neutral at the line box, but given 6 wires I would think one of them is.

Line Box= The top left is line, all the others have residual loads or nothing. The two black in the wire nut, 1 is constant 120, and the other nothing. If I undo the wirenut, the line to the switch goes dead. 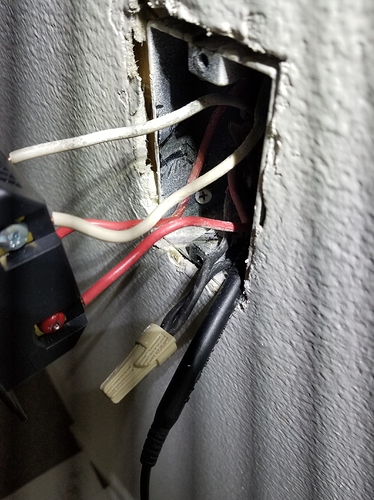 In this one, the two cables coming in originally connected to the switch, one has Red/White/Black and the other only White/Black. I have tested a dumb switch on line box and found the two traveler wires.

I have tried hooking this up every way I can figure. I can get the switch on and turn lights on/off, but moving wires around 20 different ways, it consistently won’t let me turn the dumb switch off and still use the dimmer. I’ve even hooked up a Dumb Smart Switch and it won’t work at all…Help please! 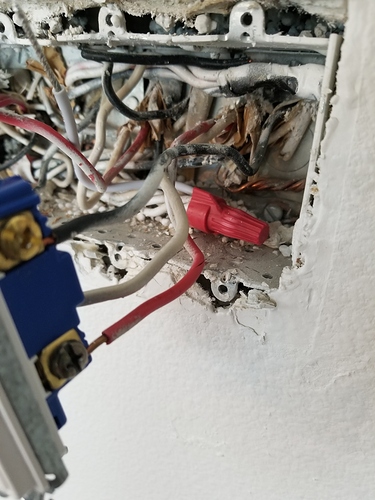 Can you re-wire a regular dumb switch in the first box, let’s call that Box A and take pictures? Basically show how it was when it was working before you got started on this project. I’m referring to the box with what you describe as the 6 wires. Is that two 3-wire Romex? Pull the switch out also show pictures into the box so you can see everything going on. It’s easier to start with a working dumb switch configuration.

In the other box, let’s call that Box B, are the red, black and white all from the same 3-wire Romex. Also, is that switch wired as it was when it was working? If not, put it back how it was to start with and photograph as well.

Also, what are these switches powering and can you get a/the box(es)?

I rewired them back to working order.

These pictures show the main box. You have 2 sets of 3 wires coming in, red, white, black. On both sets the black are wire nutted together. which stop the switches from working if I take the nut off. 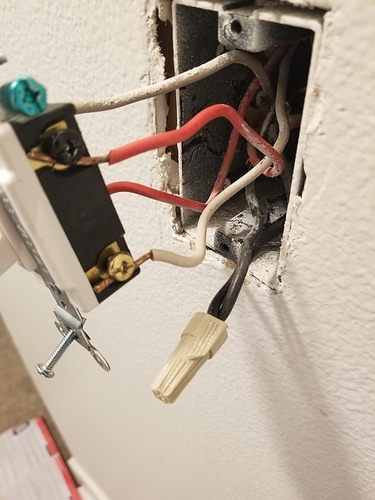 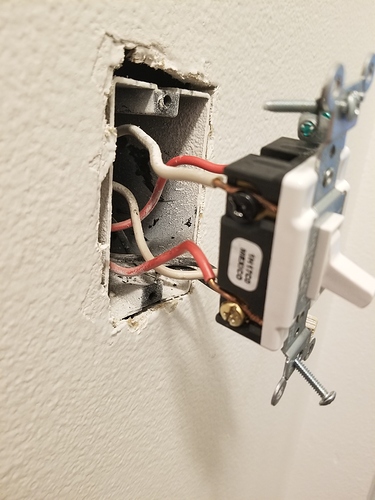 The other box is a bit more weird; two sets of wires coming in. 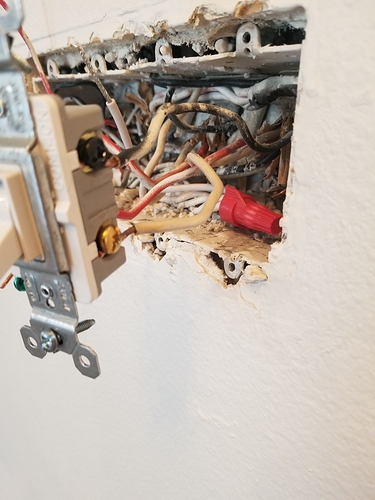 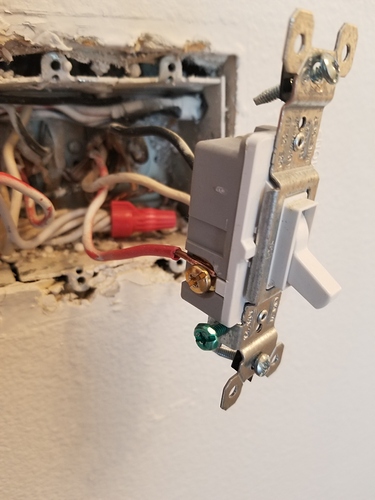 Well, the first thing that hits me is that this isn’t a 3-way, it’s a 4-way. Or at least the single box switch is a 4-way switch. How many switches control the lights?

Only two switches. This is an older house that someone redid last year before we bought it. They had an electrician come in and re-do much of the electrical. My guess is there was another switch around the wall in the kitchen before they opened it all up and removed one there.

Haha, nevermind. Don’t go down often and of course you’re right. There is a switch downstairs controlling it. Red, White and Black all hooked to the switch. One romex nothing else. 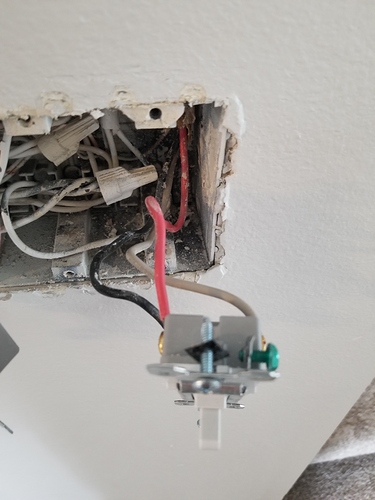 Ok, here is a starting point, at least.

So let’s go with a switch removed. I think you have what used to be a 4-way installation. I’ll tell you what it feels like and then you can test to verify. Once we’re certain, we can figure out the Inovelli wiring.

I think that you have power starting in the multi-gang box. If I understand you correctly there is a 2-wire and a 3-wire there. The 2-wire is going to the light. The black on the 2-wire is on the black terminal of the 3-way switch and the accompanying white is bundled with other neutrals.

Still in the multi box, you have a 3-wire with the red and the white terminals connected to the brass terminals. The black on the 3-wire is connected to a constant hot. That 3-wire is going to the four way switch.

So as I’m writing this I wonder how you remove the third switch and get this to work. I think you could wire two conductors together and cap off a third.

In any event, if I am correct, your diagram looks like this. The only thing that is different (besides the missing switch), is that in the diagram, the hot is sent to the far switch via the whites, whereas in your case, I think it’s via the blacks. Color doesn’t matter, it works the same. 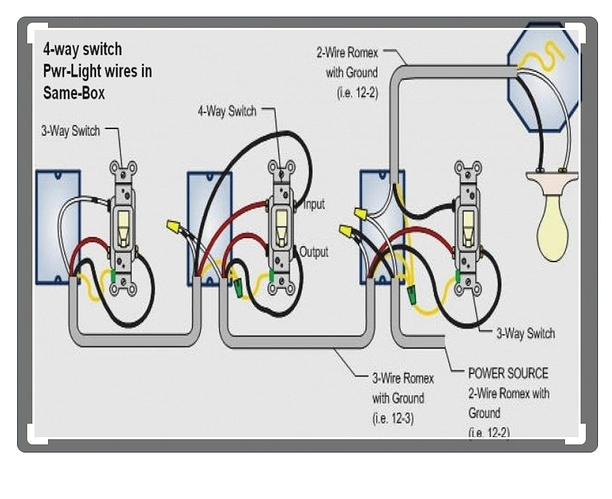 See if this makes sense. You’ve already confirmed the constant hot and it makes sense that the lights don’t work if you untwist them in the multi-box.

So I’m not sure how this works without the third switch. Also wonder about the Romex going away from the light, although I suppose a light could have been removed too.

One test you can do is to pull the black off the switch from the 2-wire in the multi box that I believe is going to the light. Using a meter, check for voltage between it and the neutral. Also check between the black and the ground. I’m guessing 0V in either case. If that is correct, touching the black to the black hot bundle will turn the light on.

I added another post right after my last one that confirmed you were right. There was another switch I never knew about.

I also tested as you said, Black off switch, tested against neutral/ground and in both cases it’s 0V

I also tested as you said, Black off switch, tested against neutral/ground and in both cases it’s 0V

Bundle that black against the hot temporarily. The light stays on, right?

correct. The light turns on.

I’m guessing the black on the newly discovered switch is connected to the black terminal.

So here is what you have: 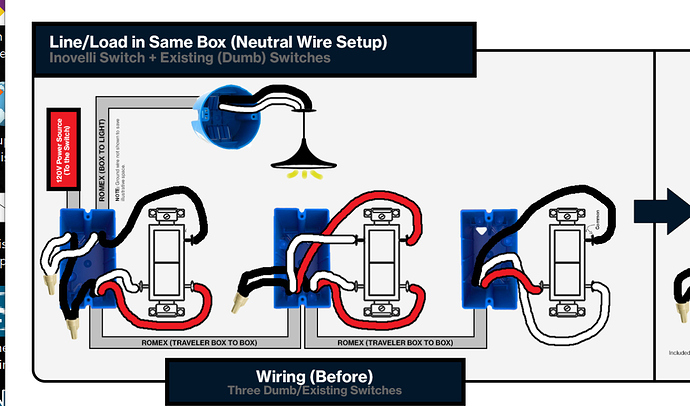 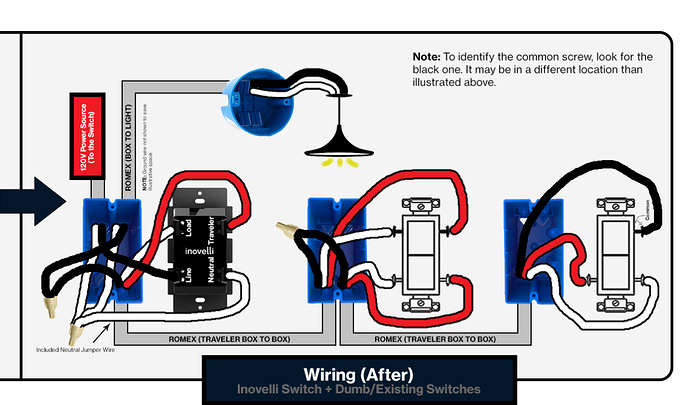 Well…I still can’t get it to work. I left switch 2 and 3 in the same position as in the picture, box one I added a black to the hot to bring to line along with adding a neutral. I also got both blacks from the two Romex packs and put them together. Red is to Traveler and White to Load.

With one switch on, the LZW31 works perfect, if I turn either switch off then the led is still on from the LZW31, but tapping it doesn’t actually turn the light back off or back on(the LED does move). Turn either switch and it works again. I tried moving the other white to the neutral pack and the other to Load but same thing happened. I did verify the wires from White/Red in box 2 are on the same color screws from the same Romex pack. Black wire in box 3 was on Common Screw as well.

I also went into configuration and set the switch to Neutral and Muti-Switch(Dumb). Even factory reset and did it again to make sure. Pain to make sure it’s correct as I can’t find in Vera where to see those if possible. But I did verify and they are correct.

That sounds correct as you describe it. Maybe post pictures of the Inovelli. Enough that we can see into the box and see the 2 and 3-wires as well.

In the meantime, hopefully my associates will be along shortly, lol.

Here are some pics. Sorry, so many wires in this. 4 Gang and only two switches. Half of them are just capped off so they take a lot of room. I did look in the light and it was a white romex going out, and the white coming in the pictures are correct per your diagram on where they go if coming from the light. Black romex coming in matches the Black in Box 2 and all looks correct per the diagram. 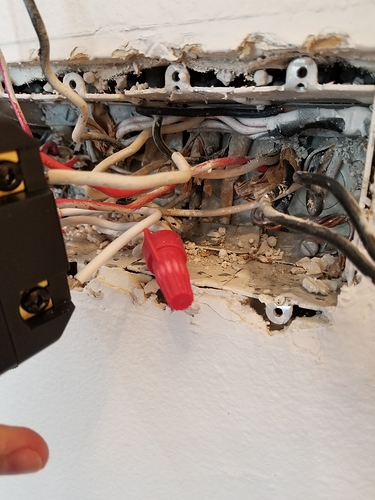 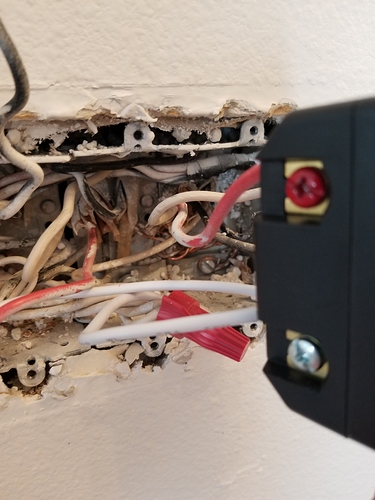 It’s bit difficult to tell from your pictures. Did you pigtail from the constant hot black bundle with a white connector? That’s in the Line terminal, right?

The white from the 2-wire is attached to the white neutral bundle?

The two blacks going off to the right are the blacks from the 2-wire and the 3-wire?

Double-check your backstab connections. The conductors should be between the moving plate and the screw.

Yes, it’s a white wire that if all worked I would tape it all black(couldn’t find my black wire reel) and yes to Line.

White from the 2 Wire is to the Neutral Bundle, Two blacks bundled are from the 2 and 3 wire bundle. I’ll double check all connections

I double checked all connections and looked over everything again, all looks good. I’m going to swap my Red for another one just in case it’s defective.

I replaced the switch with another red, redid the settings and same problem. For the life of me I cannot figure out what is wrong.

What type of bulb is in the fixture? If it’s a LED, can you swap it for an incandescent?

You can also try reducing the maximum dim level, although that addresses a separate issue.

You can also try temporarily configuring as a 2-way i.e a single switch, since you have a line and load in the same box. Completely remove the 3-wire from the switch. Keep the existing line and neutral. Connect the black from the 2-wire to the Load terminal. Then reset the switch type parameter to single pole (0).

I am so confused over this. I have have new incandescent bulbs in, no change. I configured as a 2 way and it works just fine. go back to 3 way and it’s like the travelers aren’t working since if I switch either dumb switch then it affects the lights and either lets the smart switch work or not.(though it’s always powered).