HELP! I’ve got a situation that I can’t figure out. I’ve got a Red Gen 2 Dimmer switch with a GE Aux switch in a 3-Way Installation with no neutral wires.

Each box has only the following wires: 1 ground, 1 traveler, 1 line and 1 load wire; there are no other wires available- I’ve included pictures of the 2 switches I’m trying to replace. Is there any way for this to work? It seems like all of the wiring diagrams have more wires than just the 4 that I have at each switch. I’ve been working on this for hours, and can’t seem to figure it out… 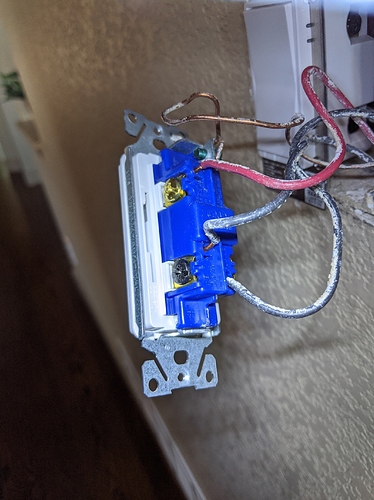 Do you know if your setup is line/load in same box or separate box?

Setup should be similar to this.

Hey Jonathan. Let’s get a better description of your wiring. We’re not going to use the Line, Load and Traveler terms as they refer to conductors. We really want to know what cables are in each box.

When you pull out the switch I want to know how many CABLES i.e. probably Romex are at least partially attached to the switches. I can’t see into your boxes (which would be helpful, btw) so you’re going to have to describe. Or better yet, pull the switches out and take pictures so that we can see into the boxes.

The way you described it sounded like there is only one 3-wire Romex to each box. But I’m not so sure because it looks like in the image you linked to there is a black, a red and ?? another black??. Or what is the color of that third conductor.

You should be able to post more pictures now, I think.

Hi Guys- thanks for the quick replies! I only have 4 wires… 1 Red, 2 Black and 1 Copper. This is the same configurations in both switches. Unfortunately, I can only post 1 image since I’m a new user 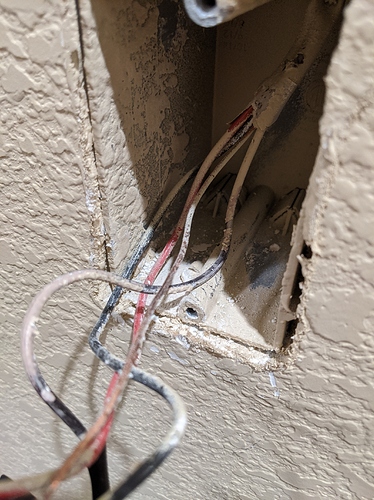 Actually,now that I think about it, the other switch box does have a neutral wire available - for the other unrelated switch (ie: not related to this project). 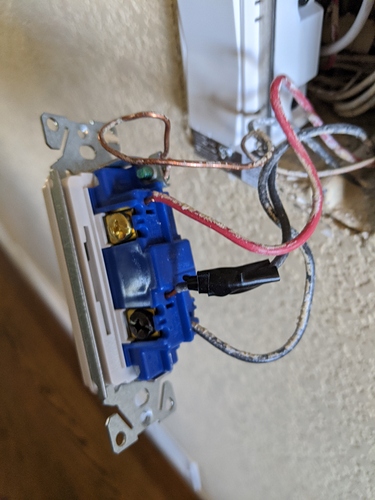 @harjms - Unfortunately, I’m not sure if the line/load is in the same or separate box.

Ok, so it’s obvious that the single box has one 3-wire Romex.

Still can’t see into the double-box. Still want to see how many cables are attached to that switch. Pull that thing out as far as it will go and take a picture so we can see in the box. I know you are thinking it’s one cable, but I see two blacks, which leads me to believe there are TWO cables attached to this switch. I’m pretty sure they don’t make cables with 2 black conductors.

I’m guessing you didn’t put the electrical tape on the one black conductor? There is a reason your electrician did that.

@Bry - Ok, I will have to get a picture of the double box-tomorrow. I’ll pull both switches out of that double-box and get some good pictures for you. As far as the electrical tape- yes, I was the one who put that on that wire, because it was the hot wire when I was testing.

Thanks again for everyone’s help!

In the single box photo, as Bry said Romex is not made with two blacks. So either someone did something funky with a short piece of cable or there is another Romex behind this one. However if that is the case, where is the white that would be with it?

Here are 2 more… tried to move some of the wires around to get a better view… It looks like the switch is currently getting black wires from 2 different Romex cables. One of those Romex cables (with the black cable looks like it also has a neutral), while the other doesn’t. Hopefully these photos are clear enough to make some sense out of the spaghetti. 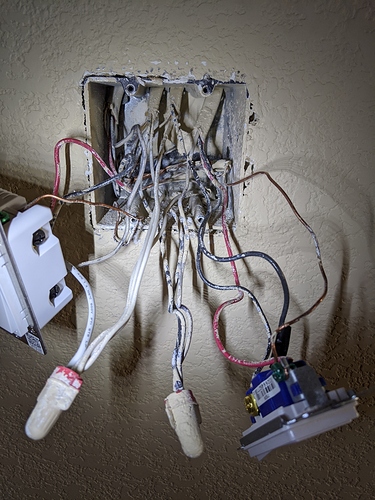 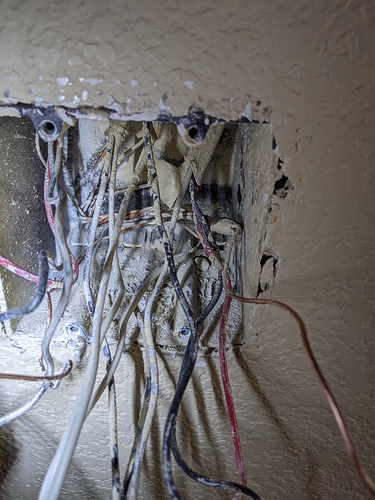 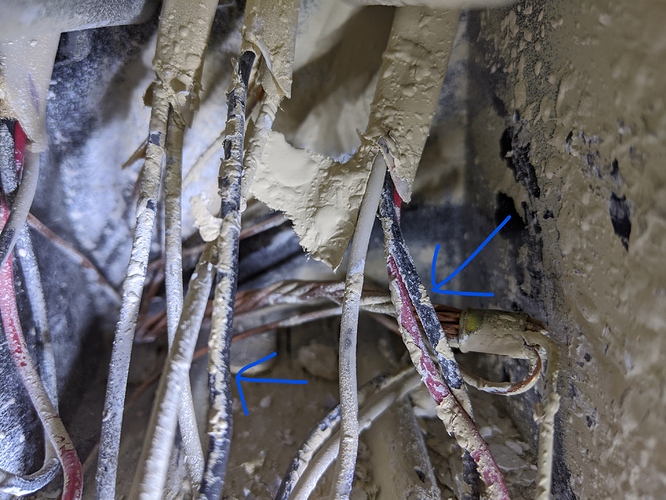 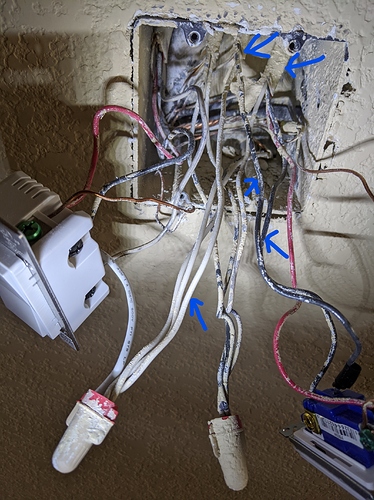 1 - In the double box, you put black tape on the conductor that’s going to the black terminal on the dumb switch, right? That’s good, leave it there. That conductor goes to the 2-wire Romex, correct? Confirm these.

2 - In the single box you have one 3-wire. Strip back some of the sheath to expose more of the conductors. Just yank on it to pull it back more like pealing a banana. See if one of those three conductors is actually white but the exposed part may have been painted black.

Let us know what you find.

I am thinking that you have a constant power, Line to the double-box.

@JohnRob Some electricians paint the white conductor on the 3-wire black. Not sure why but maybe because it’s potentially hot because it’s a traveler. Confusing though.

1 - Yes, the black tape is going to the black terminal on the dumb switch and that wire goes to the 2-wire Romex, correct.

2- In the single-box, I stripped back the sheath, and yes, it looks like a white wire. 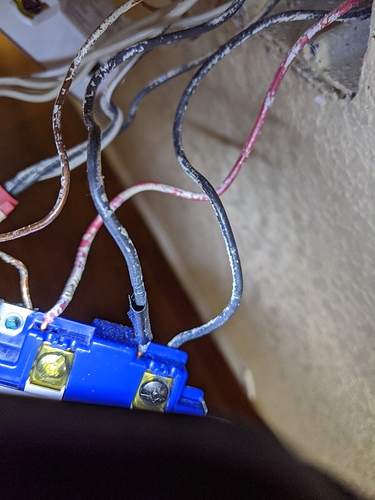 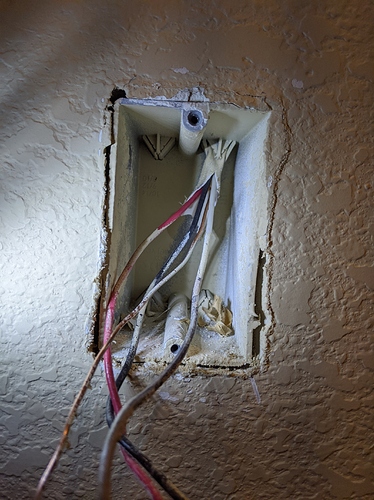 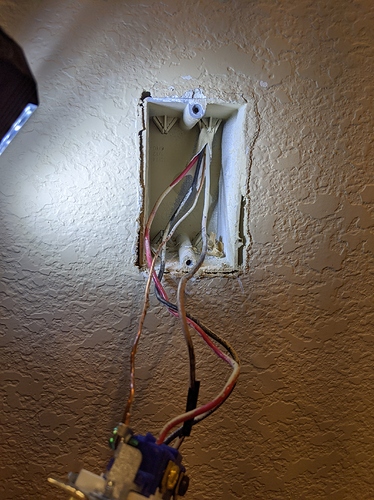 @JohnRob @harjms John, James, I was thinking the hot is being fed to the double-box via the black 2-wire, but if that’s the case the white from the 3-wire should be sent as a neutral to the lights of the other box. Instead, it’s bundled with 2 blacks. Thoughts?

@JonathanL In the double box, pull the black from the 2-wire connected to the switch and using a meter, test for 120V between it and the white from the same cable. Just pull the wire nut off the white bundle. I’m not sure if you’ll have voltage or not. Test with the single box switch in both positions.

Not exactly sure what you have going on here yet. 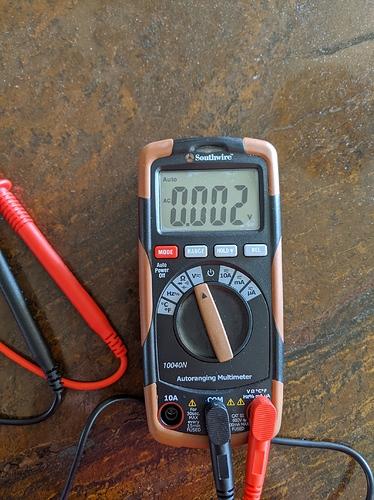 I took a quick look and the double box and sketched this: 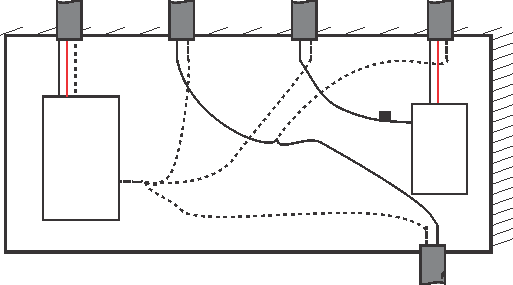 I didn’t have time to flesh out the switch wiring. I would assume one of the two 3 wire Romex is the other end of the single box cable.

Not sure if it will help, but I can try to get better pictures of the wires coming out of all of the different Romex bundles.

I think the only photo that would help me finish the diagram is the back of the two switches with enough field of view to be able to see which white(s) is which in the left hand switch.

When making measurements it is often more useful if you measure from whatever wire you are measuring to the equipment ground (bare wire).
Reasoning: The bare wire is always 0 volts, a white may or may not be.

Another note: when you measure an open wire (i.e. not connected to either a load, neutral or line) the meter will often read some voltage maybe up to 50V. This is due to magnetic pickup from other wires. There is no energy there but it can be confusing.

Reasoning: The bare wire is always 0 volts, a white may or may not be.

@JohnRob Agreed. Just so you know my thinking, I wanted to see if that 2-wire Romex was a constant hot. If the Line is coming from the lights, it would be without a neutral and either the black or the white measured would be hot measured with the ground, so I had him check the neutral to be sure.

I’m sure you are already thinking this is a possibility, but I wonder if the hot is being sent up the three-wire in the double box via that black-black-white.

@JohnRob, so you want pictures of the back of the left switch in the double-box, even though it’s not related to the lights or switch in the one-box at all? Just want to confirm. Also, due to being a new member, I’m being restricted to the number of messages I can write/reply… so, not sure when I’ll be able to reply, but I will ASAP.

I’ll get these additional pictures later tonight after the rain stops or tomorrow. My wife wanted the lights back on because it’s pretty dark here with the thunderstorms moving through, so I had to temporarily put everything back together and restore the power to these switches… Thanks again for everyone’s help! I really appreciate it!