Good afternoon! I have an issue with my new LZW31-SN dimmer switch. I have it rigged in a 3 way, neural wire set up. It is the 3-Way Installation (Load In Both Boxes) with a dumb switch on the other end. I know my wiring is correct as I checked it via multimeter prior to turning power back on post install.

I turn the power on to a switch whose red LED notification bar is constantly flickering red. I also hear a slight humming from the switch as well. Holding config does nothing, toggling the other switch does nothing, I can’t think what else to try. Worse, I see nothing online anywhere about this issue.

Does anyone have any ideas?

For me to help I’ve found I need a clear understanding of which configuration you have wired. Is it possible you could make a quick sketch? I usually used a dashed line for white and do not draw in the bare copper wires. 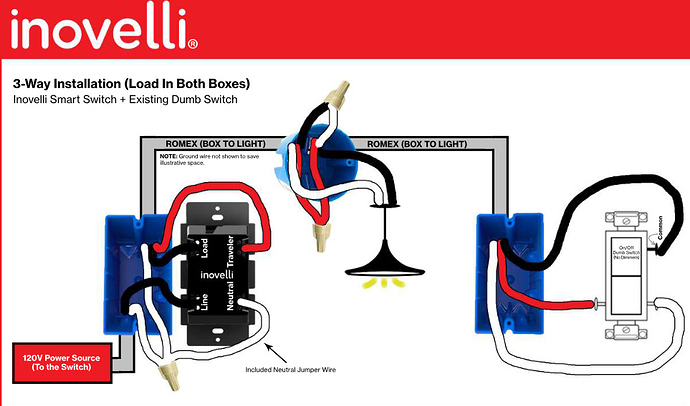 Apologies, this is the exact wiring diagram I followed while installing. It matched my set up perfectly from what I could tell.

I can draw it as well, but figured it’d be easier to link this pic as this is what I have installed.

@harmfulmushroom - The indications on the switch does not sound very good. I haven’t seen or come across that issue either. If you have it wired correctly, and the flow is correct, I would say it may need an RMA. It doesn’t even sound like it’s booting up. Can you verify correct voltage input?

Yeah, this definitely doesn’t sound right @harmfulmushroom – let’s get it swapped out for you. Can you either shoot me a PM with your order info or reach out to us on our site and submit a ticket? I’d like to look at it to see what’s going on.

Do you happen to have another switch handy to test to see if it exhibits the same behavior?

Sorry about this, we’ll get you taken care of either way!

No worries at all, that was beginning to be my thinking as well! It happens, I unfortunately only have that one to test with, but should be getting my second here shortly. Will re-test with that guy and go from there. For now, dumb switch is back in and all is working fine for now.

I’ll reach out to you via PM as requested, would be cool if you do happen to figure out what happened!

Agreed, no need to make a sketch, besides Eric has it covered, as always.

I am having a similar issue to the OP. I have the same 3 way switch set up and I originally had Philips Hue lights in the fixture. When I turned the switch on, they would flash on and off. I decided to swap the lights out with some regular dimmable lights and now the switch flashes red when the other switch is on. When it is off, the Inovelli switch doesn’t do anything. Holding down the config button doesn’t do anything.

I am pretty sure I wired it up correctly but this is the first time installing one of these switches so it is possible I did something incorrectly.

Any ideas on what I should check next?

I am pretty sure I wired it up correctly but this is the first time installing one of these switches so it is possible I did something incorrectly.

Any ideas on what I should check next?

If you want to get some eyes on your wiring, you’ll need to post some pictures with the switches pulled out, so that we can see into the box as well. If you have pics with the original dumb switches, please post them.

I would start a new thread so you don’t hijack this one. Re-describe your problem there.

@matthewj Sorry I forgot to update this post, I figured my issue out and I’d imagine you’re likely having the same problem. I misread my wiring as having a neutral when it in fact did not. This ended up being my wire diagram in the end, and I’ve now set three of these switches up successfully: