Is there a way to make sure that the bypasses are doing what they’re supposed to be doing? It’s weird to me that wiring them in seems to have no impact at all on the functionality of the smart bulbs.

The bypass should be wired at the fixture between hot and neutral.

Can you screenshot your automation? Did you use a blueprint?

The bypass(es, as I’ve tried as many as three) have been at the fixture between the hot and neutral. I’m just wondering if there’s a way to confirm that they’re doing anything, as I’ve yet to notice a difference when there’s one (or more) plugged in.

Here is a link to a screen capture of part of the automation I set up using a blueprint. Here is a link to a capture of the scene referenced in the automation. I have to admit that I’m not sure how this makes a difference, as if there’s power to the smart bulbs, the switch does not function - it just cycles through the red/green/blue on the led and buttons don’t do anything.

If I put the “traditional” edisons in the fixture attached to the switch so it works and put the Feit smart bulbs in another room, the bulbs work the way that they should. The problem right now is that I can’t have the Feit bulbs in the fixture - even with one or more bypasses in the fixture, too - and have them function.

So these bulbs intrigued me so i grabbed one from the hardware store. I can confirm they do not work with a single bypass (that’s all i have). It does work with an incandescent connected to the load too. The bulb also works in a neutral configuration without a bypass or incandescent.

@Bry have you had varying results with different bypasses? I’m using the aeotec.

Edit: i did try the feit with a random led also connected to the load and it did not work.

Edit 2: LZW-42 with a single bypass works in non neutral

stu1811 - thank you! I’ve spent the day feeling like I’m either incredibly stupid or utterly insane. While either/both may still be true, by replicating the problem, you’ve at least taken this load off my shoulders. Thank you!

I’m also using the Aeotec bypasses, for what it’s worth.

Honestly I think Feit bulbs (non smart) are the most finicky bulbs when it comes to dimmers and smart dimmers. I had difficulties that ended up the bulbs being donated to Habitat. I now avoid the brand. It’s a shame because the prices at Costco were pretty good.

@Bry have you had varying results with different bypasses? I’m using the aeotec.

I only have the Aeotec and that’s only for my bench. I do not have any non-neutrals IRL.

I’m still thinking it’s the bulbs, as @harjms mentioned. There is a reason a manufacturer specifically mentioned they are not recommended for their product. Unforunately, all LEDs aren’t compatible with all smart switches. Additionally, smart bulbs also have radios, adding an additional layer of complexity to the non-neutral configuration.

IMO your best solution here is LZW42’s and Smart Bulb Mode. While a bit of a premium on the bulbs, you get local (non-hub) control via z-wave association and the bulbs are FANTASTIC. Buy once, cry once.

Highly recommended, and then you can incorporate circadian rhythm and other fun colors!

That would work, but @sylbaris is looking for a decorative bulb. I’m guessing since he has tried the linked bulb and Edison bulbs, the fixture exposes the bulbs so the LZW42 wouldn’t look so good. Unfortunately, a colored spiral filament compatible smart bulb is a unicorn.

@Bry @harjms what about converting the wiring from a switch loop to passing hot and neutral to the dimmer and not connecting a load? Since the bulb is controlled via wifi it should work. You won’t get energy readings but the dimmer won’t reboot.

Thank you all for your input! It sounds like I’m just out of luck in these rooms with their old wiring and old, bare bulb fixtures. As I can’t redo the wiring and the bulbs have to be decorative, I’ll have to go back to a dumb switch with smart bulbs.

While my ignorance is pretty apparent, I’m still curious as to why the bypasses don’t work with these bulbs. I understand the idea of software compatibility, but I don’t understand how these are electrically incompatible. I was under the impression the bypass just forced the the line to pull more power, giving the dimmer more to work with. Is this where the radio @Bry mentioned comes into play?

@stu1811 - is yours the same suggestion @PJF made earlier?

You could wire the light to put full time power to both the light sockets and the dimmer box and then just hook the dimmer up to line and neutral. This isn’t to code so it’s a do at your own risk thing.

If so, I’m not sure I’m confident in my ability to pull that off in any sort of safe way. The “do at your own risk” part gets me, I’m afraid.

I can’t say this enough - thank you all for all your time and expertise! You all are incredible!

@Bry @harjms what about converting the wiring from a switch loop to passing hot and neutral to the dimmer and not connecting a load?

That would work just fine and in the US with the NEC, I do not believe there is anything that prohibits that. Only ballast type lights require a switch. This is NEC, and local codes may vary.

That being said, I recommend against this to non-electrical-experienced users. In that circumstance, the only way to cut the load is via the breaker, and the uninformed may presume the power is cut if the switch has turned the smart bulb off or the air gap is pulled. Obviously, with this configuration, that is not the case.

I’ll have to go back to a dumb switch with smart bulbs.

You realize that’s not a good solution, right? When you use the dumb switch to turn off the smart bulbs, they are no longer smart bulbs, because you’ve cut the power to them. You mentioned that you want voice control implemented, but Alexa won’t be able to turn on a smart bulb that is not powered up. Additionally, at least at one point, there was some thinking that constantly making and breaking power to a smart bulb would reduce it’s life span. I’m not sure that is true any longer, however.

One solution to keeping the dumb switch would be to put a guard over it so that it is not used. Turn it on and leave it alone. Then control the bulbs via the hub or Alexa. 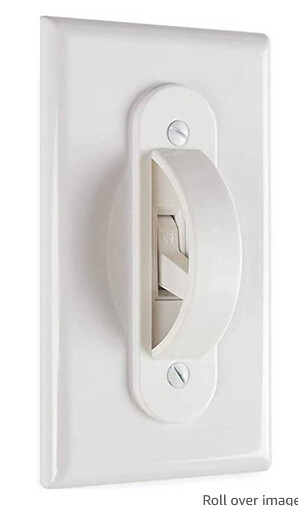 Thanks for the follow-ups, @Bry!

I know some people who claim to be electricians, and I’ll talk to them about this wiring solution and getting their help to implement it. Neither of them are available often, and they’re both flabbergasted by the problems these smart switches and bulbs present. Turning it into a wiring problem, however, could be the bridge we’ve needed.

In regards to using a dumb switch on smart bulbs - I’m well aware of the limitations of this “solution.” It’s the one we’ve been using in my son’s room for months. He knows that if he wants to use Google to change the colors, he has to turn the lights on first. We would both much rather have these switches work like they do in the parts of the house with newer wiring - three clicks up means party mode in three other spaces - but it sounds like these switches are not an option in these rooms, unless I’m missing something.

Possible solutions - as I understand them - are:

And that brings me to this forum with all of you lovely people. Your patience with helping me come up with solutions has been spectacular. If you have any other ideas or if I’m overlooking one, I would love to hear about it! These dimmers are awesome, but my house is old. They apparently don’t play well together!

As @stu1811 and @PJF mentioned, if it was my house and I was the only one who changed bulbs in the house, I’d rewire at the light fixture to send line and neutral to the smart switch understanding that if I ever needed to change the switch, I’d have to open the breaker at the load center. This will only work for smart bulbs so if you sell your house in the future and take your bulbs, you’ll have to remember to rewire it back to original configuration so that a dumb bulb will be switched off via wall switch.

In the light box you will likely find some cables entering the box and each will have a white and black wire. Right now, you’ll find some whites connected together and some blacks connected together. But, you will also see a white connected in with the blacks and the black wire from that cable is being used to feed power to the light. That cable is the one going to the switch box and is called a switched loop, no neutral.

So, you connect all the black and white wires together including the light. At the switch box, you hook the black and white to the line and neutral terminals. This puts power on everything all the time. The dimmer can then be used as a scene controller only.

@PJF, this description is in just the language I need - thank you!

If I’m understanding this right - that every visible wire in the fixture box is connected - the two wires in the switch box are essentially interchangeable, right? It doesn’t matter which ones goes to the neutral and which one goes to the line, correct?

You all are the best. Thank you.

Well, electricians use the white for line power on a switched loop so that later an electrician can know that it’s a switch loop since the white is live. If you feed line power to the box then black should be live and white should be neutral.

Apologies for the delay in response, but I haven’t been able to give this project my full attention for a couple of days.

I will admit that I gave myself a bit of a shock when I tried to pull this off the first time, but thankfully a friend of mine was able to walk me through what all the wiring actually did. Once I had that understanding, I was able to do what @PJF suggested (rather than what I thought he suggested).

What not to do - tie literally every line together in the box. This makes a big nasty spark. It also helps you to realize you’re an idiot.

What to do - tie all the blacks together (which makes all of the blacks the line and therefore “hot”) and tie all the whites together, making them all neutrals. Keep them separate. This means the black coming down to the switchbox is, indeed, the line, and the white coming down to the switchbox is the neutral. There is no load, because the two entities - the light and the switch - are essentially independently wired.

(This is assuming that you only have one “hot” line coming through the light box. My friend told me that I’ll probably find a mess of wires in the next box I try, and that I need to be sure to find that point at which the black line is crossed into the switched loop, no neutral.)

Thank you all for your time and patience! Clearly, I need to work on my reading comprehension.

Glad it worked out in the end.

So, you connect all the black and white wires together including the light.