I just installed the Inovelli LZW36 | Fan & Light Switch… I wired everything correctly. However when I press the Light Button both the fan and light turn on, when I press the Fan Button both the fan and light turn on. I haven’t even attempted to pair it with a Hub, only installed the receiver in the canopy and the switch in the wall. When I pulled the Air Gap and pushed it back in, the fan after pushing it back in made a hummmming noise, for a few seconds, building up and then a “pop” sound. No idea what it was. Photos are to show I only pressed the Fan Button but both fan and light are on. Anyone else have this issue? When I attempted to dim the light it did not dim but the switch showed the status led as if it was dimmed. I was then able to turn the light off, and the fan was still on high… and I was able to step down the speed on the fan as well. But once off again, pressing the fan button turned both back on. 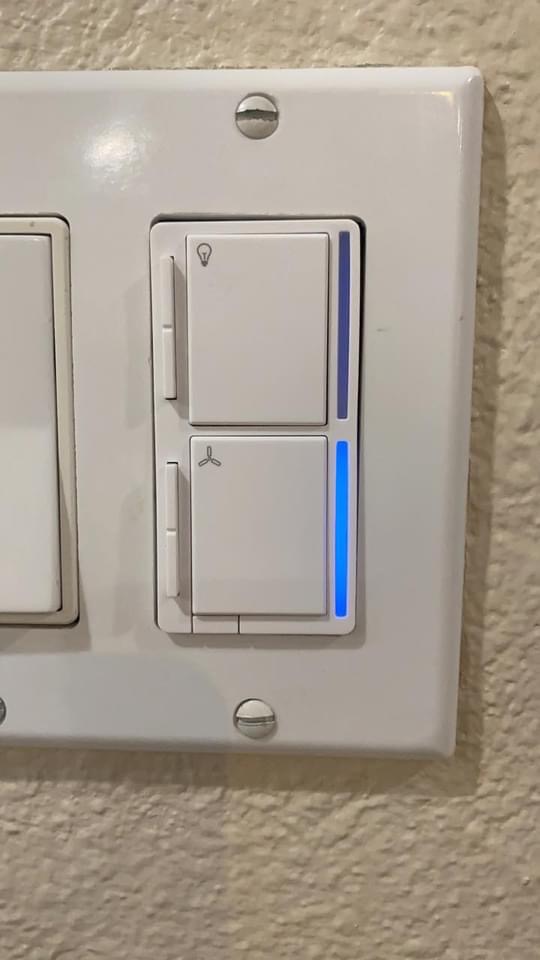 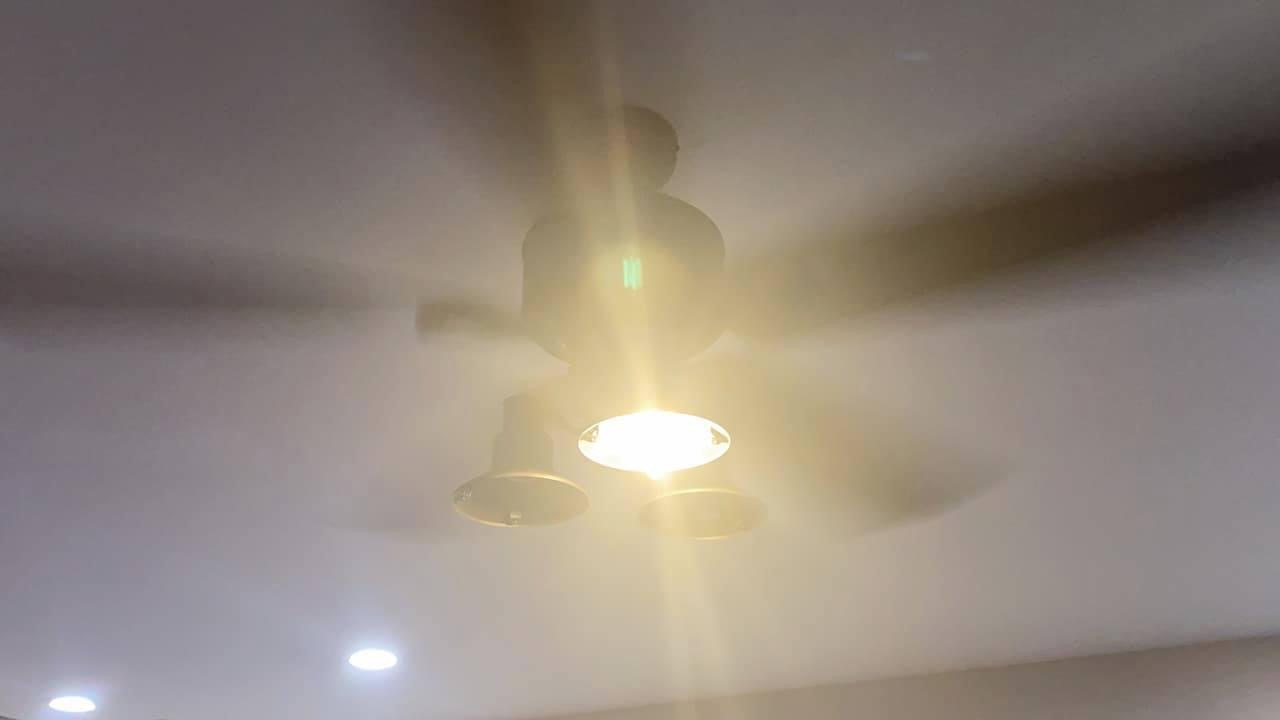 Okay I just had a thought, not sure if this would have affected it. I actually installed the Canopy Receiver last night and the switch tonight. So last night I was curious and flipped the dumb switch, nothing happened, I got a bit more eager, I pulled one of the chains, nothing happened, about 30 seconds later the fan began to pulsate, the light pulsed. I turned it off after a few minutes and went to bed. Forgot about that. So tonight when I wired up the switch, and turned the power on I’ve only touched the switch. Not the pull chains. Would that have anything to do with what I’m experiencing?

This is the more current version of a cross-post . . .

You’re going to have to provide more details.

Found the other thread in which you discussed this. Your fan is the one below. That fan has a remote. Did you remove the old receiver and substitute the Inovelli canopy module? If so, how did you cross-reference the Inovelli’s canopy output wire connections to the fan’s motor/light connections?

I just installed the Inovelli LZW36 | Fan & Light Switch… I wired everything correctly. However when I press the Light Button both the fan and light turn on, when I press the Fan Button both the fan and light turn on. I haven’t even attempted to pair it with a Hub, only installed the receiver in the canopy and the switch in the wall. When I pulled the Air Gap and pushed it back in, the fan after pushing it back in made a hummmming noise, for a few seconds, building up and then a “pop” sound. No …

This page says that the Sivan has an AC motor:

When you flipped the dumb switch, which one? Did you have two, one for the fan and one for the light? EDIT: Looks like one based on the fan model.

Originally there was a single switch that controlled power to the fan. I actually replaced the entire fan during this process so it was like a new install. The previous fan did not have a light.

Do you have a 3-wire running between the switch and the fan? (That’s 3 conductors plus a ground.)

In the Canopy I have these wires: black, red, white and ground.

When I opened the switch plate at the wall, the switch had two blacks, I did see inside the j-box the red wire was connected to a bundle of other blacks. I grabbed a neutral (white) and then also just connected the two blacks to the switch, plus ground.

How did you wire the canopy?

I wired it exactly how it had shown in the instructions, except that I had the extra red wire which I connected with the black (hot) 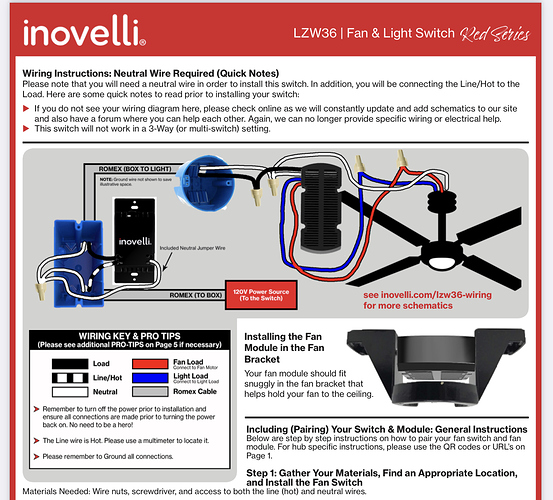 Aren’t all three lights supposed to go on at the same time? Were all three working before you got started?

I originally only put 1 bulb in to test things, I had plans to get different bulbs. All three work. 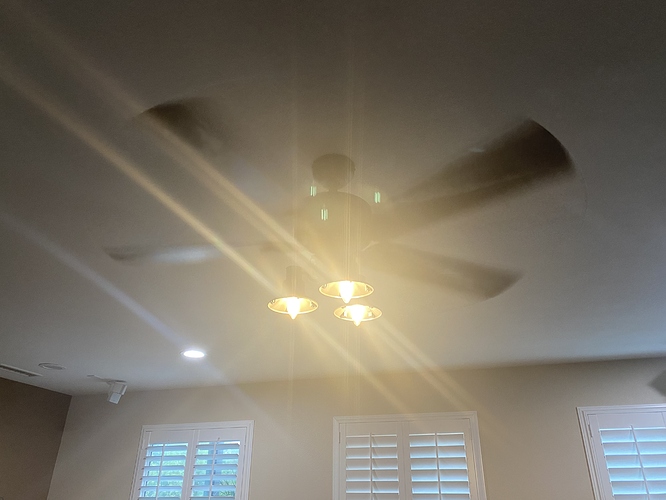 Where did the “pop” come from, the switch or the fan?

Came from the fan, however the behavior has been the same before and after the pop, There has been no change in how it has been responding, meaning the pop doesn’t seem to have affected it.

Did you remove the old receiver and substitute the Inovelli canopy module?

The original receiver wasn’t installed, instead I installed the Inovelli receiver. The fan was a new install and the remote/receiver was in another bag in the fan box which I set aside. The only difference I noticed on that receiver vs the Inovelli was that it has a neutral coming In and going Out, on the Inovelli it just had the one so all neutrals got wired together.

how did you cross-reference the Inovelli’s canopy output wire connections to the fan’s motor/light connections?

Which sounds like I need to reopen the fan to verify everything.

Yep, it sounds like there might be a slight mis-wire between the Inovelli canopy and the fan.

You’re correct that there is only one neutral so they all go together.

Presuming that you have a constant hot and neutral wired to the Inovelli canopy module’s white and black, then the module is powered correctly.

So on the output side of the Inovelli canopy the blue is the light and the red is the fan. What do you have on the fan side? I’m a bit confused because you mentioned having an extra red. You said that you connected that to the black, which is constant hot and probably isn’t the proper connection.

With the neutral from the fan connected, you should be able to temporarily touch each of the wires from the fan to the hot (presuming they connect to either the light or the fan) to see which turns on, and then connect the wires to the Inovelli canopy accordingly.

Do the instructions show the wire connections for the canopy that came with the fan? They might shed some light on why you have an “extra” red wire.

I’m a bit confused because you mentioned having an extra red.

It’s the red wire coming from the switch junction box, it’s in the 14-3 romex

I drew a red line from the switch the black wire I attached it to. 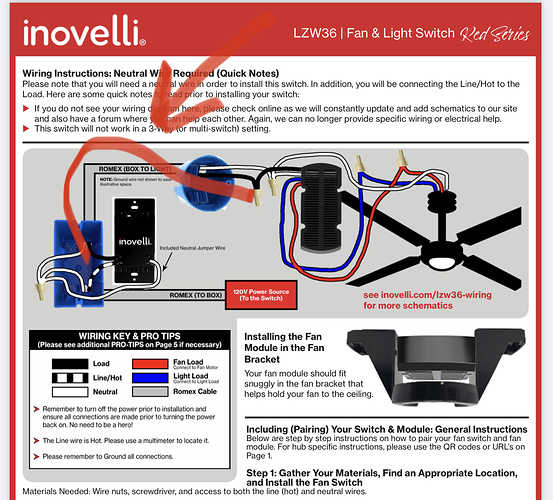 I’m going to open up here in the next hour and see, cause yeah something has to be wired up incorrectly I would think.

Thanks! I’ll let you know what I find out when I open it up.

It’s the red wire coming from the switch junction box,

Ok, I understand now. When you open the fan up, disconnect that red from the 14-3 and wire nut it off. It should be wire nutted and not connected to anything in the switch junction box either.

I suggest that you disconnect the red in the fan canopy so that you do not feed power back to the switch box via the red. It’s not needed. That’s not causing your problem, but it’s a safety thing.

Now the buttons work properly! … however…

The fan speeds seem to be off. (Not sure if I should create a different thread for this? Or if I can easily break this off as a new thread)

• High Setting - Spins High, as expected.
• Medium Setting - barely moves at all, not really feeling any air movement, almost not moving, but does move.
• Low Setting - Seems to be more like a medium speed, way faster than the actual Medium setting.

Can the speed adjustments be modified somehow?
Or does this represent a different issue?

Pull the chain to set it on high???

Can the speed adjustments be modified somehow?
Or does this represent a different issue?

Just a guess, but if setting the pull chain to high doesn’t resolve it, it’s possible the canopy module has failed. Popping sounds are never good in electricity, as they usually result from electricity arcing and/or components failing. It’s possible that when you powered it up the first time and heard the pop, voltage was introduced where it shouldn’t have been. Whether that is from mis-wiring or the device just failed is hard to say.

setting the pull chain to high

So if I pull the chain, the high is not as high, more like a medium speed that I’d expect. The weird thing is the middle speed it slower than the slow speed. When I get my Hubitat this week I’ll add it and take a look at the settings to see if there is a speed control in the configuration.