I can’t find the Button Mapping for this new device. I would assume it is something similar to the Red Series Dimmer but there are two controls switches on this new Fan/Light switch for both the Fan and Light so do both switch child devices have the full range of button mapping like the LZW31 Dimmer?

Check out:
Inovelli Toolbox
From there, the mappings are

I assumed incorrectly they were mapping the increase-decrease switches for both the light and fan thinking that was the logic they used in the LZW31 Dimmer switch.

The documentation says in the section about “Getting to Know Your Switches” that those dimmer switches could be used in a scene control with a single press? I wonder what button map is?

Thanks @bjcowles for the post and @nathanfiscus for putting together the excellent resource. Inovelli @Eric_Inovelli ought to reference that in their online documentation of all their switches.

I have smart bulbs in some of my fans so I also need this mapping to setup my automations.

Good grief this was so easy to figure out on your own. All I needed to do was do all the multiple taps on the buttons and go back and look at the Events tab for the Fan/Light switch. The Event detail makes it snap to see what Button number and Event is being seen for each unique multi-tap. This is why I love my Hubitat.

Thanks for your work on this. This is only missing both rockers. Maybe it was obvious to others but not to me:

I’m trying to understand the buttons. I have hue bulb in my fans. I just wanna use the rocker switch to turn lights up and down.
What do I need to do?

Hue bulbs seem to be a little overkill for what you are asking. Why not just use some basic dimmable LED bulbs instead of smart bulbs like the Hue? The “dumb” LED will dim just fine with the LZW36.

The rockers will mess with supply voltage to the HUE and potentially damage them. All smart bulbs like the Hue are designed to have full supply voltage at all times.

Relays are disabled.
I don’t understand why people can’t get over the fact that people want a smart switch and a hue bulb.

I don’t understand why people can’t get over the fact that people want a smart switch and a hue bulb.

Getting a little testy are we?

It really isn’t that difficult to understand from my perspective when you asked how to dim the bulbs using the buttons have the ability integrated. However,

how do you disable the relay for the light? 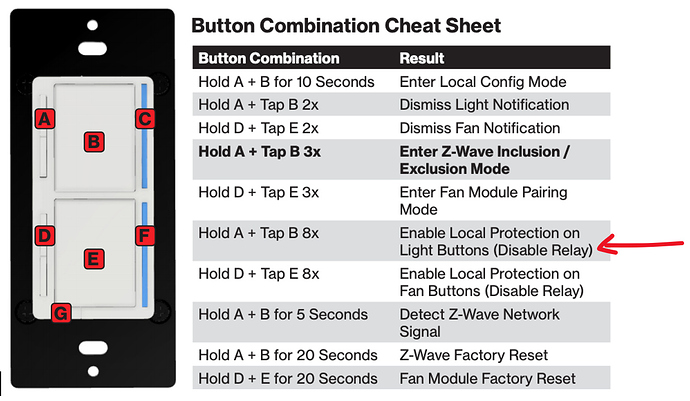 @Eric_Inovelli Can that also be controlled from the hub as with the other switches? Or is it a physical interaction only?

Can that also be controlled from the hub as with the other switches? Or is it a physical interaction only?

Someone correct me if I’m wrong, but when I try to do this from the hub (via Z-Wave local or remote protection sets and reports), it seems to be for the entire switch — both the fan and light components – rather than for just one. A Z-Wave report seems to show that local protection is enabled if I manually enable it via the 8x taps on either the light or fan buttons, with no distinction between whether I did it for one or both. My guess is that the Z-Wave commands for this don’t allow you to specify which “endpoint” this is coming from or destined towards, but that they were able to make it distinct if you do it on the device itself. (Someone, again, correct my Z-Wave assumptions if those are wrong — but it seems like either that or a problem with the way things are reported, which do not incldue an endpoint like many reports do.)

Remote/RF protection, which AFAIK is only settable from the hub, also seems to be for the entire device; I don’t believe any of their products have a way to physically enable or disable that. I’ve usually avoided setting this since it’s easy to avoid if you just don’t adjust the level or switch from the hub, and you normally have total control over if/when that happens (and in some devices this has unexpected consequences, like more than just on/off or level commands not working).