Either I am overthinking this and the answer is stupid simple, or fan is not compatible with switch.

There is no name on fan but i bought at Home Depot (catalog) 12 or so years ago, so it is probably Hampton Bay, but its a really nice fan that won’t be replaced.

No chainpulls…it has a remote with a receiver that took me hours to get to. One line and neutral goes into receiver. Coming out of receiver is blue (lights) and 3 wires red, pink and grey (18 ga?) that are the 3 speeds. I believe there are 2 coils that are 2 speeds and 3rd speed is the 2 coils together (common AC motor config), so I am guessing that i cannot just figure which wire is high speed and connect to that, but it is easier to ask here than tapping into wires and giving it a shot

I don’t see how red (fan) wire from module can logically connect, but thought I’d post before putting fan back together (it’s a project).

I think you’re going to need a new fan. I think the controller sends out different voltages on each different line to have motor ramp up/down speed.

Let me check with the manufacturer on this one - hang tight!

@mgreenb561 - for some reason your link isn’t working - can you update it? 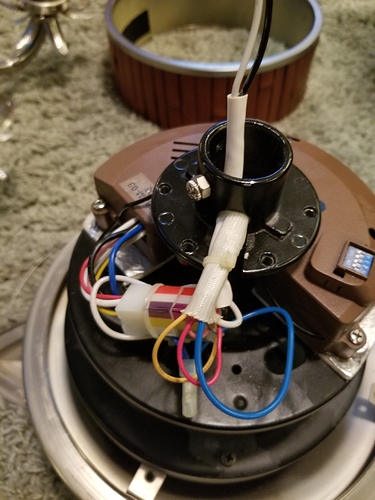 Where does the black/white wires connect to?

This fan is pewter / cherrywood; pineapple motif (I live near Pineapple Grove…its a Florida thing)… Im very attached to it. I have smart bulbs but wish i could control fan. Using the remote just seems so 20th century

Ok, so I just talked to the manufacturer and they said you could connect to any of the three wires (and leave the other two disconnected) – but if you know which one is the, “high” one, please use that one to be safe.

Is this your fan?

I looked around, and found a youtube video of someone who replaced their receiver with a fan dimmer. It looks like you would need to install your own starter capacitor if you decide to go this route, and you will not be able to change the fan direction without re-wiring.

That s my fan and that appears to be the trick setup! Thanks so much

Looks like I have the same issue but this is for a brand new fan that my wife bought. The Monte Carlo fan (http://www.montecarlofans.com/InstructionSheets/3MAVR60XX-CUL-ENG.pdf) came with a receiver and remote that has Red/Brown/Purple coming out for the fan connections to matching colors on the fan. I tried using a multi-meter and get similar voltage readings from all the wires no matter how I try and hook up the leads. So not sure I’m going to be able to use this new LZW36 switch/receiver kit I pre-ordered and was excited to try. Open to ideas, but don’t want to try adding capacitors, etc. to it. Otherwise I’m going to have to sell my unused LZW36 as I have no other use for it in my house

and buying a new fan isn’t an option unfortunately.

The link above shows the connection instructions and the receiver. Thanks in advance for any help.

It looks like you have a fan with no light?

Anyway, with that aside, putting in a capacitor is nothing. There is no soldering or anything like that. It is a small enclosed plastic casing with 2 wires that you connect inline with wire nuts. You can buy one on ebay for $5 or $6. They have no polarity…you can’t screw it up.

Other than that, your red/brown purple is probably (but i dont know for sure) the same wiring as mine but with different color code. I tried googling this as jtronicus probably did for me but was unsuccessful.

Maybe someone has this info. Eric indicated just to take the ‘high speed’ …that will take some testing on your part to test to see which wire is high but the link jtronicus sent me is much more specific (with a youtube video to show it works)

There was one sentence in that instruction sheet that worried me (2nd page from the end)…
The receiver provides the following protective functions
Lock protection- The DC motor has a build-in safety feature against
blade or motor obstruction during operation.

“DC motor” - I think the LZW36 is for AC motors only?
(Though that bit of the instructions could have been copied from something else & not apply here)

Don’t these fans remember the last setting used by the remote? So if you kill power to the fan from a regular switch it will return to the last state when turned back on?

Also, nearly every fan I’ve ever installed with a light kit has an easy way to wire a separate switch to it.

If so shouldn’t the Inovelli fan control just work from the main power leg going into the fan? I don’t see why there should be a need to tap into the fan’s internal speed circuitry unless you’ve purchased a weird fan that isn’t designed to have a wall switch at all.

Also, nearly every fan I’ve ever installed with a light kit has an easy way to wire a separate switch to it.

Many of the newer high-end fans are not designed to have a wall switch, and have built-in transceivers with temperature monitoring or the ability to reverse the fan direction with the remote. These fans are not intended to have the transceiver removed.

You are correct, we went with a Fan with no light, because I wired up some LED recessed lights in the room pulling power from the fan location which is why I was so excited for this new Switch. I was thinking that one of the 3 wires would be common and the other two would be used for the direction of the fan only giving power to one at a time depending on which way it was turning. But after connecting a multi-meter to it, I get power readings from any combination of two wires so there goes that theory. Let me know how your efforts go. Thanks

I agree with your statement in response to @DataMeister. My fan does remember the last setting (speed/direction) when power is removed and comes back. But the settings and the direction are all done in the remote to the transceiver and I’m unable to make sense of the 3 wires and how they actually tell the fan what to do since I get power readings from a mulit-meter from all of them when it’s running.

@SandyB you found the answer that I missed. I called product support after reviewing the “DC Motor” comment and they informed me that it is a DC motor for the fan and does require their transceiver for converting power, setting speed and direction. It will remember the last setting so I can use any Inovelli switch to turn power on/off to the fan and it will resume last state. My only option (without opening up walls/ceiling to run another power feed) may be to put the LZW36 receiver in a wiring box in the ceiling above the fan and have it connect to the fan transceiver so I can try and get to my end goal which was use a single power feed to provide power for both Fan and the LED recessed lights I recently installed that all run back to the Fan location. Thanks SandyB

It’ll be interesting to see what happens when you feed less that 110V to the fan controller (so with the LZW set to low or med). At a guess there will be voltage regulators in their transceiver, so the input voltage will make no difference. Or just maybe, the fan speed will be proportional to the input voltage & it will work perfectly!

I was going to use the capacitor in my existing controller, but decided not to rip it apart, because if this doesn’t work, i want to reinstall that controller. I have ordered a capacitor that hopefully will arrive today or tomorrow.

The advice you got differs from the advice I got…I may be above my pay grade, but I’m gonna give it a shot anyway. Also want to check whether I have an AC or DC motor. Will keep you posted

Follow-up. Taken awhile. Had to get up to speed on firmware update and had some personal distractions, but the wiring is correct. Light works perfectly. The fan has only high and low from the switch, but Alexa will take it to whatever percentage I want (I am almost always happy on low anyway). I have not gone back to device handler, but I will …I want to play with breeze mode.