the line is the dark black wire I believe the load is the mustard yellow one because when I turn the light on it has power to it and when I turn the light off no power, the top wire the grey one Connects to the dimmer switch next to it and the uncovered copper grounds from both boxes is this a traveler and a ground? Where am I going wrong here… not sure what wire goes to what all I know is the line wire which I tested with a pen tester that shows it hot 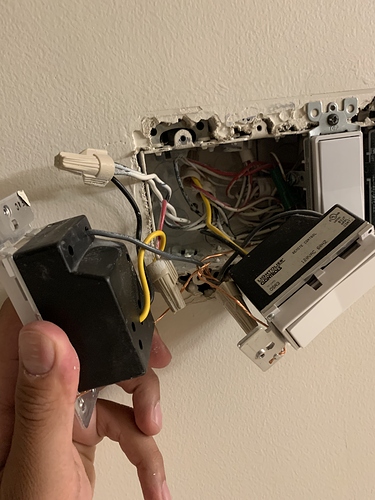 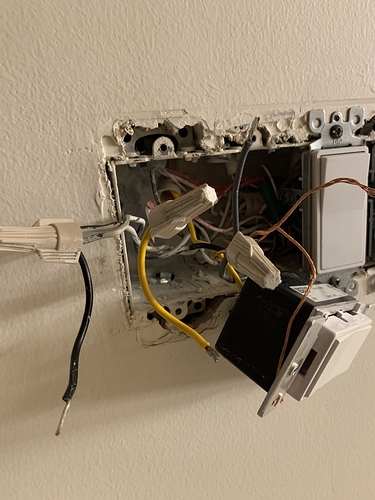 Can we get pictures of the device itself? The Unit to the right is a Remote unit with Onset devices (AUX switch). We can look at the manual of the devices and figure out which color code is what, but it may be gray is the ground? We really need better photos of the wires coming in the box too.

Plus pics of the other box and switch as well. 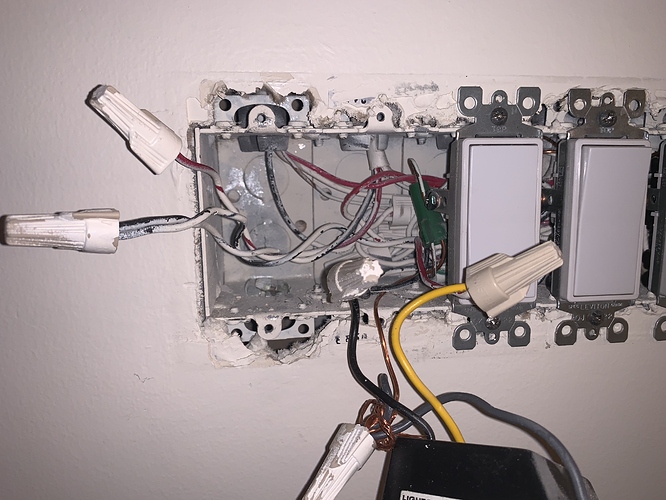 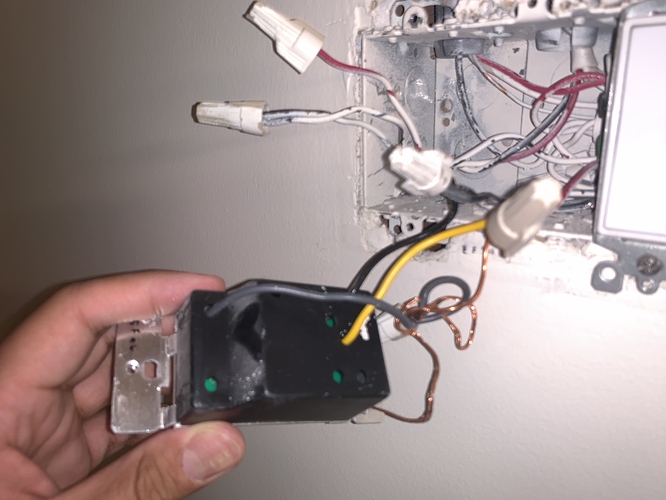 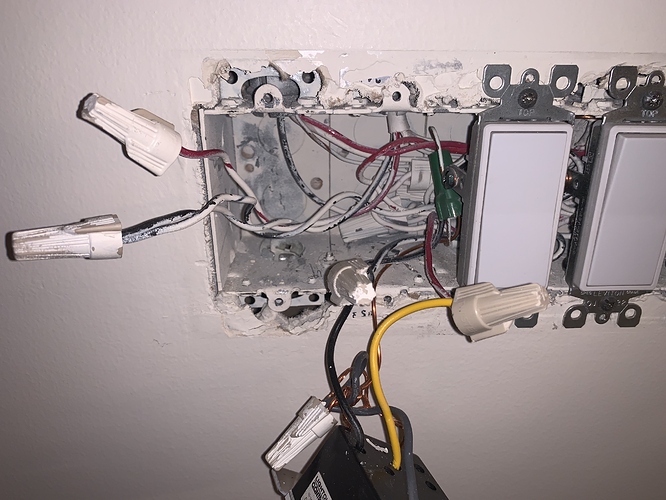 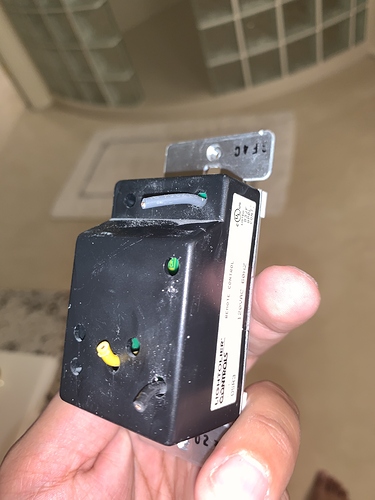 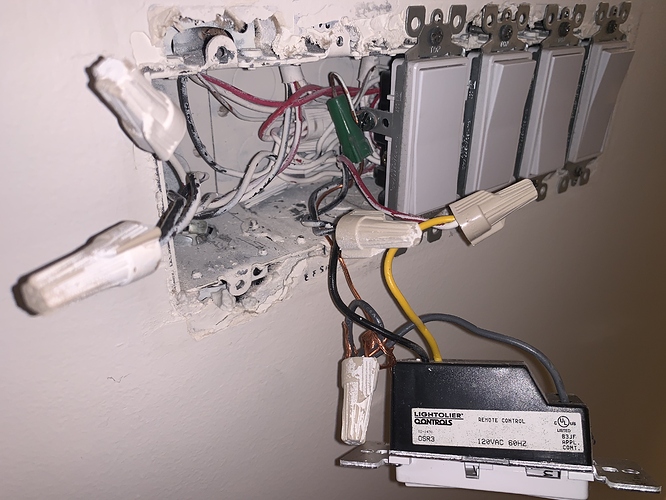 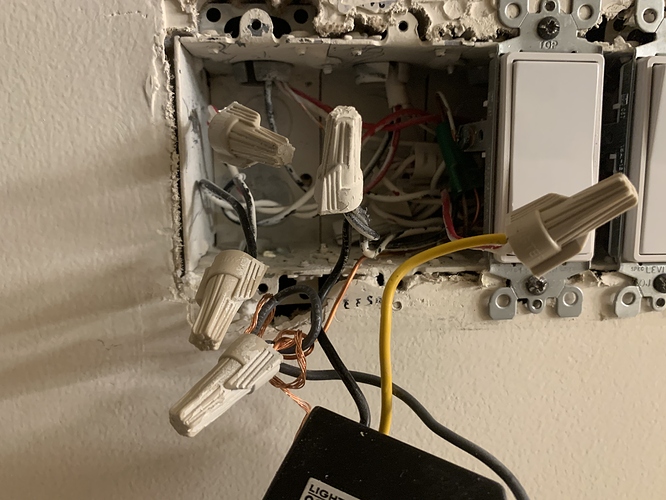 Can you identify which side is the Line/load box? I think we need to find the line first and decide if it’s a line/load same box, line/load different box, or line goes to light first then down to the boxes. That’s the best way for me to start. @Bry has other great ways to help identify these. Are you only replacing the switch on the left? The 2nd switch from the left is staying or going?

I’m removing both switches both are dimmer switches

The line is the black wire

@Bry has other great ways to help identify these.

Thanks for posting the extra pictures, but at this point it’s just a mess of pictures. I THINK you posted pictures of the other box, but I can’t tell for sure. Plus what I THINK is the other box has two switches removed from the box so I’m not sure in which slot or with which cables are involved with this switch.

So . . I’ll get you started in another way. The existing switches, based upon a label in the first pics posted, are Lightolier Onsets. They were discontinued in 2013 but the manuals are still available.

The Lightoliers work with a main dimmer and a remote unit, sort of like an Inovelli and an aux. Looking at the wiring schematics for the Lightolier, it appears they need a line and load in the same box, with a hot and a traveler to the remote switch.

I’m not sure which exact model dimmer you have, but believe their wiring configuration will be about the same. I’d suggest you figure out your wiring from analyzing the connections to the main dimmer.

So as far as I can tell, you’re starting in the wrong box, which is why you thought you had a non-neutral. The Inovelli goes in the box where the main Lightolier dimmer is, and an Aux goes where the Lightolier remote dimmer is.

That’s about the best I can do at this point, as TBH, it’s impossible to determine more from your pictures without same labeling and identification. No guarantees I’m accurate, but this is my best guess based on what I’m seeing.

Thank you for your detailed reply sorry about the over abundance of pictures.

From what I understand the pictures of the switches I sent you, you are suggesting those two switches are slave switches I need to connect the innovelli to the master?

No need for an apology, more pics are better. It’s just a bit hard at this point to tell the two boxes apart.

In your FIRST post there are two pictures. If you look at the one with the label on the dimmer it says OSR3, which is a remote. But it is not clear if you are replacing that one or the one in your hand that we can’t see the label. If that one says OSR3, that is a remote too. So as far as I can tell, the Aux switch goes were the OSR3 remote is and the Inovelli in the other box.

In your 2nd set of pictures you posted a dimmer with the leads cut off that came from I don’t know where. That is an OSR3 remote as well, so wherever that came from, the Inovelli doesn’t go there.

So yes, you need to find the Master Lightolier and put the Inovelli there. Based on what I think the wiring is for a Lightolier, I described how to determine the conductors in the box in my previous post.

Okay so here is where I am at…

Ignore all those pictures above… I closed that box back up and went to the other side of the room to find the master switches. I want to replace the two Lightolier 600 switches.

This is a 5 gang box but I only want to replace the two dimmers on the left with two Innovelli black dimmers.

Each lightolier has has 4 wires

How do I wire my innovelli switch to this configuration? 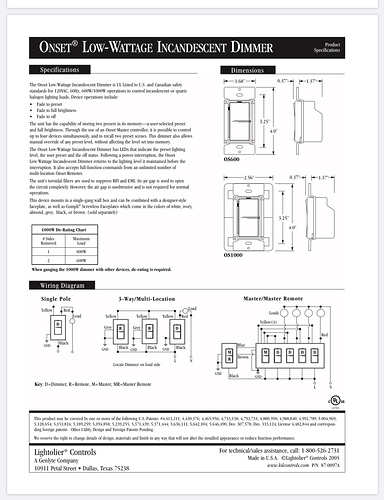 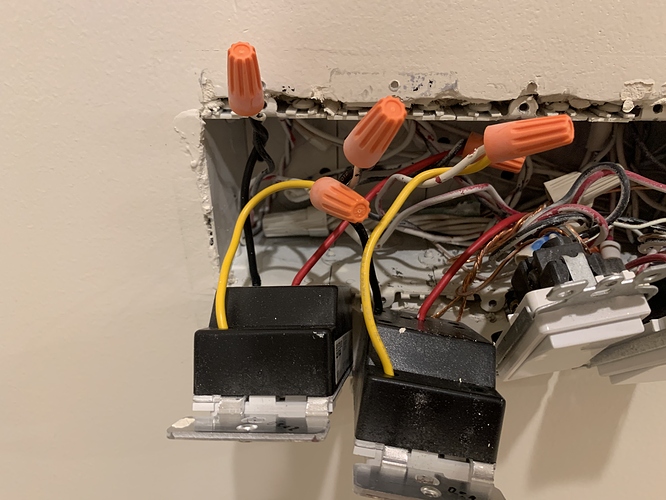 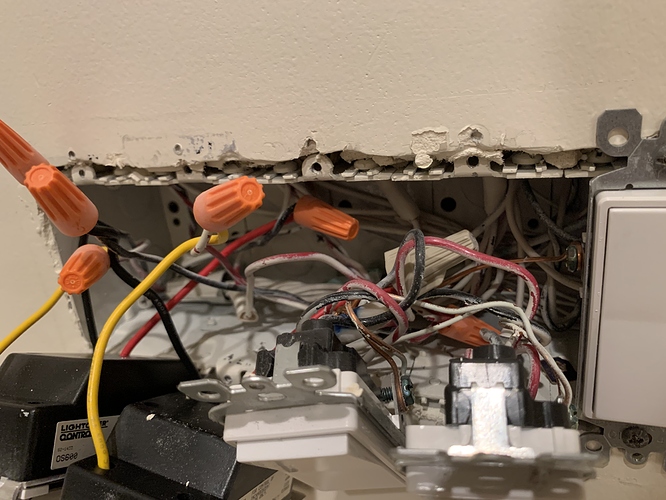 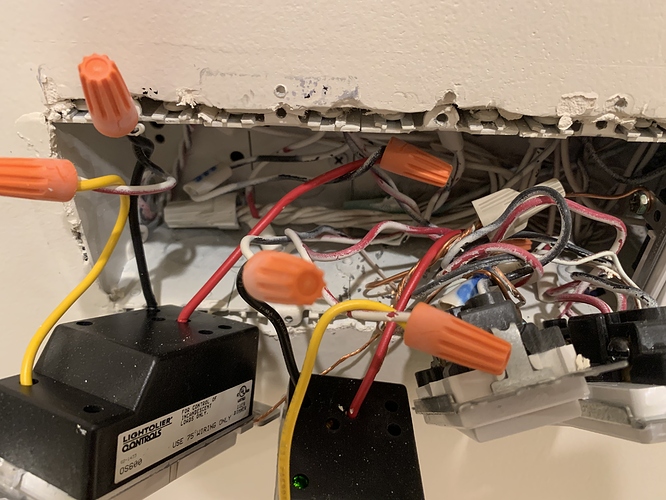 I can’t see enough of your box to tell the 2-wires from the 3-wires. I’d consult with an electrician for assistance.

Using the description I posted before, you can map the switch connections to the 2 and 3-wire conductors. I can’t even tell if you have a 2-wire or 3-wire going to the other box, so I’d plan on putting an Aux there. For example, the black should be connected to the Line, the yellow to a traveler and the red to the Load. At least based upon the switch diagram, the other traveler needs to send a neutral to the other box for the Aux.

It’s hasn’t been tested. It may work. It may not.