I’m looking to install a LZW31 as just a remote for another smart device. I have an older home with no neutral wiring in the location for the switch and I’m using a SmartThings hub. I just want to use it to send an on/off signal to a smart plug across the room, so this is also a no-load install situation. Is this possible?
I’m installing the switch in a switch box that previously had a dumb switch controlling a different outlet, but I connected that line and load to keep the outlet always on.

Glad to see such an active community on here! I have a red series dimmer installed and working alright in another room. Thanks in advance!

@mike_u - With no neutral, you’ll need to utilize the load to expend the power (return voltage). That’s how non-neutral setups work. It utilizes the load to bleed off the excess power.

@harjms got it. So my only solution here is to use the load for the wired outlet (instead of bypassing it to remain always on), and use SmartThings to still have the switch control the smart plug as well? This will effectively pair the states of the wired outlet and the separate smart plug.
I suppose the other option would be to run a neutral wire separately, but I’ve already tried this and access is not great.

@mike_u - Yes I believe so. Is the switch getting power from the outlet (thus looping back to the outlet)? If so, you could have the bottom outlet always powered and upper be part of the dimmer. Note, dimmers should not control outlets. I would fully raise dimmer to 99% and “disable local relay” from the dimmer. This will prevent anyone from lowering voltage. Then use your scenes to control your smart bulb as planned. Just don’t run a vacuum cleaner or large load off the outlet controlled by the dimmer.

It sounds like you are suggesting using the line from the unrelated receptacle that you wired in the switch box to bypass the switch as the power source for the Inovelli. The problem is that since you don’t have a neutral there, you would have to use a dimmer in a non-neutral configuration. That requires a load, which you wouldn’t have.

Thanks for your input @harjms and @Bry . Correct that I’m just trying to control a smart plug, not the receptacle itself, just with a plug made by Kasa.
I just purchased a Red Series on/off switch, agree that the dimmer is not the best way to go here. I had the dimmer left over from another project so I was trying to make it work, but I’d rather have it work correctly/safely.
I’m planning on just using the Black switch to control the (dumb) receptacle since there’s no way to get it to control a smart device without a neutral and without a load. I think I can still send a signal to the smart plug if desired in addition to controlling the receptacle, too. Correct me if I’m wrong.
Thanks for the help!

I think the issue is that you have no way of powering the switch. What wires do you have in the box where the switch is? Is it just a single wire with two conductors plus maybe a ground?

@Bry I have old romex wiring with no neutral, so I just have, I guess, a line from my panel and a load to the receptacle?
I just learned that the red series on/off switches I ordered don’t work in a non-neutral configuration, so I think I need to give up on this or run a neutral up from the basement. Officially frustrated.

If you have more than one Romex in your switch box, then that’s another story. If you do, post pics.

From what you describe, yours is like this (substitute your receptacle for the light): 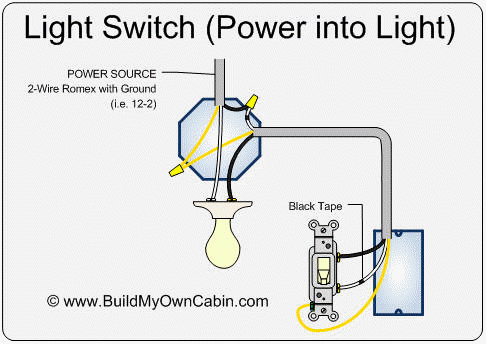 You are correct that the switches need a neutral and won’t work in this situation.