Never even saw it coming…

Turned my beautiful Acura from this: 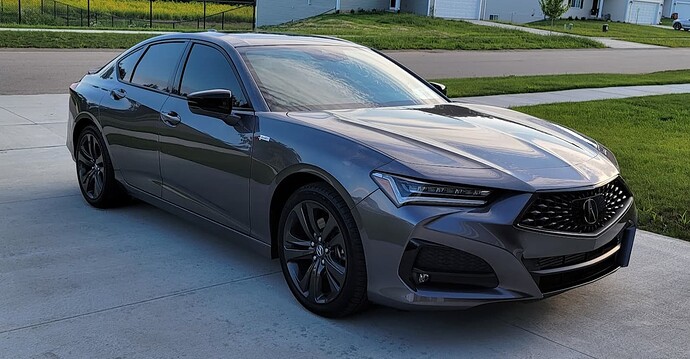 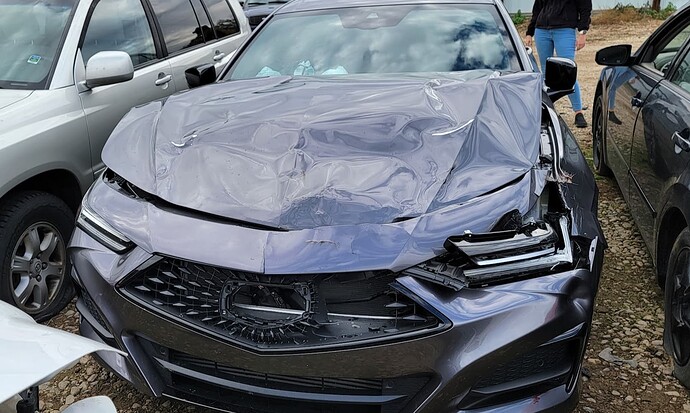 In less than a second.

I do want to give a shoutout to AcuraLink (their version of OnStar) – they literally were on the speaker with me seconds after the collision and made sure everyone was ok and fire/police were there. They even called a tow-truck. Really nice work.

Also shout-out to the lady who kept shouting across the road and pointing out what a huge deer it was when I was trying to talk to AcuraLink lol.

RIP Acura TLX… it was a good two months lol.

So, be careful out there – I know there’s oftentimes not much you can do, but it’s definitely a good reminder to keep a look out.

On a positive note – I am in the market for a new car lol!

Strongly debating between another TLX (the last one was my third and I absolutely love Acura) and a Tesla Model 3.

I know they’re in different leagues, but my friend has been pushing Tesla for a while and just got one himself and he says he’ll never go back to a traditional car.

I’d say I’m at 70/30 in favor of another Acura, but curious what everyone else thinks!

I guess I could just choose a favorite daughter for the night and leave the rest at home!

You can’t catch a break!! Seriously buy a lottery ticket because I feel karma owes you big after the year(s) you’ve had!

My daily driver is a BMW i3 battery EV. I have never sat in a Tesla, but have heard plenty of complaints about poor fit/finish and a “cheap” feeling in the cabin.

With that said, did your insurance company REALLY total the car for the above damage? With the chip shortage and auto manufacturers having delivery issues, I’d be surprised if they totaled the car for that damage.

Isn’t it just muzzle loader season up there now?

You can’t catch a break!! Seriously buy a lottery ticket because I feel karma owes you big after the year(s) you’ve had!

Lol, I’m thinking about it! Makes for a good book at the end of the day at least

My daily driver is a BMW i3 battery EV. I have never sat in a Tesla, but have heard plenty of complaints about poor fit/finish and a “cheap” feeling in the cabin.

Yeah, that’s the one thing that I was noticing on the Tesla’s – I’ve only gone off pictures, but it does seem rather “cheap” feeling. I’m glad you said something bc I wasn’t sure as I’ve never driven one.

I love the interior of the Acura – it just feels luxury and sporty at the same time.

I’ll check out Audi/BMW – likely out of my price-range, but we’ll see! I test drove an A6 15 years ago and I still remember how amazing it felt. I think I went around a corner going 60 and didn’t even realize it.

With that said, did your insurance company REALLY total the car for the above damage? With the chip shortage and auto manufacturers having delivery issues, I’d be surprised if they totaled the car for that damage.

I’m definitely still waiting on the insurance claim person to take a look, but when I talked to them on the phone, he said, “based on what you told me (airbags deployed, front-end damage, etc), my computer is saying it’s a total loss”.

Isn’t it just muzzle loader season up there now?

Ha, probably – I know there’s actually a pretty bad problem with the deer population around here.

I’ll check out Audi/BMW – likely out of my price-range, but we’ll see! I test drove an A6 15 years ago and I still remember how amazing it felt. I think I went around a corner going 60 and didn’t even realize it.

Should’ve went with the RS7. My Q5 TDI is still in the shop.

I’m too tall for the sportback.

I always test if I can fit in the back seat.

The torque and smoothness of a Tesla is for sure something to experience. I would definitely recommend a test drive if you can, and agree with your buddy that I wouldn’t even consider going back to an ICE car. Over the air updates keep improving things as well, so my 3 year old Model 3 continues to improve. No complaints on the fit or finish, it’s more of a minimalist approach and I suppose isn’t quite as luxurious feeling in some regards as other cars in it’s price range, but the battery is what makes the car get up there in price.

Been there. For us it was in a Dodge Dakota at roughly 60 mph. So grateful that we were in a tall vehicle. Not surprised it’s looking like a write off. Glad that everyone is OK!

+1 on looking at other EV options.

There are lots of good electric vehicles out there made by car companies. The model 3 is a car made by a tech company. It doesn’t mean they don’t build a good car, but they do it differently than the others. They do well in places where others fall short (over the air updates, intuitive software), and fall short in areas where others do well (“basic” stuff about how to build a good car at scale, like using automotive-grade components and overall build quality).

It’s up to you to decide if you like that or not. If you do, get a Tesla. If you don’t, then test drive some other EVs. I will never buy another ICE car. EVs are just a better product.

As we discussed @Eric_Inovelli - EV would be great, but remember to look at charging options. I would not own an EV without a L2 charger in the garage (or ability to put one in). I believe the L1 chargers rate anywhere between 2-4 miles of charge an hour. Nothing like charging a vehicle up for 12 hours just to get 25 miles of charge.

Nothing like charging a vehicle up for 12 hours just to get 25 miles of charge.

My BMW i3 will charge 50+ miles overnight on the factory-provided 120V L1 charging cable. Having a 21 mile round-trip commute, I plug it in every other evening when I get home and it is fully charged for the next morning. Just like a smartphone, only bigger.

We also have a 240V L2 charger (OpenEVSE kit) on our detached garage, which my wife uses for her Kia Niro EV. She was commuting 100 miles per day before COVID, so she also charges every other night but needs the extra power of 240V L2 to finish in time. We could alternate charging evenings and share the L2 charger, but I am of the belief that using the slowest charger that meets my needs will save on battery degradation over the long haul.

If I take my Cummins diesel pickup on my 21 mile round-trip commute, it gets 20 MPG so figure a gallon of diesel fuel. If I take my 4-cylinder turbo weekend car, it gets 21 MPG so figure a gallon of super unleaded because turbo. The i3 uses 52 cents of electricity on the same drive…and doesn’t need oil changes or any other scheduled maintenance beyond 2-year brake fluid flushes. My wife’s commute went down from about $20/day with her former gas vehicle down to $3.20/day in electricity. Throw in the $7,500 federal tax refund for purchasing any EV but a Tesla, and driving electric becomes a no-brainer…

@vreihen - That’s great BMW has a pretty decent charger for sure. Tesla states “A 120 volt outlet will supply 2 to 3 miles of range per hour charged. If you charge overnight and drive less than 30 to 40 miles per day, this option should meet your typical charging needs.”(Charging Your Tesla | Tesla); so not too far off from my 25 miles of charge for a 12 hour charge.

The L2 charge is, in my opinion, the only valuable way to go EV. My round trip commute is 70 miles a day to/from work. I wouldn’t be able to offset the charge with a L1 charger. My TDI SUV (not deleted) gets about 30 mpg. I’d probably save money in the long run, but add up the expense of an equitable car (not a bolt), L2 charger, sub panel install, permit, L2 charger install; I can fill my tank up for a while…

Check out the Infiniti Q50 Red Sport 400. It’s on my list along with that Acura and after driving the Red Sport I was underwhelmed with the Acura power.

Also S5 and S6 are on my list but will have to keep saving (we have owned all of our cars outright, won’t do a payment).

The Model 3 performance kicked all of their asses in the fast as f*** department though.

Update: The insurance guy went to inspect it and is under the belief the car isn’t totaled. There’s about $18k worth of damage he can see and the car needs $33k to be declared a total loss. I’m going to guess the body shop won’t be able to find $15k worth of damage, so the Acura may live to see another day. I should know more this week!

It is interesting to see the different opinions in this thread and it’s pretty cool to see a lot of the EV’s mentioned. To be honest, I’ve always wanted a Tesla and I’ve admired Elon (I know… controversial) and what he’s been able to accomplish, I just never took a serious look at them because I was way too nervous to run out of battery and be stranded on the road in the middle of nowhere (which, there are many of these backwoods places in MI). But, the more I looked into it, the more it seems like Tesla (and the other companies) have created a network that makes it pretty hard to run out of battery.

It’s on my list along with that Acura and after driving the Red Sport I was underwhelmed with the Acura power.

The Model 3 performance kicked all of their asses in the fast as f*** department though.

Yeah, I still can’t believe the specs on that bad boy… holy crap.

Correct. The Acura was quick (no question), but the 40+ pulls in the infiniti were surprisingly moreso, and the handling was tighter and more “sporty”. The Acura had a better steering feel though.

That or the RS5 sportback :druel: (kidding).

Tesla knew that something was needed to make press noise so they made sure the drivetrain was capable of fast 0-60 times (with above 60 not mattering) and they stuffed the whole underside full of batteries to also be able to claim the longest range. The batteries gave the traction to get the acceleration.