I recently purchased 8 Inovelli LN-31-SW switches and am very happy with the feature set and quality of the hardware. I live in an apartment built in the 1960’s and there is no neutral wire.

I’ve been able to integrate the dimmers with standard LED bulbs in ceiling fixtures easily after installing Aeotec bypasses. However I’ve struggled to integrate the dimmers with smart bulbs in a single pole setup. I’ve tried Philips Hue (w/ hub), LIFX, and Inovelli’s Ilumin own bulbs. Even with a bypass installed, some of the light fixtures will sometimes turn off. This causes the smart bulbs to go offline.

Because these are smart bulbs, I don’t actually need the switch to control the load. What I’d like to do instead, is use the dimmers as a simple scene controller. I thought that if I wirenutted the line and load wires together, I could pigtail to the Line terminal of the switch, and keep both the lights and the switch powered on at all times. However, while the lights are indeed always powered on, it doesn’t seem that the switch is getting any power.

How can I do this? Thanks in advance!

Best way to do this is wire the switch normally. Turn the switch on to full load and disable local control. Then use scene control. The switch needs the load connected because that is how power is drained through. Power requires an “in” and an “out”. The current way you have it wired has no out.

there is no neutral wire

I think you may have mixed up “Neutral” and “Safety Ground”. Your system has a Neutral, however as in newer systems it is possible the Neutral isn’t in the box you wish to put the dimmer in (this would be the case of a switch wired to a light where power enters at the light.

In any case it is likely the wire can be changed to provide a neutral where you want the Inovelli.

Can you post a quick sketch of you current wiring?

Thanks! Controlling via scenes and disabling local control is where I started but unfortunately I was not able to get it to work in a consistent manner. When I turned off the smart lights or dimmed them really low, the switch would go offline after a period of time – sometimes a few seconds, sometimes a few hours. When the happened, the lights would get no power and become unreachable as well. I would need to pull the air gap and push it back in, which would cause the lights to come back on at full brightness and the switch to come back alive.

I first suspected there was not enough power to drive the switch, and so I installed an Aeotec bypass. Things improved substantially but the switch still went offline about once every day or two. That obviously got tiring pretty quickly, so instead I’m trying to find a way to keep both the switch and the lights on powered at all times.

Thanks John! I probably have my terminology mixed up.

There were two wires in the box when I replaced the existing dumb switch, a line wire that always had power, and a load wire that only had power when the switch was on. I tested these with a simple non contact voltage tester.

The wiring basically looked like this, except there was no ground wire. This is an older apartment and I suspect the grounding is provided via the metal electrical box itself. 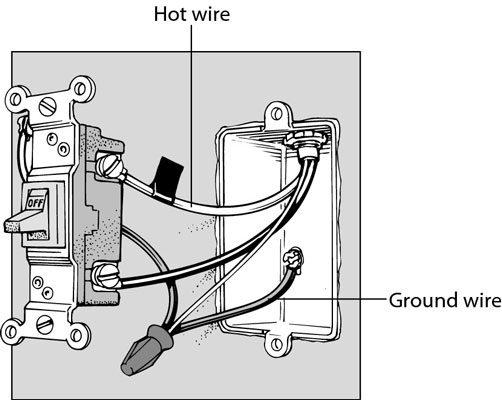 I suspect the grounding is provided via the metal electrical box itself.

Yep, there are a couple ways to ground without a ground wire. This often depends on local code. When conduit is used, the conduit itself is the ground. If BX (metal armored) cable is used, then the metal jacket is the ground. Both are physically connected to a metal box. In both cases, the switch gets its ground when it’s mounted to the box.

If you look inside the box where the wires come in, you can see the type of cable being used.

In your case you have no neutral because it stops at the light and only the hot is switched.