I setup soon rooms with red series dimmers and switches. I setup double tap scene with st. When I double tap I see in log quickly but other devices take 5-20 seconds to react and do so at different times. I relocated hub close to switch. Any suggestions? Thanks.

What “other devices” and if you see the log taking that long I’d perform a z-wave repair to optimize the mesh, then contact [email protected] if the issue remains.

Thanks for the reply. I have about 30 devices on the network. Most work well. I added 10 red series dimmers and switches. Two of those dimmers have consistent connectivity problems to Samsung v3 hub. Delays of 20 secs to a couple minutes. As you suggested a ran the z-wave repair a couple of times. I tried to exclude and re-add the problem dimmers. One while had zwave signal (green light after 5 secs) just would not exclude. I have 90 more switches to convert and nervous given network reliability. Any suggestions appreciated.

Hmm. One thing Z-Wave is sensitive to is missing nodes- if you remove a device or factory reset it without unpairing it from the network, that can cause issues as the network still thinks it’s there. Do you see any Z-Wave nodes in Samsung that you know have been removed?

Another thing- Samsung’s device handlers for Inovelli are cloud based. That means for a scene control command to take effect it has to go up to the cloud and back, which can take a few seconds. A non cloud based hub can be better in this regard (HomeAssistant, Hubitat, HomeSeer, Universal Devices ISY, etc).

I have done a bit of investigating. I now have 50 inovelli switches and 20 other devices on SmartThings hub. I ran repair and always get failures but randomly different devices. Always inovelli and never other devices. I have zwave toolbox and same thing happens when I test network. About 20% of Inovelli switches fail when I run but not always same devices. Love switches. Easy to install. Great features. But unstable network an issue. Any thoughts?

We can get this fixed!

I’ve had issues with ST taking a while to figure out what is going on with about half of your device count, so it might just take a few runs to figure it out.

Building on this advice, @ericcwolfe, can you make sure all the model, device, and other Raw Data is filled in (ie: not 0’s)? 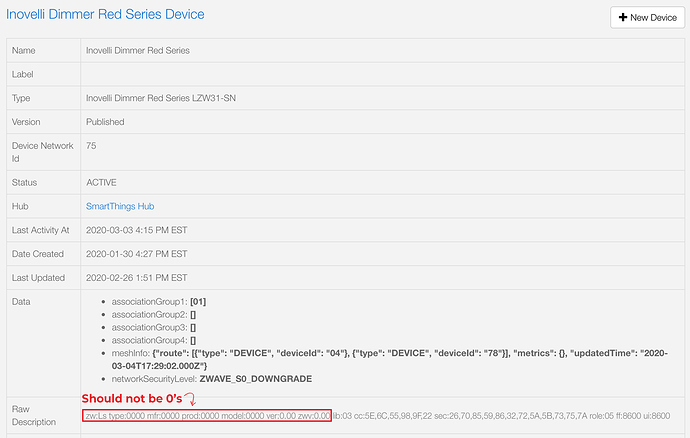 I have an older version of dth for dimmer from July and August for switches. All devices using either LZW31 or LZW30 device handler. How do I update to the newest code?

Eric - all devices have numbers and no zeros.

Hey @ericcwolfe if you go into the IDE and then “Device Handlers” tab, the handler should be populated in there. If you go into the code you can just replace it 100% with the raw github code I linked to above.

You can also have it check the github/compare for future updates if you want, but that’s a bit more steps.

Let me know if you need screenshots.

I ran Zwave repair twice. This is second log. Thanks for the help. 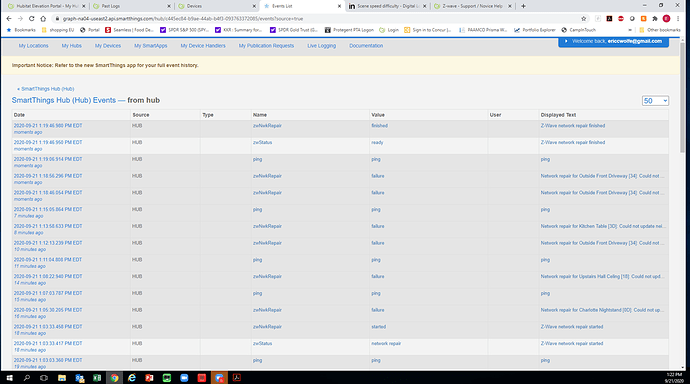 Wow that’s definitely not pretty. I’d recommend air-gapping each switch that failed for 30 seconds then reconnecting, giving it a few secs, then running it again.

That’s more than I’ve seen typically unless they have lost power.

And you are saying that the other times it is different devices?

I air-gapped and ran again. Still have 5 switching failing. 2 of the 5 switches failed last time and this time and 3 new failures on this repair. Please advise.

I definitely understand running this 20 times is painful, wondering what could possibly be up besides a failed device (in mesh, not physically failing).

No common devices among all 5 of them in the routes. 2 devices both have 1 device in common in the route but that device has not failed in repair.

This is a good thread on this issue: https://community.smartthings.com/t/faq-zwave-repair-not-working-how-to-fix-error-messages/18400

Depending on how many customizations you have, it might be worth excluding/including the devices until you get a clean run, but I know that’s a pretty painful process for 50 devices.

Sounds like more of a ST thing if the devices are jumping around, not Inovelli, however I’ll keep up with it here and see what more input I can think of.