With some experimenting I found that button 1 = down and button 2 = up. The button option in automations called “Pressed 2 times” does not appear to work. However, “double pressed” does work.

Hi guys, is the nzw30 series supported for this driver?

is the nzw30 series supported for this driver?

No. Presently there are just beta drivers with partial functionality for the LZW30 and 31 series.

Yes, they’re supported by edge drivers.
I have NZW31S on edge driver, created by Mariano. Invite can be found on SmartThings community

New Edge Driver for Inovelli Gen1 Dimmers (NZW31) At the request of @milandjurovic71, I have added the 5 Inovelli Gen1 dimmers, which are in the DTH inovelli-dimmer-nzw31-w-scene.groovy, since so far inovelli has only converted some newer models to...

Everything should be supported except for associations (still working on that).

hi, I understand the bulbs are supported by the smartthings’ standard edge drivers, aren’t they? I tried excluding them, factory resetting them and then adding them again but they’re still running on the device handler instead of the edge drivers . am I missing something?

I understand the bulbs are supported by the smartthings’ standard edge drivers, aren’t they?

@tangelogee was able to include his with the Edge Driver after removing the DH. I’ll link his post below.

The common understanding is that the Github Production fork is the one that directs which Edge drives are loaded upon adding the device to the hub. If you look at the Production branch for the Edge drivers in Github, there is not a Zwave Bulb directory as there is in the Main Branch. So it seems that ST has not yet decided to incorporate the Zwave bulbs into the Edge rollout.

That being said, there is a Zwave-bulb directory in the Beta branch and the Ilumin bulbs are listed there. I’m not sure, but I think these drivers are available to users that signed up for the ST Edge Beta program. So based on my limited understanding of this implementation, you’d have to be a member of the ST Beta program to get those drivers to load. @tangelogee may be able to shed more light on this.

AFAIK, Inovelli has not released their own beta for the bulbs . . . only the switches.

Sorry for the delay in responding; life came up :-/ So I was finally able to add the bulb using Edge Drivers. Apparently for some reason SmartThings was prioritizing the Groovy DTH over the Edge drivers. I ended up removing the DTHs for the LZW42 (and a few other DTHs I had added but didn’t need, like NZW39 and LZW41, as SmartThings decided to try those too…) It’s weird, because the Red series dimmers I moved over just added via the Edge driver even though the DTH was still there. Now the only…

Contribute to SmartThingsCommunity/SmartThingsEdgeDrivers development by creating an account on GitHub.

They do use the SmartThings Edge drivers, but you need to remove the DTHs for the bulbs and some other devices from your account at https://graph.api.smartthings.com/

Here’s a screenshot of all of the DTHs I’ve removed before the bulb used the Edge drivers. 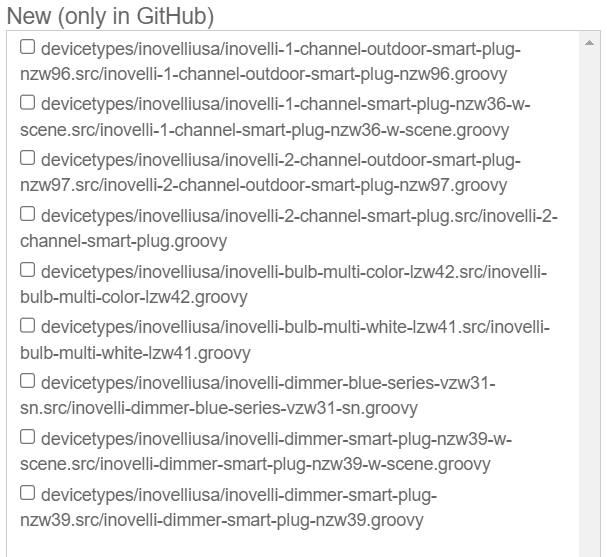 Once I removed them, the bulb installed using the ST Edge drivers. I’m not sure why the NZW DTHs needed to be removed, but they did. I haven’t added the blue series DTH to my account yet, so that one shouldn’t matter.

Hello, I am new to the Edge driver update and I have Smartthings v3 hub running Inovelli LZW30 / LZW31 switches currently. Can you please point me to instructions with all steps to update to Edge drivers? Thanks!

We have had some beta Edge drivers available for a few of our devices for a while now, but I’m working on releasing official, full featured versions for our Gen 2 devices. They are mostly done for our red & black dimmer and switch, and should be released soon. Right now we have the LZW30-SN available for anyone that is wanting to test it. The other devices will be added to this channel as well. Here is the Invite link: https://bestow-regional.api.smartthings.com/invite/qyMZ8Pwq1Zlm The driver …

SmartThings. Add a little smartness to your things.

Hello and thanks. That link took me a page that knows my hub location (street name) and had links to install the red and black series. But no clue where it installed them. I was logged into Groovy at same time so I think that’s how it knew me.

But is there something I need to do first at the Samsung end as far as getting off Groovy? I saw videos on this but not clear. If you know a list of steps for Smartthings v3 hub, please let me know. Thanks.

So at this point, if you want to covert your Inovellis over to Edge, you are going to have to remove the switch from the hub, remove the DH from the IDE and then re-add the switch. It should pick up the Edge driver during the re-add.

Once you’ve added, open the device’s page in the app, and select Driver from the 3-dot menu at the top right. You may see both the stock Edge driver and the Inovelli-made one and you can choose between them.

If you don’t want to go through the trouble of removing and re-adding, I would just wait for ST to do their automatic conversion, after which you should be able to switch to the Inovelli-made driver.

Got it, thanks a lot!

so if i have a number of switches, i basically have to remove them all first, then remove the device handlers, and then set them all up? How do you remove device handlers, dont exactly see how. I added a new switch without removing the handlers and all the new features appear there, but groovy still shows it as cloud

i basically have to remove them all first, then remove the device handlers, and then set them all up?

If you are not in a hurry, I would leave them as-is and let SmartThings migrate them. According to ST, this will occur sometime between Oct 15 and the end of the year. That saves you from having to delete and re-add, put back all the notifications, etc. At that point, if you wind up with a default Edge driver, you can simply reselect the Inovelli Edge driver from the menu (that you won’t have until ST automigrates the device).

I added a new switch without removing the handlers

Anything that gets added presently will use an Edge driver, even if there is a legacy Groovy driver present.

groovy still shows it as cloud

Yes, ignore that. The IDE is going away and doesn’t interface with Edge, so the cloud designation is incorrect. Ignore it.

Bry, thanks for the quick and thorough response. Good to know about the potential auto transfer. I may just end up doing it anyway as my automations are pretty weak and planned on overhauling anyway. Especially with the proposed Google home changes coming. Good to know I can remove one at a time and re add without deleting all at once to remove the dh. May just do some as I feel up for it

Any update on the expected availability of the edge drivers for gen 1 switches like NZW30?

So I have a bunch of switches and wanted to “beta test” the new Edge driver on just one of them…but I’m having issues. After enabling the new Edge drivers, I unpaired this switch and then attempted to re-add it… it came up with nothing but a Z-Wave Generic driver. I tried a bunch of different things but was unable to make it work / recognize the switch at all. So I ended up unpairing it and trying to add it with the old Groovy device handler… but now the system seems to think it’s installed but the switch no longer reacts to any kind of commands. I’ve factory reset it and tried again, but now all I have is a switch that turns on and off if I push the toggles, and that’s it. Help?

When I enabled drivers through some kind of website (the Red series driver now reads as “installed” and says that I can’t uninstall it because it’s in use).