Thanks for the dimmers! Installed on Vera plus

After a long wait, I was thrilled to receive the new RED series dimmers yesterday. Thanks for getting them out! Installed two dimmers right away in single pole and 3-way configuration without a hitch.

Just some quick feedback for Vera users. I know vera is not a supported hub for advanced configuration, but they have a large userbase, so others may also run into this.

The pairing process went smoothly, but there is a persistent “PURGING ASSOCIATIONS” message in the vera interface (this old message from the vera boards also references someone with a V1 inovelli having this same issue). Resets and re-pairings don’t seem to resolve this. My two RED switches don’t exhibit this behavior.

Functionally, the dimming functions work as expected, but with a slight delay. It also appears I cannot set parameters correctly. The dimmers just went in, so I’m not sure yet if these issues are caused by the zwave network not being settled yet, or if they are related to this purging associations message. Will check back in later with an update, but in the meantime, enjoying these new dimmers!

I am planning on moving them to my openhab server to take advantage of the advanced features. 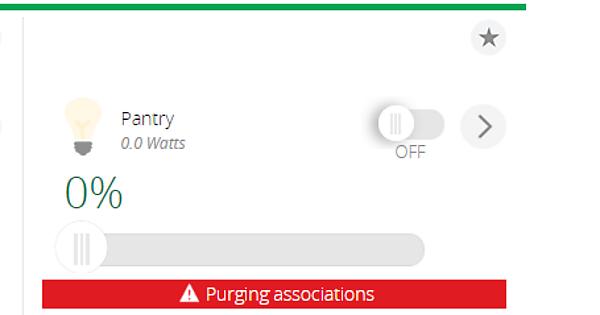 Hey @silencery – this is great news (aside from the purging message)!

Thanks for sharing your experience and confirming the switches work on Vera Plus.

I’ll have @anon14959390 reach out to his contact at EZLO when he returns to see if we can fix the purge and parameter issues.

Thanks again for reporting back and have an awesome day!

What device type did you use? I’m getting this same issue when I select generic zwave. Different issue with selecting some random Other devices. (Like Lots of randime offlines and onlines every 4-5 hours). I haven’t found one that works Well.

Is there a recommended device to choose on a Vera?

I chose generic zwave. With this setup, the purging message came and went over the course of several days, but I just ignore it since I’ve seen other devices in vera also exhibit this behavior.

The slight delay i mentioned in the first post went away after the 1st or 2nd day. Perhaps a result of the zwave network settling a bit?

thanks. for me, in addition to the ‘purging associations’ message, i get 3-6 notifications each DAY about the switch going offline and back online. multiply that by my 30 inovelli switches and it’s quite annoying

the vera controller itself and other devices (a lock and 5 thermos) all stay online, just the switch gives me all the notfications.

i just spoke with vera support and they suggest that when this happens on any device to put the vera very close to the device when first configuring it and re-configure the device again. so i’m going to try that tomorrow and will post the results.

they thought that may fix both issues (and may explain why some people see it and some don’t).

Update. Moving the controller close didn’t help with the ’Purging associations ’message. The messages are there no matter what I do. They go away eventually (so far) but takes at least a week to do so. Meanwhile the device works sometimes, but only occasionally. After waiting a week for the purging associations messages to go away, they seem to work reliably. Need more testing but since it takes a week to make and test any changes testing takes weeks or months. Very frustrating.

Also Takes forever to wait to get the Vera in a state where it wants to accept a new device. Have to wait for the blue ‘add devices now’ message in top. and only then can you do the add and pair routine. Takes 2-5 mins for that to happen making adding 30 devices an all day task. :(.

Same issues here.
In fact I see a security issue comes up randomly which takes the dimmer switch off-line for few minutes at a time so I can’t use it while it’s in this mode.
The “Purging associations” is very annoying and makes the integration distracting.
I’m Running on a VeraPlus with latest UI7 firmware, just purchased it.
Also tried this on a upgraded VeraLite with same results.
Out of two units only one worked. (returned it via amazon)
Best method to include or pair this device is using the 3 taps on the config switch.

i wonder if it’s a vera issue or innovelli issue… and who may be able to fix it.

of my 30 switches painstakingly installed (takes 3-10 mins each to wait for the vera to be ‘ready’) only one works reliably so far.

Received a new RED series unit today.
Will install this one and see if I can get it to respond to Vera without any issues.
I suspect this unit will still have an issue since it’s a ZWave “Plus” protocol.
The on/off Black series Switches so far have not been a problem and work very well.
I do like the packaging, instructions and available features the RED series offers.
I hope when more units get out into the public these issues will be fixed.

I received my new Dimmer (Black Series) LZW31 and experiencing the same “Purging Associations” messages. This switch is configured without the neutral. The Vera controller is only 5 feet away. I am on the latest Vera UI7 firmware 1.7.4453. All my other switches are functioning properly. This is the first switch (non-neutral) switch. Any thoughts.

yeah, i have 30 ‘red’ dimmers and only one works semi reliably with vera. they are just not compatible…

i wonder if it’s a vera or inovelli issue, so far neither one seeems to care to figure it out.