This is my wire diagram, I'm a little lost on how to install a LZW31-SN Switch 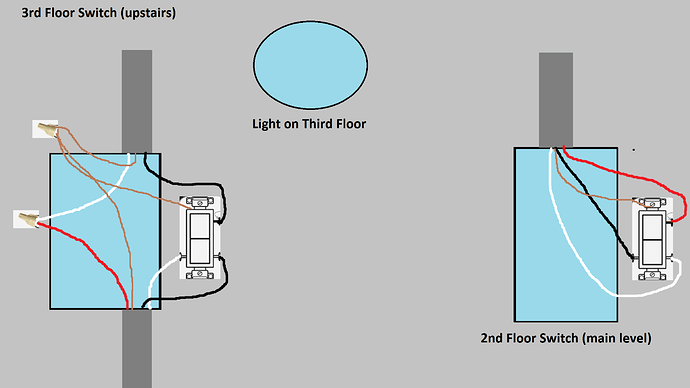 I have the above wire diagram. From my understanding, I believe I have a neutral wire, but am not completely positive as my wire diagram does not match anything posted for installation. I’m not positive if the light is inbetween the two switches, or if the hot wire goes right to the light, then the 3rd floor switch, then second.

The wire color codes are weird as well, as normally it’s my understanding the red wire is the traveler, but it is most definitely the common wire on the second floor… Then this red wire is twisted around the white wire…

I’m lost as honestly to me it’s kind of looking like the wires are rigged incorrectly. Does this circuit look correct to anyone else? I will open the light up should this be deemed helpful.

(Also ground is correctly grounded on these switches, I just drew a line to the switch as there was no ground screw)

Do you have a meter to test for voltage? If so, pull the wire nut off the white/red in the 3rd floor box, separate the conductors and see if the white is constantly hot. Test using the white and the bare ground. Just for completeness, test with the 2nd floor switch in both positions. My guess is that the white will be constantly hot.

Thanks for your reply back! Oddly enough, once untwisting the red and white wires and measuring both one by one with black on the metal switch box, they both check in at 0.500 V. When each was checked probing black to true ground (bare copper wire) and red to the red/white twist, it checked in at 120V. What also checked in at 120V was the black wire, white was around 5V.

Does this help at all? May just wait for an electrician at this point though, I don’t want to rig this switch up since too much could go wrong.

I recommend you call an electrician, as I don’t really fully understand what you explained,

I was looking for the voltage measurements with the with the red and white separated using the bare ground as the other conductor. I think you did that but with “black on the metal switch box”. Are you are to the color of the cable on your meter? If you are, that doesn’t matter since this is AC and therefore no polarity (at least non-technically). Do you mean that you used the metal on the box as the other conductor? If one of the two wires was energized and the box isn’t properly grounded, than that negates the test. (And that’s another issue.)

So it seems that you then tested the separated white and red using the bare copper as the other conductor. (It doesn’t matter which cable on your meter you use for either.) Are you saying the red was hot (i.e. 120V or so) and the white was not hot (120V or so - disregard low amounts of “phantom” voltage)? Did you do it with the 2nd floor switch in both positions?

If you are saying that separated the red is constantly hot and the white isn’t, then your drawing doesn’t make sense, at least to me. I can’t get my head around how that can possibly be given how the red is connected to the other switch.

Somebody double-check me please.

Fairly sure your setup is non-neutral with the power coming in at the light, pretty close to this: 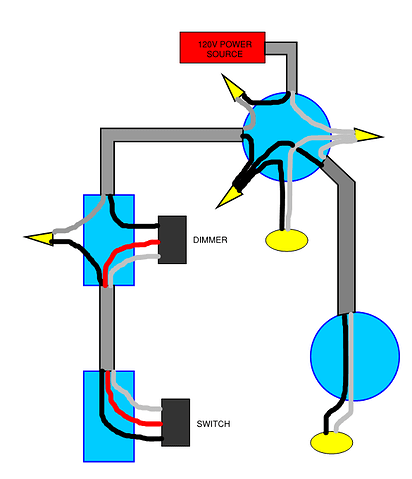 Your white/red twist is your line/hot. Red/white twist isn’t getting a reading when probed to the box because it probably isn’t correctly grounded. Black alone gave 120 while white alone didn’t was likely because of switch position at the second floor.

If that is the case, your wiring case is:

Assuming that is the case, you’ll need an aux switch, a bypass if your light doesn’t draw at least 25W, and ensure you set your parameters correctly for this wiring setup. There seems to be a lot of people struggling to get it set up right (myself included. Switch was installed a month with periodic messing with it before I got correct behavior).

Fairly sure your setup is non-neutral with the power coming in at the light,

That’s what I originally said, but the problem is, if I understood the OP correctly, is that the white from the 2-wire when separated isn’t hot. He said he checked it against the bare ground as well. That’s what doesn’t make sense, at least as most would wire it. The OP didn’t report back that he tested with the 2nd floor switch in both positions, so there is the possibility that the hot he found on the red is not constant.

If that is the case, the only other possibility, and most don’t do it this way, is that the black from the 2-wire is the constant hot.

@teac Please confirm my questions in my prior post. Also, remove the black in the 2-wire in the 3rd floor box and test between it and the BARE GROUND (not the box) to see if that is constantly hot. Test with the other switch in both positions.

If that is the case, your wiring case is:

As I noted, the OP says his white isn’t constant hot, so that’s not going to work. That would be the conventional wiring solution, but not for him. We have to confirm his findings and find the contant hot.

@Bry I italicized some modifications I made, as you noted, sure seem like the muitimeter wire colors were also being referenced, which is throwing things off a bit.

Thanks for your reply back! Oddly enough, once untwisting the red and white wires and measuring both one by one with black from probe on the metal switch box, they both check in at 0.500 V. When each was checked probing black from the probe to true ground (bare copper wire) and red from the probe to the red/white twist, it checked in at 120V. What also checked in at 120V was the black wire, white was around 5V.

How I read it was the red/white twist carried 120V, both singular blacks carried 120V, and the singular white carried nothing. I can’t tell if Red/White was split and tested to copper because it’s worded both like it was and wasn’t at the same time.

@Teac I’d recommend (turning off the breaker, given) separate white/red and detach the black from the 2-wire from the switch (top black in your diagram). Turn on breaker and test the separated black and white wire each to the copper. Chances are one of those two are the constant hot. If one of them are, check that now the separated red, as well as white and black still on the switch now show no voltage; if they don’t, you have some version of the non-neutral I linked. If results are anything other than that, it’s probably electrician time.

The non-neutral setups tend to vary wire color choices. I had black tied to hot, inovelli diagram had white tied to hot, and I suspect you have red tied to hot.

I believe you all are correct, right after posting this I found the image doublepedaldylan posted and I believe that is the way to go. I needed to wait for Aux switches to arrive which should be here today. Will give this another go and report back, many thanks to all!