Can you explain how the traveler terminal for on/off switches works with the 2nd non-smart switches?

From the diagram of the 3-way with aux (2 terminal switch) the aux switch seems to connect the traveler to neutral. This would mean the LZW30 traveler terminal acts like an input to sense a change in the aux switch.

From the diagram of the 3-way with dumb switch ( 3 terminal traditional 3-way switch) the LZW30 traveler terminal seems to act like a 2nd output (in addition to the load terminal) to simulate the two wires of a traditional 3 way switch.

You’ve pretty much summed it up as to how the switch detects the various secondary switches. The missing piece is that there’s an internal MCU that will auto-detect which secondary switch is connected to it.

I’m afraid I’m past my level of expertise here being the marketing guy! @EricM_Inovelli – can you explain a bit further how it works?

@EricM_Inovelli , @Eric_Inovelli With nothing connected to the Traveler terminal it has around 56 Volts AC both when the LZW30 is off or on. Do I have a bad switch is this to be expected?

Can you draw out what you have setup? I kind of lost you here:

After powering up the LZW30 I connected a switch between neutral and traveler and it tripped the circuit breaker the switch is on.

– it’s getting hard to keep up in the forum! 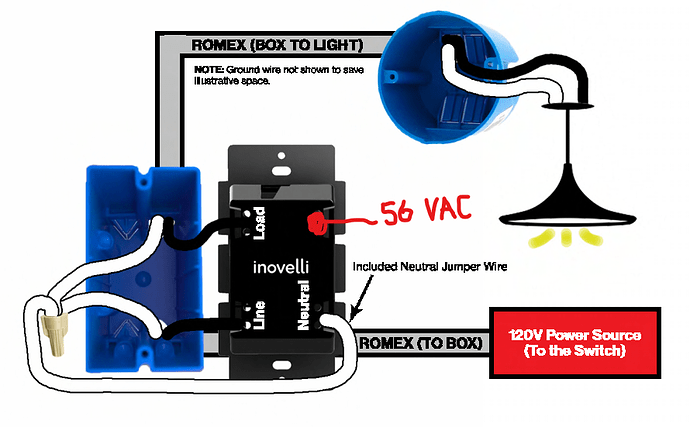 When I tried to connect a switch between Traveler and Neutral like this.

Hey @Automate – I’ll test this out on Monday with a multi-meter on my single-pole setup and report back any findings.

In the meantime, could you remind me what you have at the 3-Way side (an aux switch or a dumb switch)?

I was trying an Aux switch at the time the circuit breaker tripped but I’m also considering using a traditional 3-way / 4 -way switch.

@EricM_Inovelli, did you get a chance to check the Traveler voltage when its not connected to anything? Both when the LZW30 is on and off.