So my current wiring is in the photo. I’m trying to figure out if it’s worth trying to make the individually addressable LED strips work or stick with standard LED strips and just stick to having them all operate the same in terms of color, effects, etc. Individually addressable would be awesome, but I don’t have an easy way to bridge the gaps (range hood, sink areas) without running a lot of extra wire inside the cabinets and drilling through cabinets up into the ceiling to access from the attic. I believe the individually addressable have to be wired in a linear flow starting from the first (power source) and moving through each strip until the end.

The wiring is 12-2 romex, so technically there is a hot, neutral and ground to each. I’m not sure of the specifics of the LED strips but was wondering if I could use the hot and neutral as an in/out and supply the black/hot with power in and run the white/neutral with power out back and forth from the fixtures to the junction box to create a somewhat makeshift linear wiring flow.

Anyone have any creative ideas for something I could do to utilize the Smart LED strips?

I currently have Good Earth LED under cabinet lights I got from Lowe’s and they flicker and buzz really bad with my current Leviton Z-Wave dimmer (I’ve tried innoveli’s dimmer too, and GE’s z-wave dimmer, same issues). The LED’s claim they’re dimmable but apparently only with the older style or non smart dimmers. Plus I want to do some more unique lighting while also being able to use the typical soft white which will be the primary use for these lights. 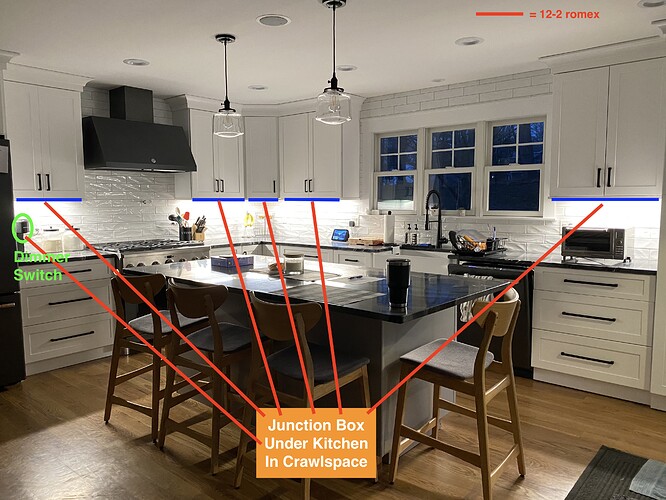