Okay, so this is an odd one for me. I guess this could be voltage coupling onto the load wire (even though no current should be flowing in any parallel lines), but I’m definitely seeing something odd with my recently installed LZW30 switch and LED string lights.

It’s a little difficult to make out in this picture, but very obvious at night. All 48 1W bulbs have the slightest glow to them when the switch is in the off position (hey good news, they dim!). Measuring about 11VAC at the outlet, which seems like a lot. Any ideas? 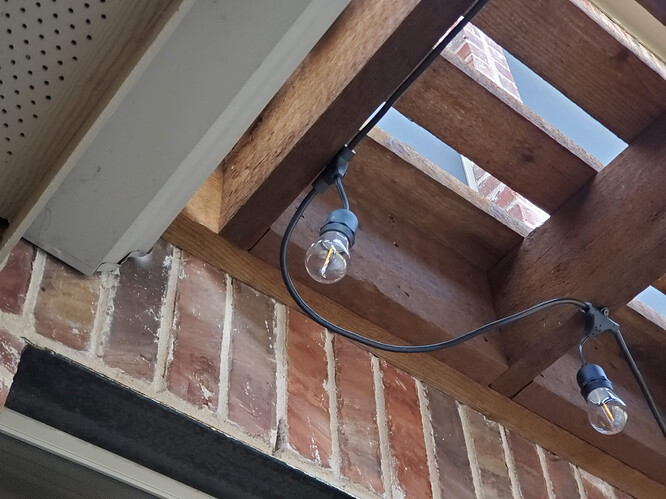 Both the switch and the dimmer I’ve found to leak a little bit of voltage when off even when used in a neutral setup— such is just the nature of the power control mechanism used in each. Depending on the type of bulb you have, this can cause them to glow faintly even when the switch is off (typically, ultra-low power LED bulbs).

The answer is either to install a bypass or change to a bulb from the compatibility list that doesn’t require a bypass (i.e., functions as a bypass itself).

I hired out putting in this outlet and switch due to the awkward location, so I’m questioning some things unfortunately. I am in a neutral setup in this case, otherwise the switch wouldn’t be working.

No problem installing a bypass if this doesn’t look too odd.

It could be capacitive coupling but likely not on a 2-way. Agree with @darthandroid, it’s probably just the switch leaking a bit and the bypass should resolve it. Not the first time someone has fixed the issue even in a neutral configuration.

Thanks @darthandroid and @Bry! I’m not used to a mechanical relay and stray voltage appearing in the same device, but it must be some of the sensing circuitry being naughty. Time to use those reward points and get a free bypass!

My understanding is that there is a resistor+capacitor crossing the relay to prevent arcing when the relay disengages. This has the benefit of not damaging the relay when inductive loads are turned off (which would otherwise arc between the relay contacts for a moment, slowly vaporizing the contacts a little more each time the switch is turned off), but the caveat of leaking just a little bit of power/voltage through the relay even when off.

My only experience is with aircraft, and I think we typically deal with that using flyback diodes, which don’t allow voltage to leak, but my electrical engineers perform more voodoo magic than I care to let them in on, and that might not be appropriate here.