Will this Kichler fan work with LZW36?

Curious on thoughts from those much better with this stuff than I on if this fan will work with the LZW36. Really despise the switch that came with it, but not sure if it’s enough hate to buy and install an entirely new fan.

Trying to avoid cracking it open again for wiring pics, but will if needed.

It looks good to me! The reverse switch is located on top of the motor. You will only have three speeds with the LZW36, though… 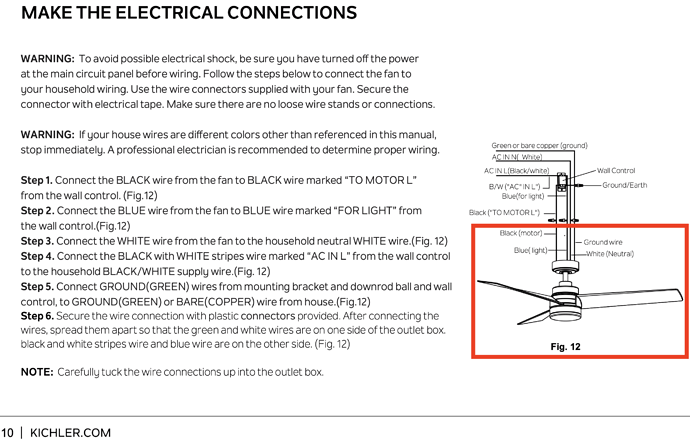 Maybe, maybe not. A couple things to think about.

The wiring at the fan appears to be satisfactory. That is, if you presently have the fan installed with both fan and light switches as in the documentation, you have a 3-wire between the switches and the fan. If that’s the case, why switch to the Inovelli? You’ll gain a blank slot in the switch box, and gain a different type of speed control. You’ll lose one speed.

Most, but not all, switch (pun intended) to the Inovelli because they don’t have a 3-wire to the fan.

From what I can tell from the documentation, this fan has a fixed LED light. Which means if the LED doesn’t play well with the dimmer, you won’t have the option of switching it out. You’ve been making due with a switch for the light, do you really need a dimmer?

Great comments. The light has never worked, which could be another reason i should have mentioned wanting to adjust it. It could be a fault with the light/fan, or the switch, or just my wiring. Either way I guess this will be another fall/winter project to crack it open and take a further look into this. Since the switch is proprietary, i couldn’t test if it was the switch or not with another fan switch i had.

Since the manufacturer switch already had a combined (light/fan) into one switch approach, i already have a hole in my gang box for this one.

Cluster in many ways for me picking this fan.

Oh, but it was such a good deal.

I took another look at the PDF, not on my phone this time. I can see how the switch is a dual function in a single slot, so disregard my comment about gaining a slot.

Since the light doesn’t work, I would start by pulling the combo switch and seeing what you have for wiring. You’re looking to see if you have a 2-wire or 3-wire going to the fan. I suppose it’s possible that you only have a 2-wire going to the fan, and that’s why the light doesn’t work. If that’s the case, the Inovelli switch might be a good fit. But if you do have a 3-wire, I’d rethink things.

I got a Kichler Volos and used the lzw36 - the fan only goes reverse. I previously got the Minka Aire Pure and it works great. Really bummed about the Volos, and up for suggestions (can I just switch a couple wires in the canopy to fix this?)