My current wiring is shown in the following image. I’d like to use Aux switches in all the locations except for a single Red Dimmer. I can also replace the aux switches with Lutron Caseta Pico’s if required. 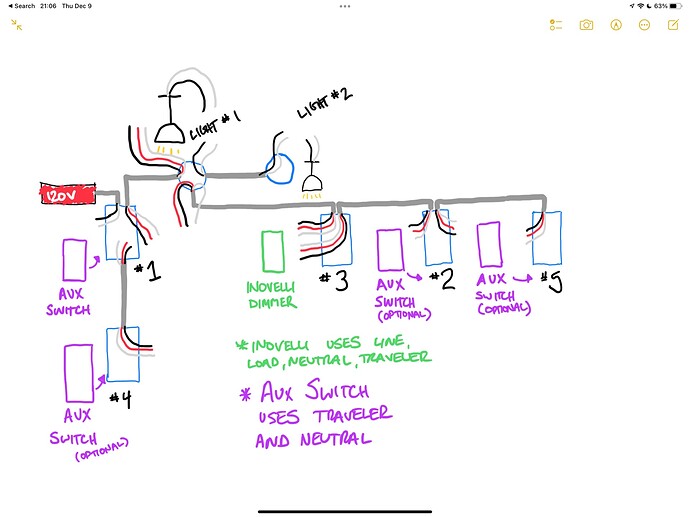 Your diagram can’t work. For that to work, you need a line, load, neutral and traveler to go between the light box and the Inovelli box. The Inovelli can only work in box #1.

Pardon, does he really need a fourth load line? Fundamentally, he’s just wiring up a single dimmer to the load. The auxiliary switches just need a line and neutral. Couldn’t he use the traveler from #3 to the lights as his load?

Couldn’t he use the traveler from #3 to the lights as his load?

The problem is that there is no way to get a traveler to Aux’s 1 and 4, because the third conductor from #3 heading back that way is already taken for the load to the light.

The auxiliary switches just need a line and neutral.

Aux switches need a traveler and a neutral, not line and neutral.

There is no way to wire the Inovelli with a neutral putting the devices in the locations indicated.

Thinking about it more, it could be done installing the Inovelli without a neutral. Then, you connect the aux switches to line and traveler. So, the 3 wires from light #1 to switch box #3 would be line, load and traveler. Then, line and traveler and sent to the other 4 boxes.