Hi,
I’ve replaced quite a few switches already, but this is the first I’m doing with two switches in the same box - one controls the ceiling fan and the other controls the lights attached to the fan. I was looking for some confirmation that I’m doing this correctly. I have the new Inovelli dimmer for the lights (which happen to be Sengled zigbee RGB bulbs) and a GE Fan Control.
The 3-wire cable I believe is the Load going to the ceiling fixture, one of the 2-wire cables is the source, or Line, and the other 2-wire cable goes to another outlet? The switch on the left controls the light, and the fan is controlled by the one on the right. I omitted the ground for simplicity in the diagram. I have a neutral which is the pigtail in gray, so I’ll connect those to each new switch as well?
Thank you! 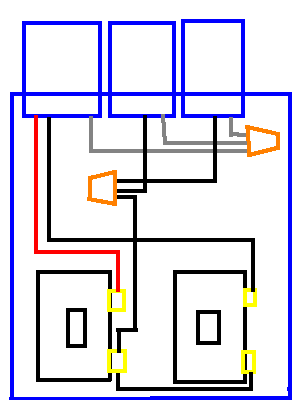 Assuming the diagram of the current setup you supplied is correct then its pretty easy.

The switches would just drop right in and wire up the same way. However, you will need to add the neutral and it would be easiest to do it similar to how the line is done where in goes from the wire connector to the first switch and pigtailed to the second switch as this would probably make it easier to fit things back in the box as connecting 5 neutrals together is pushing it a bit.

My other concern is that I don’t think these switches are meant to be used on fan’s. It states it in the documentation that it can ruin the motor. The light may be fine but not sure about your fan. They have recently released a light fan combo switch that you may want to check out. But its a single switch.

Thanks, this was helpful! I also bought the GE zwave+ Fan Control for the fan, only using the Inovelli dimmer for the lights.

(which happen to be Sengled zigbee RGB bulbs)

using the Inovelli dimmer for the lights

Do you have the Inovelli’s internal relay bypassed? The dimmer should not be directly powering smart bulbs.

Hello,
Yes, I am going to bypass the internal relay when I install it. Has me a little nervous in that I’ll lose the ability to turn the lights on in this room if the ST hub is down, but going to give it a try. Worst case, probably keep the dimmer but switch the bulbs and then re-enable the internal relay.