I own a Black Series Dimmer (LZW31) and am trying to get it setup correctly with a lower wattage bulb. The switch is hooked up to a light/fan. My house is older and does not have a neutral wire in the light switch gang, which is why I purchased this model. When I have an older, not as bright light bulb plugged in, everything works as expected. I’d like to get a newer, brighter bulb installed, as the currently working one does not do a great job as far as brightness goes.

When I install the newer LED, the switch actually does (mostly) work. It turns on to full power just fine, but when I turn it off, the light is still on (although fairly dim). After doing some reading, I found that I probably needed a bypass, so I purchased the recommended Aeotec bypass. I installed it in my light housing, with one end of the bypass connected to the live wire and the other connected to the neutral.

Unfortunately though, the issue is still persisting. It seems like the bypass isn’t actually doing anything. Has anyone solved this problem before or am I missing something obvious?

LZW31 is not rated for inductive loads like a fan. Please ensure this is serving ONLY the lights on the fan?

Bypass needs to be wired across the load, not between the line and neutral.

Adding to the above:

What is the wattage of this bulb? (Actual wattage, not incandescent “equivalent” from lux.) Even with the bypass installed, the manual says you may still need at least about a 6W load. A single bulb is usually more than this, even LED, but it’s bit vague with the “about” thing, so adding another bulb, if possible, or trying a higher-wattage option may be worthwhile.

LZW31 is not rated for inductive loads like a fan. Please ensure this is serving ONLY the lights on the fan?

Good to know! I did have the bypass installed before the fan itself, so I will try and switch it to just the bulb. Would this matter though if the fan is never turned on? Alternatively, could I just not connect the wire that powers the fan?

As for the wiring, forgive me because I know the basics but I am not an electrician. I have 3 wires coming from my ceiling. One is the line (my voltage tester detects it when the fuse is flipped on), and one is a ground wire. I assumed the other is the load, but when I was reading up on the process, I was seeing everyone call it a neutral so I doubted myself. Here is a couple pictures of the wiring: 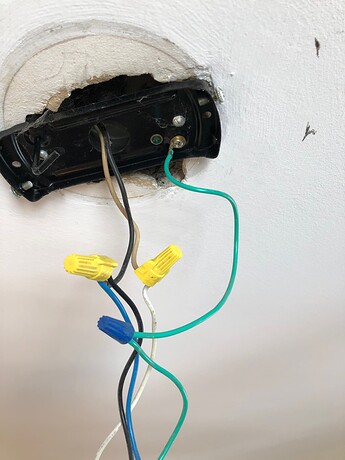 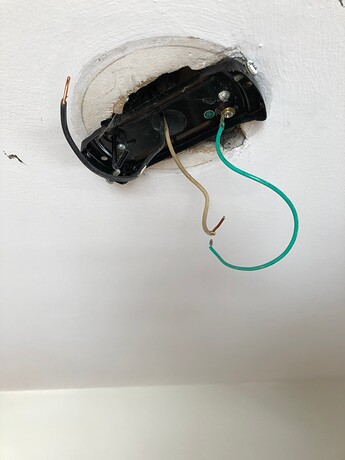 So which wires would I connect the bypass too?

As for the bulb wattage, the less bright bulb that works is 60W, the brighter bulb that doesn’t quite work is 9W

The BLK should be load, WHT should be neutral, GrN is ground.

Picture of the switch box would confirm, but 99.9% sure you have line going to box first then to your load box over 14/2. You have to have a neutral at a light, fan, or outlet box otherwise the item wouldn’t function.

Both the line and load are black at the box. Looks like there is a white wire, but I missed it tucked back in the box as it wasn’t connected to the switch. Its two white wires taped together 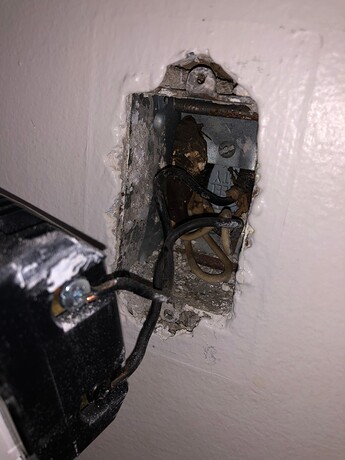 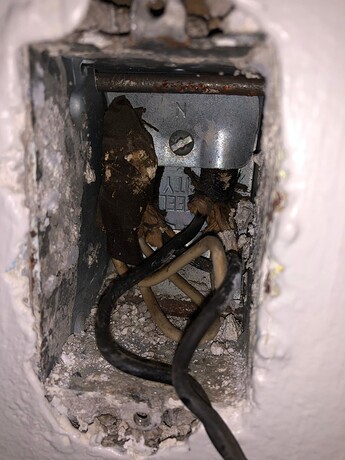 Ok, so this is not a non-neutral, it’s a neutral configuration with a single 2-wire delivering a switched hot and neutral from the switch box to the fan box.

1 - Since you have a dimmer, you cannot use this with the fan, so at the fan box, remove the conductor going to the fan (probably black) and cap it off.

2 - At the fan box, disconnect the connection between the white neutral and the green ground going to the fan strap. Neutrals should never be tied to grounds except at the panel, which isn’t here. 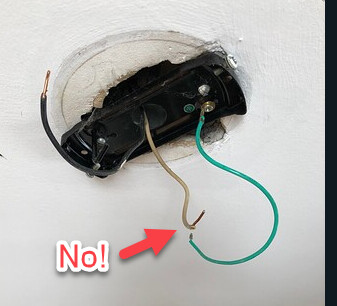 3 - At the fan, white coming into the box with the white from the fan. Black coming to the box to the conductor going to the fan light (probably blue).

See if that works as is with the fan out of the equation. Having a motor load to a dimmer not rated for that type of load probably skewed how things were working.

The light is exhibiting the same behavior as before. Even when its “off”, it is still dimly lit. So, for the bypass, which wires do I connect it to?

which wires do I connect it to?

Connect the bypass with one wire on the neutral and the other on the switched hot for the light. (Probably the blue wire.)

Connect the bypass with one wire on the neutral and the other on the switched hot for the light. (Probably the blue wire.)

That did the trick! Thank you all so much for your help

Mark a solution please so we know it’s resolved!