The Z-Wave market seems to be missing a way to control the 6-wire LED strips with RGB and color tuned white. Can we get one from Inovelli? 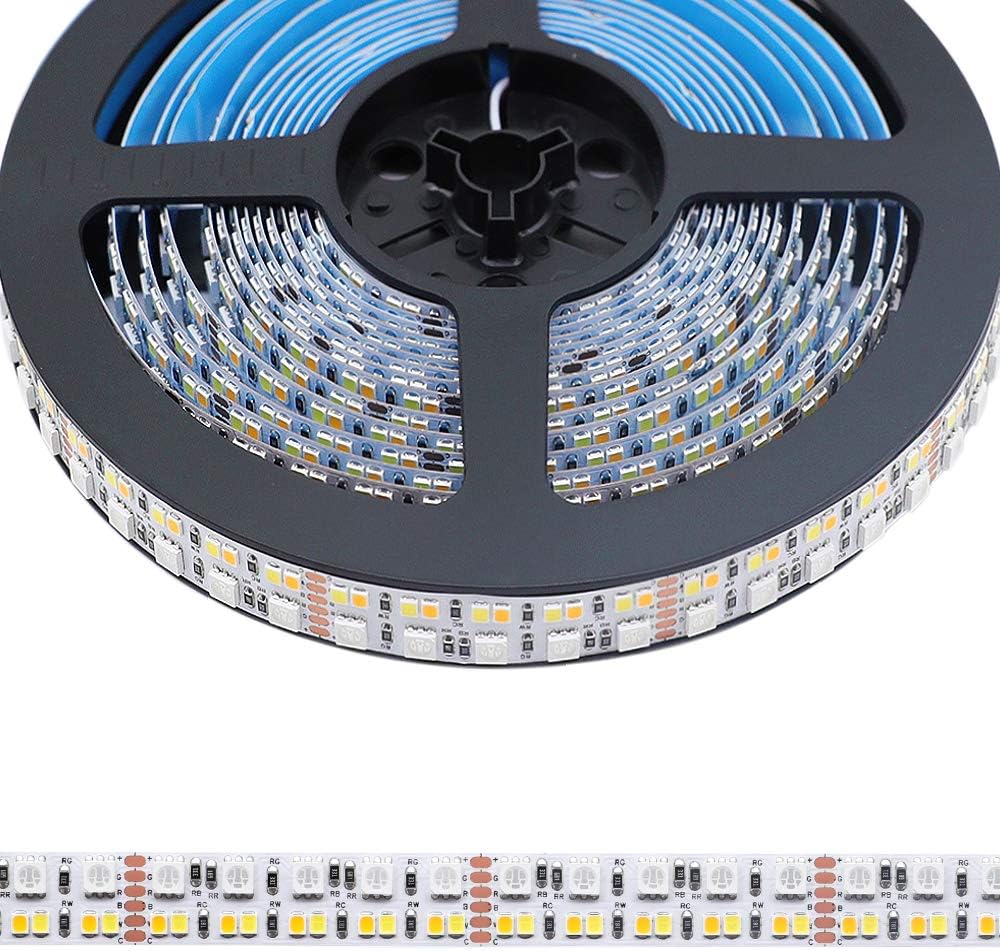 Size:DC24V 5meter/16.4ft This LED Strip PCB is 14mm Wide, please use a UL-Listed switching power supply, donot use power adapter, Do not use with other types of RGB+CCT LED strips, they do not have the same...

The ONLY device I can think of that supports this is the OOMI/Aeotec Z-Wave Strip. 24v controller that does up to 3-5 amps, I think.

There are a few left on eBay from OOMI.

They’re nice, but don’t report changes on basic set events, so you need to poll them every so often if you use that.

They make their own light strip

They make their own light strip

I saw that, but that kind of programable light strip generally isn’t the same market as what I suggested. 16 feet per controller is pretty limiting for indirect room lighting, and I don’t think you can boost the length in any way using an extra transformer.

Maybe they could be paired together or something.

You could use this if you didn’t connect either ww or cw. It’s only 5 wire.

You could use this if you didn’t connect either ww or cw. It’s only 5 wire.

Agreed. There are a few brands with a 5-wire controllers, but then you end up with no way to get the color tuned white. Hence this product suggestion. Without being able to control both types of white, there is no easy way to get “candle light in the evening” and “daylight” in the day, or something in between to match the room lighting.

They just exited the light strip arena (see: Lightstrip Sale & Discontinuation), so I’m guessing they’re unlikely to enter it again so quickly, even with a slightly different product (and especially in Z-Wave right now, given the issues they’ve had with their manufacturer). That being said, they do have a history of listening to the community, so maybe some day in the future if they see the potential!

FWIW, I think this would be cool as well. I don’t use lightstrips that don’t have tuneable white, so the plethora of 5-wire controllers are a no-go for me, and there are very few 6-wire ones (can’t think of any Z-Wave ones, but there are a couple off-brand Zigbee ones plus Hue, though they don’t really market that for standalone use and I’ve never tried, nor would I want to at that price).

So, this would be pretty cool! Like, basically a “light” version of their old lightstrips, just an RGB+CCT controller that can work with simple RGB+CCT lightstrips. My understanding is that part of what made their “old” lightstrips more expensive is the fact that the lightstrips themselves needed fancy electronics (and special connectors/endcaps where needed) in order to handle the “addressable” effects (also a point of confusion for some: as-is, the controller can address individual LEDs with the built-in effects, but you can’t on a custom basis). No worries about that here.

Alas, this might be just a dream for the time being.

can’t think of any Z-Wave ones

You and I have been having the same dream. After iNovelli disco’d their strip I stopped thinking about LED projects. Recently I upgraded my OpenHAB software and hardware and then started looking around again. I ended up posting a couple of things on the OH forums about this very topic. There’s plenty of RGB and RGBW strips and a few z-wave controllers but if you want RGB+CCT (or RGBW+W or RGB+W+WW or RGB+WW+CW… you get it… a thingy with 5 lighting channels- RGB and the a turnable whites (cold and warm channels) that allows for a predictable absolute color temp between 2700k and 6500k) there’s nothing in the z-wave world I have found.

Where I’m leaning on this either a DMX deployment or an addressable LED deployment with WS2811 (24v) strips. Certainly the more “modern” approach is WS2811 if it can be done directly- I’m not a fan on having to use microcontroller or other SBC’s and then having running some MQTT software just to use a strip in my kitchen. If I have to do that then to me DMX using Art-NET or sACN makes more sense (even though that would be on wifi- I don’t think anyone should be forced to zigbee either). Something like the SmartShow AirPixel Mini II looks to be a compelling solution (AirPixel Mini II - SmartShow Lighting). I haven’t dove into this myself yet but my current understanding on it is that the DMX binding would at least give me the channel level control, which is all I want but I could also use QLC+ (only thing available for Linux apparently) to take advantage on the addressability of the LEDs if I ever wanted to do something substantial… not in the kitchen

That said, it would be brilliant if iNovelli came out with a basic 5 channel z-wave LED controller that can drive 5v to 24v strips. If addressability could be done (i.e. a separate set of inputs or in a different device) it would be cream on top but I think the market most immediately needs the basics. There’s lots of strips for both types just not too many concise ways to deploy and that seems to be keeping people on the sidelines.

For what its worth to @Eric_Inovelli and others, if Qubino can sell their RGBW controller for around $80 and Finbaro can sell theirs for around $50, I honestly think iNovelli could hit it out of the park to have an offering that no one else has in this range. I’d personally would still go for it at a bit of premium because I know this is challenging environment but I definitely don’t think you guys have to make the actual strips at this point. Just one controller to rule them all

I found that off the shelf products for LED strips for what I wanted to do were all lacking in some way.

I wanted something to control LED strips mounted in a crown molding around the top of the walls for indirect lighting. I ended up buying some circuit boards from Ebay and soldering them up. I needed 24V and about 10A total, broken into 2 x 5A sections, and not much out there could do it. The board is 5 channels and ESP8266 based so I’m using ESPhome on it.