I’m maybe 90% done adding Z-wave devices to my network: I have around 60 nodes, comprised of a few motion sensors, door locks, appliance modules, but the brunt of the network is made of up of Inovelli switches and dimmers.

I plan to add some more motion sensors and possibly thermostats (unless I end up with a home-grown, non-Z-wave-based solution for those). I’m using Home Assistant and Node-RED for automation, but I don’t believe those are playing much of a part in the slowdowns I’m seeing. Most devices were included as S0 non-secure, except for the door locks and IIRC some motion sensors.

I’m wondering if there are steps I can take to prevent Z-wave network delays. I have several Red Series dimmers that report power usage. All of the related parameters are set to defaults:

I’m not currently interested in power reporting. Can I change these, or any other parameters, to reduce network traffic? What other changes can I try to speed things up?

Most devices were included as S0 non-secure, except for the door locks and IIRC some motion sensors.

S0 is a secure pairing. AFAIK S2 improved on all the traffic S0 created.

Security is something we all care about. The valuables in our homes and workplaces are generally things we keep an eye out for, whether it be by simply locking doors ... Read moreWhat Is Z-Wave S2? – (List of S2 Devices and Beyond)

Other than this, S2 devices also have better battery life, greater reliability, and less latency than S0 devices, due to the usage of a single frame command process rather than the former three-step process for security.

S0 is a secure pairing. AFAIK S2 improved on all the traffic S0 created.

Hmmm… I probably have that incorrect, then. I used standard inclusion in ZwaveJStoMQTT: 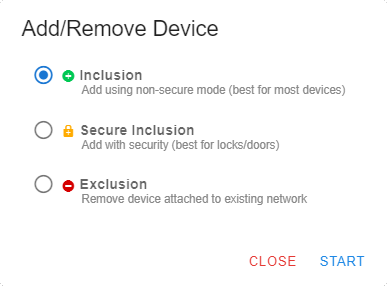 Have you done a Zwave repair/heal lately? It should be done each time a Zwave device is added. I’d also check for dead nodes.

Thanks. Yes, I’ve healed the network. I cleared dead nodes quite awhile ago, and none have come back.

Recently I’ve broken up some of my groups so that my network isn’t flooded with commands. It’s helped a lot, but I’m still looking for ideas to optimize.