I have wired a dumb switch and Red Dimmer (LZW31-SN) according to the schematics as best I can tell. (pics below). I have also set paramenter 22 to 1 and confirmed this using the Basic Z-Wave tool in Hubitat.

I’m either doing something very wrong - or the electrician screwed up the wiring and the dumb switches were wired wrong to start with.

Any help would be appreciated. 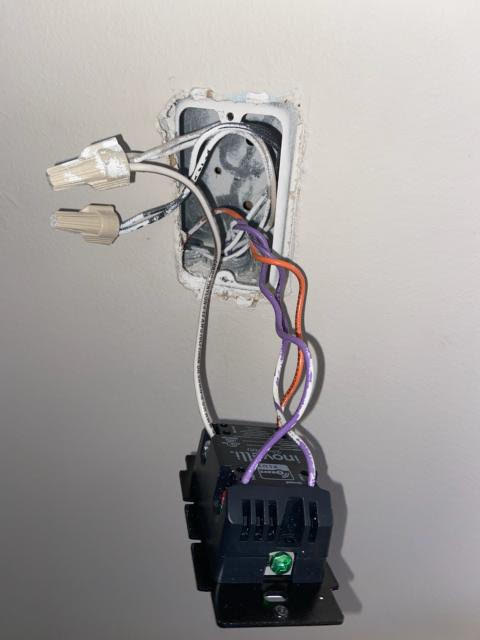 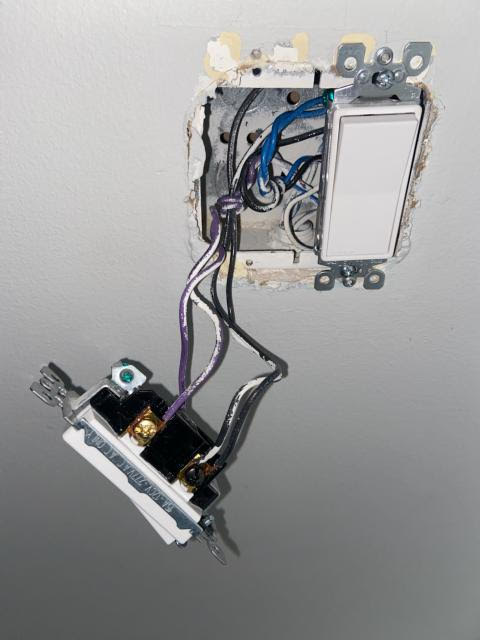 @smilerz welcome to the forum! There are a number of far smarter people than me who frequent, so I’m sure we’ll get you taken care of.

If the LZW switch is turning off when you turn off the dumb switch, I would assume you are switching the line input to the LZW. Does that wire nutted pair of black wires contain a line wire? If not, you may need to switch which box the Inovelli switch is in. I ran into a situation where I had no available wire to provide a constant line voltage on in the 3-way configuration I wanted, so had to sacrifice and move the switch to the other side with an aux switch in the original location (to maintain smart control).

What @fatherdoctor said. You have a Line in one box and a Load in the other.

Pull the Orange wire from the Line on the Inovelli and USING A METER, test between the Orange and the White Bundle. Do you get 120V WITH THE DUMB SWITCH IN BOTH POSITIONS? If the answer is no, then . . .

Go to the dumb switch box. It’s hard to tell from your pics. Is there a neutral in there? If so, remove the BLACK wire from the common black screw terminal. Test between that wire and the neutral for 120V WITH THE WIRES REMOVED FROM THE INOVELLI.

The box that has the constant 120V gets the Inovelli.

Unfortunately, the dumb box doesn’t have a neutral. I don’t have a meter yet, but one will be delivered on Sunday. I’ll test the orange and the black wires for voltage.

If the orange is not live and the black is - is there a way to wire that box for the Inovelli?

@smilerz I’m curious what the orange wire is doing since it’s not in the other box. If one of the two black wires is unswitched line voltage, you can use it, but the wire its attached to may come into play and you’ll want to know what its doing. Also, do you not have ground wires?

The box itself is grounded. It’s newish construction with whole house conduit so all of the switches use metal on metal contact with the box for ground.

The orange wire is not hot - it is ‘live’ wire that goes to the light. 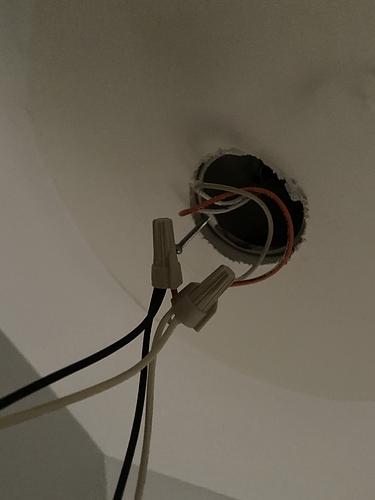 Maybe I’m seeing it wrong, but if the orange wire is the load wire for the light, you may have your LZW switch wired wrong. The orange wire should be on the load terminal, but I think you have it on the line terminal.

Correct. If orange is at the light, then it is load if I’m looking at the picture right. I was thinking line to light first then drop line down from there.

ght first then drop line down

Yep - that’s right. The orange should be load - I made poor assumption on what they were doing with the colors (and I thought line was typically wrapped around load/traveler).

The question I have now is what do I do with those 2 purple wires? The black is definitely hot.

I think the first thing is determining which hot is hot. To me, the Inovelli should be in the other switch box, but I think we need more info. The purples are travelers, so both are needed. We know orange is load. We just need to wire it out.

I don’t know if I should jump back in or sit back with some popcorn.

The Inovelli needs to go in the other box as the Black on the common screw is the Line. The Load is in the box the Inovelli is in. It’s the Orange.

The two purple are travellers between the two boxes.

Yes, no ground. The conduit and boxes are grounded. The switch gets grounded via contact with the box. The conductors are THHN/THWN.

@smilerz , where do you live that they use conduit? Just curious.

(and I thought line was typically wrapped around load/traveler)

There’s no convention, really. I’ve seen it the other way around with the switched leg (Load) wrapped around the line.

To answer your other question, yes, you can wire a dimmer in the other box w/o a neutral, but hopefully yo can find one there. It’s just easier if you have a neutral.

There is no neutral in that box - just 4 travelers and a hot.

where do you live that they use conduit? Just curious.

Suburban Chicago - some of the towns its code, others its just higher end construction.

I’ll have to figure out where the lines are coming from. I’ll report back if I find it.

I’ll have to figure out where the lines are coming from. I’ll report back if I find it.

. . or figure out if that neutral in the Inovelli box is on the same circuit as the hot you’re going to use.

Ran a neutral to the box and rewired everything - the switches work now. Thanks everyone for the assist! Now on to the ‘smart’ part of these smart switches.

I have had this setup (3 way with dumb switch) for a time now and it is a nice solution as one of my switch boxes is in a concrete wall, with no space for a smart switch.
As said, it works fine, except that from time to time the Inovelli smart switch stops working. I found out that I can resolve this by power cycling the switch at the fuse box.

Which firmware is installed? I had an issue where the reported firmware didn’t match the installed firmware. Installing the latest firmware then doing a factory reset fixed my problem.