Okay, so I’m trying to install the gen 2 red series dimmer and a GE Aux Add-On for my 3-way no neutral setup. Both of the dumb switches currently have one black wire, a red wire and a white wire. None of the wiring diagrams for either the inovelli red series dimmer or the GE Aux show my set up. If anyone can help me understand what I need to do to get these switches wired I would greatly appreciate it. Here is a photo of how each switch is currently wired: 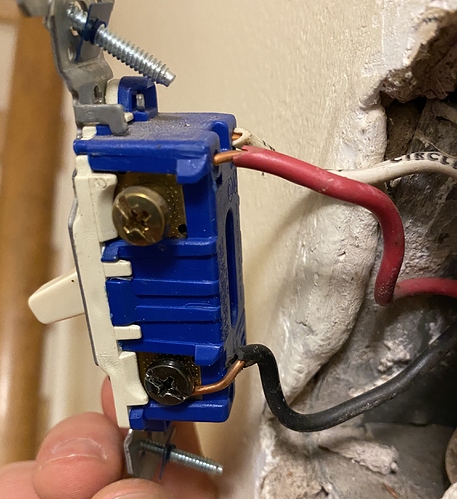 So to clarify, at each of your two switch boxes, there is only one 3-wire romex connected to the switch? If that’s the case, then you probably have power to the light first. And your correct that the Inovelli diagrams don’t show wiring for this configuration.

Can you get at the light to confirm? If you have power to the light, I’d expect to see a three-wire romex there where probably the black is constantly hot.

If that’s the case, the wiring configuration is described in this thread.

Having a hell of a time getting this going here. I have a brand new home and orderd a bunch of Z-Wave Gen2 On/Off Switches. My plan is to automate a bunch of my lighting with my Hubitat hub. The issue I am having is setting up my wiring. All my switches are a 3-way setting, with a dumb switch on one end. I can’t seem to find my particular scenerio in the wiring diagrams provided. I’ve attached upclose photos + labels of switch box 1 and switch box 2. Ignore the switches on the right of each s…

The diagrams in that thread might be a bit confusing because of another devices in the box, so we can try to figure it out here if you can’t make sense of that.

Can you post pictures of both boxes with the switches pulled out so that we can see both the wiring on the switches AND what’s inside the boxes?

Basically what Bry said. After banging my head on what was happening with my switches (I was OP on the thread Bry is linking) these things are a breeze to install now and I did all 10 of mine (even a few 4 way switches as well).

I would suggest getting a multi-meter as that will give you good info. I have one of those “pens” as well but even if there is a little residual current it sometimes gives a “false” (ie if it’s reading something like 0.5v it may go off.)

Anyway, unhook all the wires from your dumb switch. (so it’s just bare wires). and then check each wire. It’s likely you will have one wire (red or the white) that is 120v. While still live go switch the other switch and see that does to your power. It’s likely the red will now to go 0v and the white will go to 120v. If this is the case, these are your 2 travelers, and you would put the red in your “traveler” on the inovelli, and the white in your “load”. You are trying to find the 2 wires that are going back and forth between 0 and 120v when you switch the other switch in your 3 way. That was the easiest way I found to indentify my travelers.

Double check to make sure the black is your “hot” or 120v constant. The wire that is always 120v regardless of what you do with your other switch is your hot, and this would go in your “line” slot on the inovelli.

That’s how I’ve figured all mine out (atleast how I started) and then had to figure it all out from there as non my of wiring situations were in the wiring diagrams. I also have the added challenge of multilple switches being in the same box, and being powered by 1 single hot wire.

Thank you guys so much for your help. I just finished testing the first switch, which is closest to the light fixture it controls. I’ll refer to this as switch A. I tested with switch B on as well as off as you suggested. Here’s what the multimeter indicated:
Switch A ( B Off):
White 120v
Red 45v
Black .15v

…a little thrown off by the 37v and 45v readings. Also, I didn’t find a constant 120v on any if the wires. The only consistent reading was .15v from the black wire. One more wrench to toss into this whole thing. While moving everything around to get some pics for you guys, I found two wires capped together, buried deep in the switch and covered with plaster dust. I almost missed them completely this time around too but the flash from my phone camera drew my attention to them. I cleaned them up as best I could and will submit some pics for you to see. I’m sure this will change things… I’m going to pull my other switch later tonight when the fam is in bed. They are NOT impressed with this project right now. 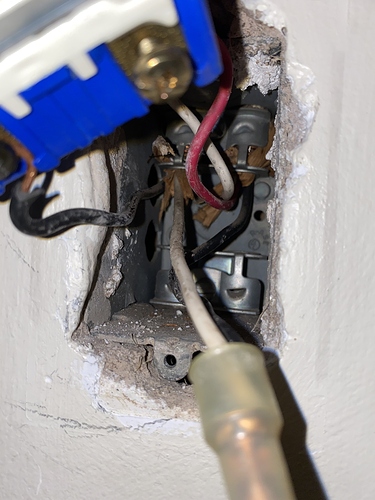 Were there any other wires hiding in the other switch?

Its hard to tell what you have from the photo you posted. It looks like two cable are entering the box. One is 3 wires the other 2 wires.

This is what I think you have. 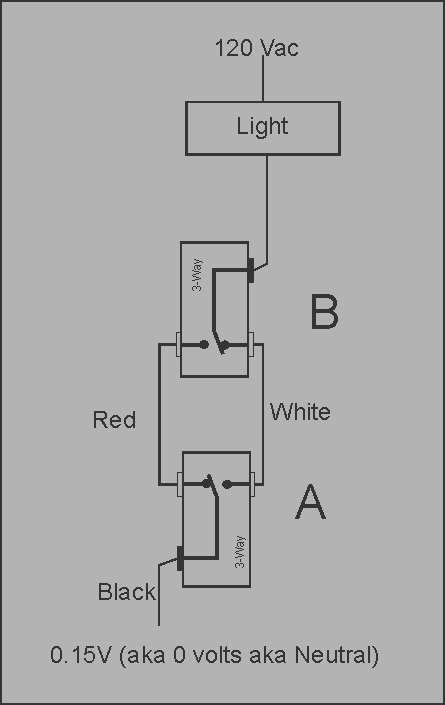 This alone doesn’t help much as we are not sure what the other wires are in the box.

The switch A box has two cables coming in.
The Switch A accounts for a White, Red and Black. But there is another White and black in this box.
Can you describe their connections?

Don’t worry about the 47 volt readings. You are reading a wire that is not connected by the switch positions so it will pickup voltage (but without any real energy) from nearby wires.

Looks like you’ve got just two cables in the box: #1 is the black and white and #2 is the black, white, and red. (No copper ground? Old house?) #1 is probably coming from the load (light fixture) but with out testing you can’t tell whether black or white is hot. Disconnecting wires as the safest way is a lesson I have learned at some cost.

I may be missing something but I believe you need an auxiliary switch as your second - - - not a “dumb” switch. Inovelli doesn’t sell them but GE does.

I pulled the other switch and confirmed that there are only three wires. Red, white and black. Yes, it’s an older house. No neutrals or grounds on either switches. It was my intention to install the dimmer in one location and the GE aux in the other. I’m just not sure which location I should install which or how they should be wired. If my setup is in the wiring diagrams I’m either not seeing or just having trouble understanding them.

I pulled the other switch and confirmed that there are only three wires. Red, white and black.

Can you tell us what wires are coming into the box where switch A is?

Yes, it’s an older house. No neutrals or grounds on either switches.

Point of clarification: In your wiring there are 3 electrical connections (not including the RED wire)

To power any LIGHT you need power coming in on the LINE (black) going to the LIGHT then out of the LIGHT to the NEUTRAL(white). Without both there is no light.

No neutrals or grounds on either switches.

metal jacket on the cable

I believe the below sketch is what you have. I guessing (educated) in some connections so please verify the wiring to the two cables at Switch A.

If this is indeed the case, I think you can get by with a Non-Neutral installation at Switch A and an Aux at Switch B (as you hoped).

If you can verify the below is correct I’ll try to show how the rewired configuration might be. 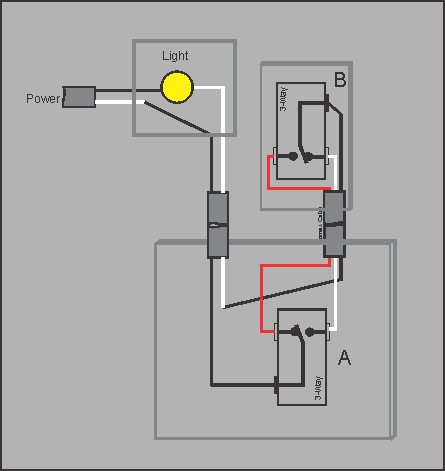 I agree with your drawing based on what we know, but since the hot is being sent to Switch B, wouldn’t the dimmer have to go there? The black 2-wire at Switch A returns the path to neutral.

I think there may be a way if at the light the LINE and NEUTRAL are swapped thereby sending the LINE to Switch A where a non-Neutral configuration might work.

I haven’t worked it out yet but seems possible. I’d have to think on it a mite, and we need to verify the wiring is what the diagram shows.

Okay guys, first I want to thank you very much for taking the time to help me. Clearly, I am a newbie when it comes to wiring. To try to make things easier, I managed to access the light fixture and I took photos of everything I could possibly think off that may help. For the sake of sanity, I’m going to repost the readings from my multimeter and include the additional readings I took today on switch B. I will need to do this in multiple posts as it will only allow me to post a single photo at a time. Here goes… 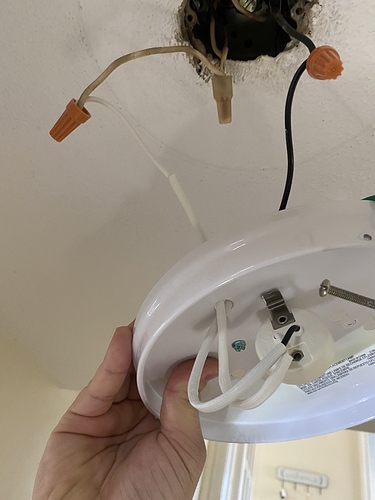 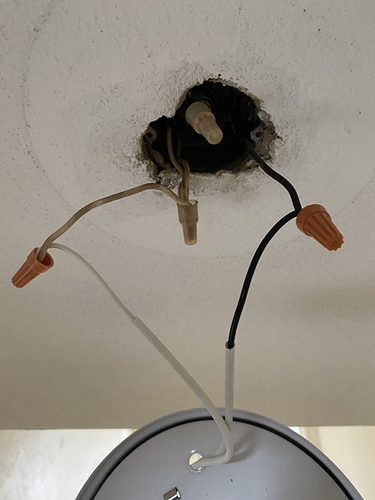 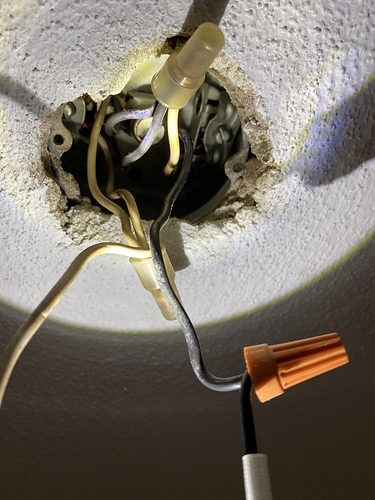 Switch B and Inside Box Photos: 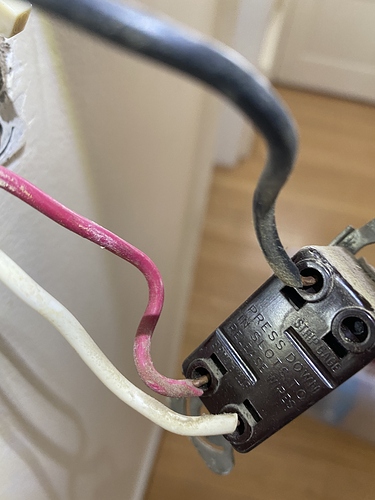 Note that this box has three switches. I made sure that the only wires coming to this switch are red, black and white and I circled those in yellow. 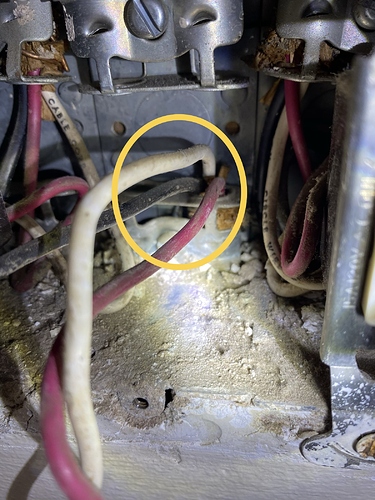 Measurements taken at location where switch is removed with opposite switch installed and in the ON or OFF position: