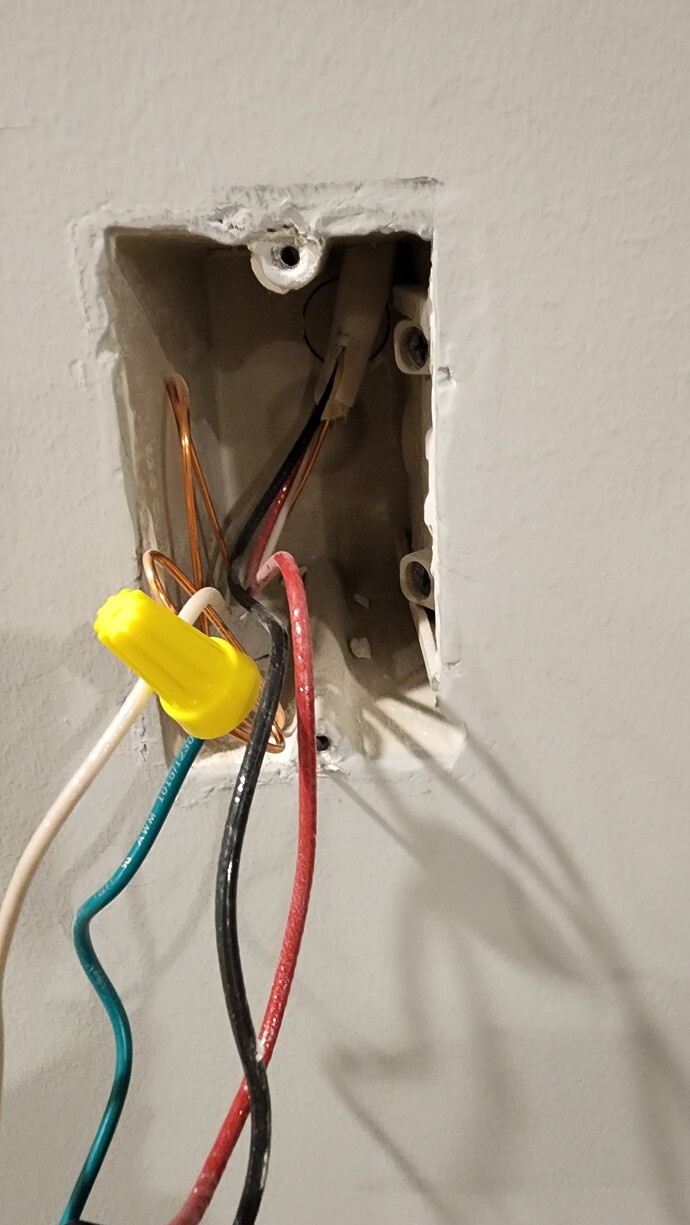 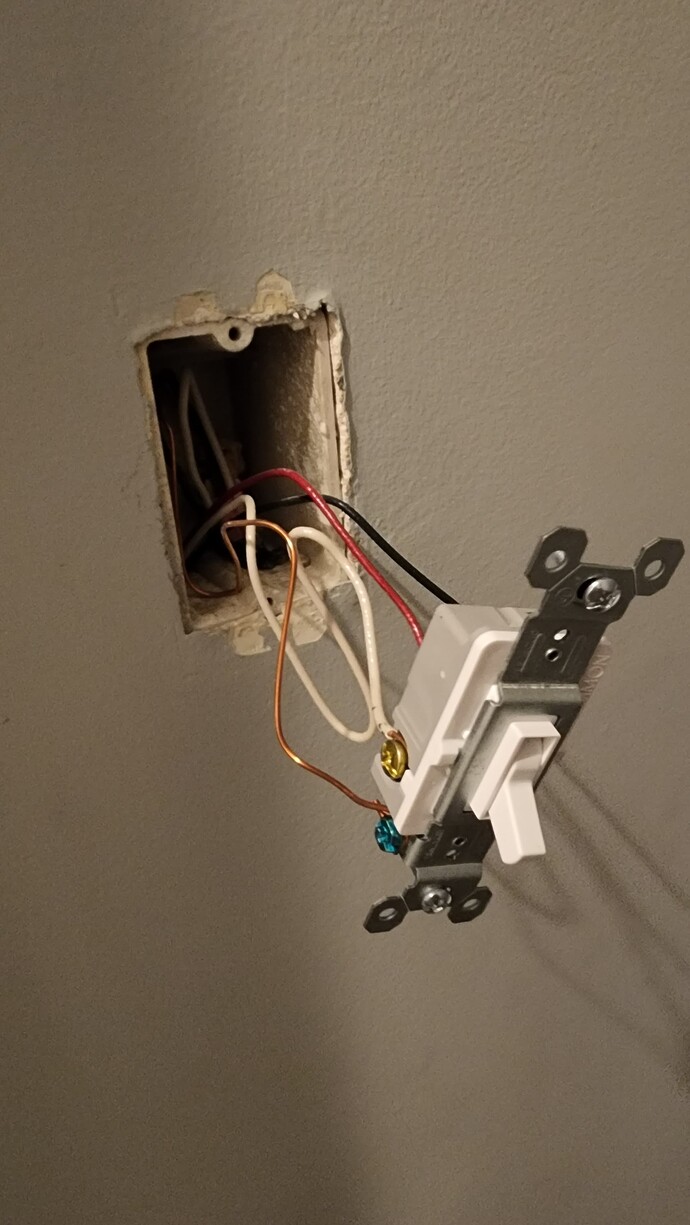 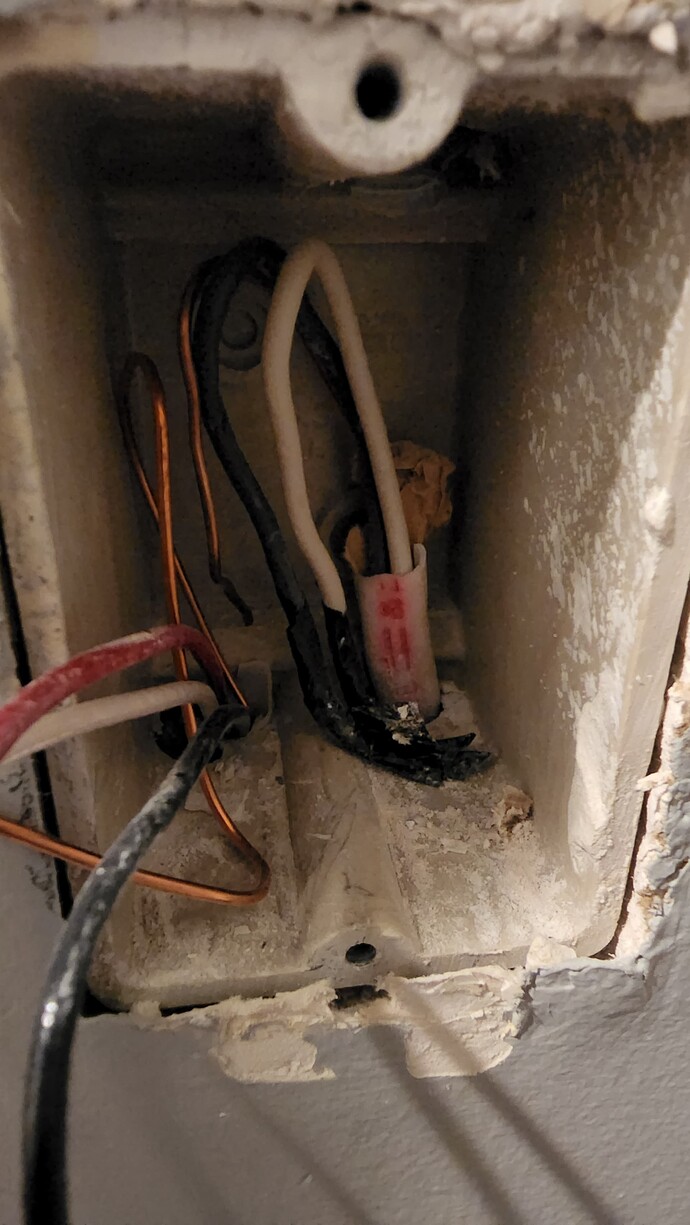 Not sure if there is a question like this they has already been answered.
The 2 pictures with the yellow wire nut are the bottom of my stairs and the other 2 are the top of the stairs. We originally just had just 1 light switch controlling just a light at the top of the stairs and bottom of the stairs. Our basement was just in June of the this year finished renovation where we had a good part of it finished off. All the work was done by a license contractor who had an electrician do all the electrical work. We keep the fancy light we had installed a few years ago but had a new pot light installed on the ceiling above the stairs and and second switch at the bottom of the stairs. I had originally bought a different brand of smart switch a zooz brand one because it didn’t need a special add on switch. So I figured it would just have been a pretty easy standard install. That was until I opened both boxes. So I took some pictures and then closed them back up. I am not an electrician at all but have successfully replaced 4 switches in the new finished area in our basement with smart switch and there was neutral wires in those boxes so that went well. So after some research on Google I think the 3 way setup were I am trying to install a switch is probably wired where the power comes into one of the lights and spits off to both switches. I don’t know for sure because I haven’t opened either of the lights yet. So I am wondering if I need a switch that works with no neutral. And I found your switches when I thought was looking for a no neutral Smart switch and I love that it has seen control so I can turn on all my basement lights from the top of the stairs before walking down stairs. I use smart things as my smart home platform if that matters.

You have one 3-wire Romex in each switch box with each of the three conductors attached to the three terminals of the switches. (Ignoring grounds). As you suspect, this suggests a power to the light non-neutral configuration as in the drawing below. 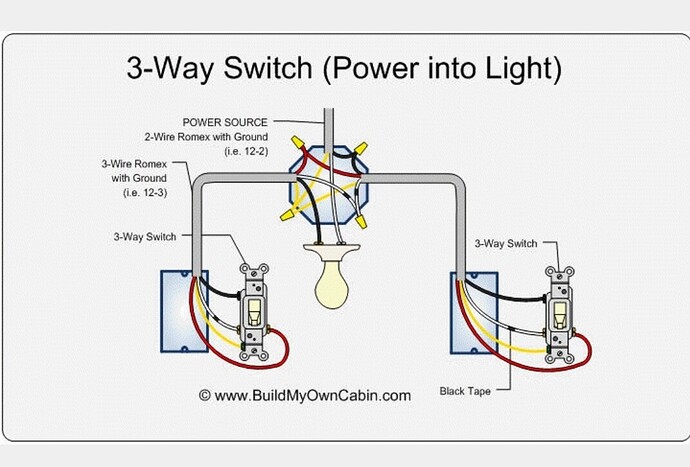 You will have to use a meter to test to confirm. In this configuration, a hot is sent from the light to one of the two switch boxes. Whichever box gets this hot first will be the primary box and the box in which the Inovelli is located as a non-neutral.

More than likely, that hot will be the black wire attached to the black screw in one of the switches. Using a meter, test between the black conductor removed from the switch and the bare copper ground. Whichever box has a constant 120V will be the primary box into which the Inovelli goes.

Separately, one of the boxes has a 2-wire Romex not connected to anything with electrical tape over the ends. I am guessing that this is a leftover from the prior installation. Hopefully, that Romex is not hot but I would test to ensure that is the case. If for some strange reason it is hot it may offer a wiring variation.

Thanks for the detailed response. Would I need a aux switch also to get full scene /multi tap control. And do I have to wire the main non neutral Smart switch and or aux switch any special way or is it just in the instructions that would be with the non neutral inovelli Smart switch.

Yes to both. You are going to need an Aux switch due to the wiring complexity. You will need the to-be-released Blue series for the multi-tap support on the Aux, as the Red series does not support that.

You are also going to have to re-wire at the light box where the switched hot is returned. (The other light box will be already be wired in parallel to that.) I’ll see if I can dig up a wiring diagram, as it won’t be in the standard schematics distributed by Inovelli.

He does have a power to the light situation, but it’s not that diagram. So that solution won’t work. @dc77 has a single 3-wire to each box. That means that power is to the light, but there is no Romex connection between the boxes. Instead, there is one 3-wire from the light box to each switch but nothing between the switches. From what @dc77 described, this diagram is correct: [image] There is a way to wire this, but unfortunately, it involves re-wiring at the light. From the light box…

Thanks for the help. Also will I need to purchase a bypass and install it?

will I need to purchase a bypass

That depends upon your load. If they are LEDs and draw minimal power, then probably. The general rule is if the load exceeds 25W then you won’t need one, but that does not always hold true. I would buy one just in case.

If that 2-wire is hot, this may change things.