3-way with Neutral in one box?

I’ve made great progress on swapping over to Inovelli switches, including in a 2-way non-neutral situation. I’m left one with pesky place I really want automation: my garage overhead lighting.

The box by the door into the house doesn’t have a neutral in it.

The box by the door to the backyard does, courtesy of another switch that controls an outside light.

I’m fine if the smart switch goes by the door to the backyard. What’s the way to wire this up? Is it possible to wire the Inovelli switch with the neutral that’s available, and use the GE add-on switch somehow with non-neutral in the other?

Looking at https://support.inovelli.com/portal/kb/articles/inovelli-wiring-diagrams-dimmer-switches-gen-2, I guess I can just follow the 3-way non-neutral wiring diagram but take advantage of the neutral I do have, which would allow me to use an on/off instead of dimmer?

To answer your second question about just stealing a neutral, probably not. Let’s figure out what you have first and go from there.

Ok. I’ll take a picture of the box later today, it’s… a mess

Might wind up just being a non-neutral 3-way, which would also be ok. There’s plenty of load (4x 8’ fluorescent lights).

Both boxes please. and with the switches pulled as far out as they will go so that we can clearly see into the boxes as well

Here’s one box. The switch on the left controls an outside light and I’ve had in place for something like 3 years. The switch on the right is the garage light I want to replace. Killing power to a single-pole breaker in my panel kills power to both. Ignore any labels you see, that was me attempting last week try and make sense of what’s what and they may not be correct.

Here’s the other end. There is another switch in this box but it’s on a totally different circuit and doesn’t have a neutral either. There are no other wires hiding in this box, everything that comes into the box is connected to the 3-way switch. 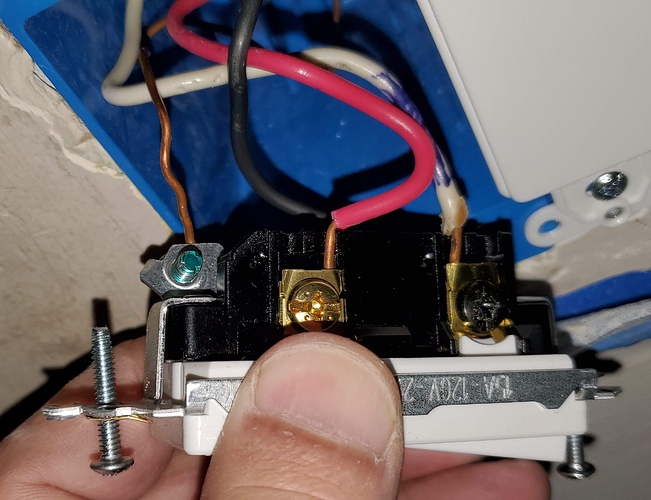 I need better pictures of the double box. Pull those two wire nutted bundles out too. As is, I can’t see the connections. Pictures of the switch would be helpful too. I need to see what is wired to which terminal.

Thanks. Better but I’m going to have you tell me what things are connected to.

There is a black conductor connected to the BLACK connection on the switch. Where does that go? I see it going to the back of the box but lose it in that mess. That will either be a 2-wire (Black/White) or a 3-wire. Which is it and where are the other conductors to that Romex connected.

Yeah the box is a disaster. I’ll try and explain with text. Left/right is looking at the switch front head-on.

Ground - to ground bundle in the box with everything else
Black - to bottom right black terminal on switch. Goes out of the box, not connected to anything else in the box
Neutral - in to a massive wire nut with every other neutral in the box

Thanks, I’ll take a look. Let’s call a white a white. It may or may not be a neutral.

Black - to bottom right black terminal on switch. Goes out of the box, not connected to anything else in the box
White - in to a massive wire nut with every other neutral in the box

In the 2-Gang box, disconnect the Black from the 2-wire that is connected to the Black screw (backstab). Using a meter, test between that unconnected connector and the white bundle (just unscrew the cap) to see if you have a constant 120V. Test with the other switch in both positions.

Using a meter, test between that unconnected connector and the white bundle

I got 0 volts between the bottom black wire (2-wire) and the white bundle, regardless of the position of the other switch.

I get 120v between the top black wire (3-wire) and the white bundle, which changes to 34v based on position of the other switch.

I get 120v between the red wire (3-wire) and the white bundle, which changes to 34v based on the position of the other switch.

How many Romex in the other box? It looks like just one 3-wire. (Pertaining to the switch for these lights.)

Doesn’t make any sense to me. Go back to the 2-gang box. The white from the 3-wire. You said it it was connected to the big bundle of whites. Please double-check. Pull on it to make sure you know where it goes. It looks to me like it is connected somewhere else. If it is, that would make more sense.

Also, it looks like that white wire may have black paint on it. Is that right? 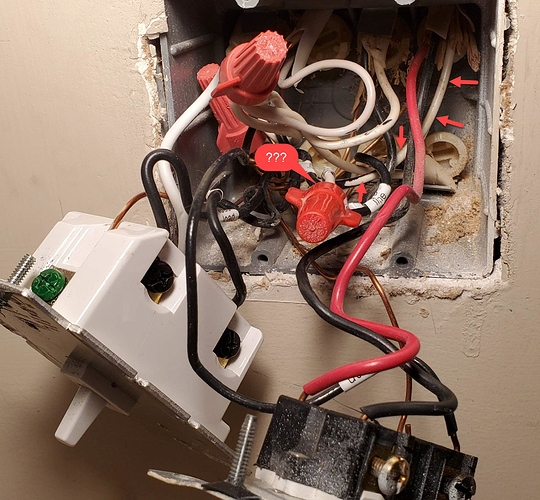 You’re right. I screwed it up. To make things clearer here’s a video tour of this good fun: https://photos.app.goo.gl/d4p24B63NdWPX7tZ6.

Ground - to ground bundle in the box with everything else
Black - to bottom right black terminal on switch. Goes out of the box, not connected to anything else in the box
Neutral - in to a massive wire nut with every other neutral in the box

Ok, that makes more sense. Please confirm this: In the 2-gang box, take the caps off that bundle with the blacks and the single white wire and measure between that bundle and the bundle of all whites. You should have a constant 120V. Test with the other switch in both positions.

Confirmed! 120v regardless of the other switch position between the black+one white bundle and the all white bundle.

Thanks for the video. That helps confirm your configuration. Here is what you have.

This is a typical line and load in the 2-gang box we’ve been focusing on. The Inovelli will go here, and you have a neutral.

Just so you understand how it’s wired now, the hot for this switch leg originates in the box at the black bundle, The hot is sent over the white conductor of the 3-wire to the other switch. At the other switch, that white is connected to the black (common) terminal. The switched hot is then returned back to the other switch via one of the two travelers (black or red) depending on the position of that far switch.

The 2-gang box switch then sends the hot to the light(s) via the black and white 2-wire in that box. That black is connected to the common terminal of that switch and the white is bundled with a neutral.

Pigtail a white wire onto that bundle of all whites and connect to the Neutral terminal on the Inovelli.

Pigtail a black from the black hot bundle to the Line terminal on the Inovelli. Remove the white from the 3-wire from that bundle.

Connect the red and black from the 3-wire to the Load and Traveler terminals. It shouldn’t matter which goes to which.

Connect the black from the 2-wire going to the light and wire-nut it with the white in the three wire.

You’re following the graphic above, but swapping the black and white of the 3-wire. Or if it’s easier, wire exactly as in the graphic, but you have to swap the connections to the switch at the far box.

Wonderful, thank you so much! Since I have to put a switch in the other box too I’ll likely just swap the two wires at each end to keep myself sane and have a specific diagram to follow.

Just one follow-up question regarding this:

Pigtail a white wire onto that bundle of all whites and connect to the Neutral terminal on the Inovelli.

Since that white bundle is getting pretty massive, is it also ok to wire to neutral via the spare jab connection on the back of the other switch in the box?