I’ve wired my LZW30 in 4 way box load/lead and it looks just like the wiring diagram provided by Inovelli. Yet it won’t work.

So I swapped the switch in another working 3 way circuit (I’ve got 4 working perfectly), and it works perfectly. So it doesn’t look like a switch problem.
I reinstalled my old toggle 3 way switch into the 4 way circuit, and it worked perfectly.

I took the known working switch taken out of the above circuit and installed it into the 4 way. Didn’t work.

To reiterate, my setup looks just like the diagram for the 4 way in a box with line and power in the same box.

The only way to make the switch work in the circuit is to switch the black line wire and the white line wire. Then the switch will work if I have the other 2 switches off. If I flip one of the dumb switches, power is removed from the smart switch as “incorrectly” wired (white for black, black for white).

Please, any help would be appreciated.

Is this the diagram you are referring to? 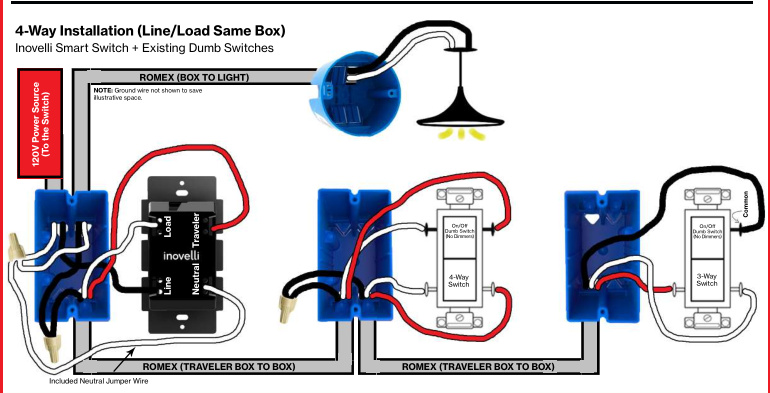 The only way to make the switch work in the circuit is to switch the black line wire and the white line wire.

Can you tell us how you switched the black and white line wires?

Yes, that’s it.
I switched the black and white at the Inovelli only.

I have a feeling what’s going on but I think it’s best for you do to a quik test before sending you in a wrong direction.

What does the LED on the dimmer do?

John, my switch is an on/off switch. Should I still do the procedure you suggested?
Thanks

I decided to do it anyway. The LED did nothing.

Except I didn’t understand how to cap the black wire and connect it at the same time.

Yes, it is valid with the ON/OFF.

The black wire from the lamp should not be connected to anything… i.e. capped or taped etc.

Only two wires should be connected. Both from the line to the on/off switch Line - Neutral.

If you get no response from the LED (on the switch)

Repeat but this time only connect the black and white wires from the bulb to the dimmer Line and neutral. No other wires.

Sorry, company coming. Will try ASAP.
Thanks for your continued help.
Bruce

No worries… enjoy your company.

Company’s gone. I don’t know which wire goes to the bulb. I’ve uploaded a picture of my box There’s 3 switches in it, so maybe you can point out which wire is going to the bulb.
Thanks, Bruce 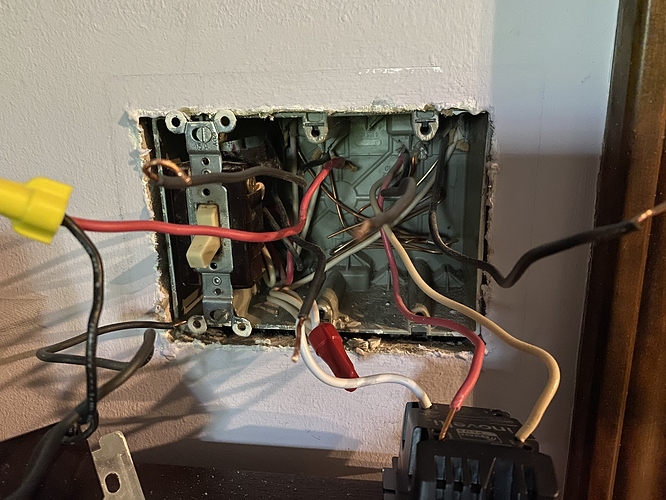 From this box it would seem the right hand black is the bulb and the unconnected black in the middle of the photo is power.

But its like the three blind men checking out an elephant…

Questions:
To which wires did you connect the working 3dumb 3-way? also identify the wire that went to the black screw on the 3way.

Is the red wire currently going to the inovelli connected securely? Or is it just a long stripped length?

Remove from the Inovelli the white and red coming from the 2nd cable from the right.

You may need a 2nd person to either watch the LED or operate the breaker because I believe the LEDs will go on for a period of time then go off.
Connect the black on the right to the inovelli Line. careful not to allow the other wires to touch anything, turn on breaker and observe the led on the inovelli.

Breaker off;
Swap the black wire going to the inovelli with the black in the middle of your photo.

Again turn on the breaker and observe the inovelli LED’s

The black wire in the middle cause the led to flash red then blue then off.

I didn’t change and wiring on the 2 dumb switches. The red was not connected,
The black wire that went on the 3 way was on the right I think.

I couldn’t wait, so I attached the red and white wires, and it’s working. Thanks for our help.

There was no reason to wait. I think once you realized which black was which you were good to go.

BTW thank for reporting back.

That was the good news. The fan and ceiling lights that are on the same circuit are now not working. Would changing the line to the inovelli have done that?

Okay, sorry about all the messages.

When I turn the inovelli on, the fan and ceiling lights go on.

OK so backup up a minute.

Is there still a problem? If so pls explain.