4-Way with no Neutral

Probably been discussed before but a little confused if the Black Series Dimmer can be installed in a 4-way configuration without a neutral in any of the boxes.

I believe the power comes from the light to the boxes not the other way around.

The first box has the live on the two white wires nutted off in the back of the box and the two black and red ones are dead.

Third box is black red and white with white hot.

Possibly if I disconnect the nutted white wires there would only be one hot wire. 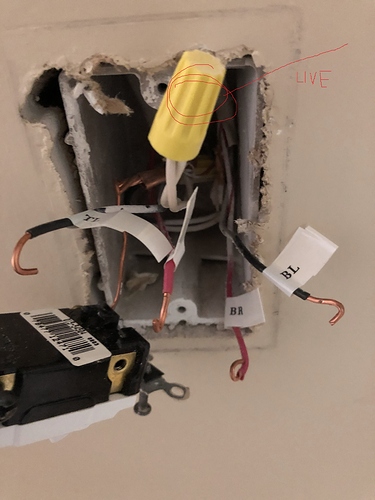 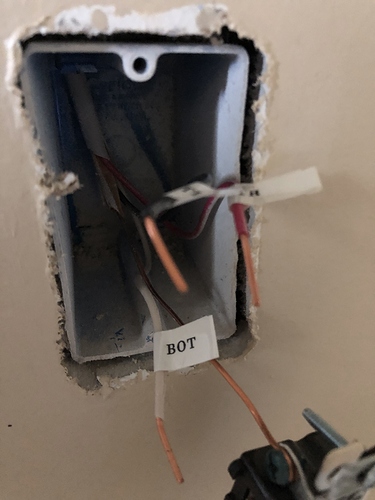 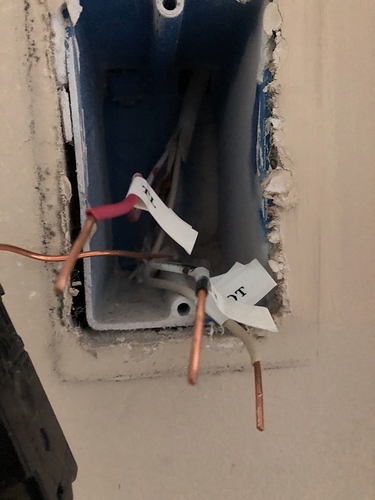 It definitely can be used, but you need AUX switches in the other spots since you’re in a non neutral setup.

I do have GE and Homeseer AUX switches but from all the wiring diagrams they show the AUX with traveler and neutral wired so not sure how those would be wired. Also at this point I can’t seem to get power to the Black Series switch.

OK so in that diagram the AUX has the traveler and the load in the neutral?

Thank you. I am thinking the first box might be the line with the nutted off white wires? When I get a chance I will remove and test again to see where the main line is. Obviously wire that to line and I assume wire the other one to line as well?

Just to confuse this a bit the wiring powers two lights one at each end of the hallway.

Just wonder why I got no power to the switch when wired to the other box with hot on the white, but as mention lets find proper line first?

So the picture with the 4 wires looks like the 4 way switch (dumb switch?). The Inovelli will NOT go here. You’ll need to follow the hot (capped whites?) to see which gang box it goes to. Then you’ll need to find load.

Then you’ll need to find load.

I think this is a little more complicated than it appears. I can’t tell for sure from the pics, but it looks like the non-neutral Line and the switch load is coming into the 4-way box. I’m saying that because at least from the pics, there is only a single 3-wire in each of the other boxes.

@dwright34 Am I correct? Is there a single 3-wire in each of the two boxes not containing the 4-way switch?

This is correct. Two of the boxes have a single 3 wire red white and black. The other has two red two black and two white. The white in this box is terminated with a wire cap and is hot. When all are disconnected from the switches the white in the box is hot and the white in the third box is hot.

That goes into another box with three wires and white is hot red not black not however when I put the Inovelli switch there it didn’t power up.

The other has two red two black and two white.

Ok, so as to not make my head hurt, here is the terminology. A single sheathed cable is Romex. Ignoring the bare copper ground, the Romex is either a 2-wire (black and white) or a 3-wire (black, red, white).

Labeling your boxes A, B and C, the 4-way is B. A as you’re generally facing your switches is on the left and C is on the right.

So confirming that there is a single 3-wire Romex in A and C, right?

With everything disconnected including the capped off white wires I onlyhave one line, hot.

I understand your description perfectly. Non-neutral 4-ways are typically wired through a 3-way switch first, but that’s not to say this is incorrect. We just have to figure out the wiring schematic.

How many lights? Are you able to get up into and take a look at the box if hopefully it’s one? Or are these cans or something inaccessible. We need to find the load. It’s probably the black of the 3-wire with the hot white but I don’t like probably. I’m also unsure of what’s going on with the red.

When you determined that white bundle in the 4-way box was hot, did you use a meter and test between the bundle and the bare ground?

There are two lights one on each side of the hallway.

Yes on testing the one white reads 120V all other wires are dead after removing the nut.

I assume the red is the traveler.

Oh and I can’t get up to the box up in the attic but I may be able to take the fixtures off.

After digging around I just found another white and black pair of wires nutted off as well.

From your photos I would guess you have something very close to this:

You will have to use a non-neutral configuration (as you already know). And for my first thought you might have to use aux switches but it needs more thought.

Thank you, but possible?

Are you sure there isn’t another switch somewhere? I’m sure you know your house, but we have had people discover a switch they didn’t realize was there when the wiring didn’t seem correct. Not saying that’s the case here, but it’s possible. What’s troubling me is that there are only two 3-wires at the 4-way and one 3-wire at the 3-ways. One has to go to each 3-way. So where is the feed to/from the light?

The difference is after pretty much unwinding everything out of the box with power it turns out there is Two romex with (black, red, white) and one with just white and black.

The one with just white and black have the line, power on white and the black is attached to one of the other three wire romex.

There isn’t another box that I know of and maybe I don’t know my house lol. Oh what does this switch do?
.

OK here is some success.
I wired the white power to the line and took the black and white nutted off wire and put them in load.

The light now powers on with the switch and off.