My primary use case is scenes commands that are triggered by the inovelli or other devices, which trigger home assistant scenes, which set the brightness of devices in the scene.

If on home assistant, you will be able to use “transition” soon ™ for applying brightness changes and scenes. Via Zwave JS.

## Proposed change <!-- Describe the big picture of your changes here to com…municate to the maintainers why we should accept this pull request. If it fixes a bug or resolves a feature request, be sure to link to that issue in the additional information section. --> Add transition support to zwave_js lights ## Type of change <!-- What type of change does your PR introduce to Home Assistant? NOTE: Please, check only 1! box! If your PR requires multiple boxes to be checked, you'll most likely need to split it into multiple PRs. This makes things easier and faster to code review. --> - [ ] Dependency upgrade - [ ] Bugfix (non-breaking change which fixes an issue) - [ ] New integration (thank you!) - [x] New feature (which adds functionality to an existing integration) - [ ] Breaking change (fix/feature causing existing functionality to break) - [ ] Code quality improvements to existing code or addition of tests ## Additional information <!-- Details are important, and help maintainers processing your PR. Please be sure to fill out additional details, if applicable. --> - This PR fixes or closes issue: fixes #46234 fixes #48470 - This PR is related to issue: n/a - Link to documentation pull request: n/a ## Checklist <!-- Put an `x` in the boxes that apply. You can also fill these out after creating the PR. If you're unsure about any of them, don't hesitate to ask. We're here to help! This is simply a reminder of what we are going to look for before merging your code. --> - [x] The code change is tested and works locally. - [x] Local tests pass. **Your PR cannot be merged unless tests pass** - [x] There is no commented out code in this PR. - [x] I have followed the [development checklist][dev-checklist] - [x] The code has been formatted using Black (`black --fast homeassistant tests`) - [x] Tests have been added to verify that the new code works. If user exposed functionality or configuration variables are added/changed: - [ ] Documentation added/updated for [www.home-assistant.io][docs-repository] If the code communicates with devices, web services, or third-party tools: - [ ] The [manifest file][manifest-docs] has all fields filled out correctly. Updated and included derived files by running: `python3 -m script.hassfest`. - [ ] New or updated dependencies have been added to `requirements_all.txt`. Updated by running `python3 -m script.gen_requirements_all`. - [ ] Untested files have been added to `.coveragerc`. The integration reached or maintains the following [Integration Quality Scale][quality-scale]: <!-- The Integration Quality Scale scores an integration on the code quality and user experience. Each level of the quality scale consists of a list of requirements. We highly recommend getting your integration scored! --> - [ ] No score or internal - [ ] 🥈 Silver - [ ] 🥇 Gold - [ ] 🏆 Platinum <!-- This project is very active and we have a high turnover of pull requests. Unfortunately, the number of incoming pull requests is higher than what our reviewers can review and merge so there is a long backlog of pull requests waiting for review. You can help here! By reviewing another pull request, you will help raise the code quality of that pull request and the final review will be faster. This way the general pace of pull request reviews will go up and your wait time will go down. When picking a pull request to review, try to choose one that hasn't yet been reviewed. Thanks for helping out! --> To help with the load of incoming pull requests: - [ ] I have reviewed two other [open pull requests][prs] in this repository. [prs]: https://github.com/home-assistant/core/pulls?q=is%3Aopen+is%3Apr+-author%3A%40me+-draft%3Atrue+-label%3Awaiting-for-upstream+sort%3Acreated-desc+review%3Anone <!-- Thank you for contributing <3 Below, some useful links you could explore: --> [dev-checklist]: https://developers.home-assistant.io/docs/en/development_checklist.html [manifest-docs]: https://developers.home-assistant.io/docs/en/creating_integration_manifest.html [quality-scale]: https://developers.home-assistant.io/docs/en/next/integration_quality_scale_index.html [docs-repository]: https://github.com/home-assistant/home-assistant.io

I appreciate the reply. Unfortunately doing from home assistant also has the problem of being a duration and not a rate

I would love the ability to set a brightness ramp rate instead, either with “brightness per time” or “time for full change”

I may be misunderstanding you, but ‘brighness per time’ already exists in the zwave multiLevelSet(value,duration) command and Inovelli dimmers support it.

The specifics of how to do it depend on your automation platform, but basically when you tell it to ‘dim to 75%’ you would also include an optional duration value. The factory default setting for Parameter 1 (default dimming speed) is 3 seconds. If the load is at 100% and you send a setLevel(75) command, it will take 3 seconds to dim from 100 to 75. If you want to override that you send a setLevel(75,1) and then it will take 1 second to dim from 100 to 75 instead of the default 3 seconds. If you send a duration of 0 it will jump immediately from 100 to 75.

I’m being picky so I’ll try to clarify

My first-world-problem being that turning from 0% to 10% (night light in a bunch of rooms) feels super slow and the dimming levels during the transition are noticeably quantized at low levels. Slow enough you’re not sure if you even triggered the scene. Because they’re just a brightness command and use the built in duration.

When dealing with duration in a command, then the automation side (HA for me) would have to calculate the current brightness, target brightness, then divide by rate to get the duration for each dimmer being set in the scene, which is not doable with a scene in HA.

@EricM_Inovelli – tagging you for reference

HA has scene transition. If properly specified, this should allow HA to automate level commands over a period of time to get from one brightness to another.\

To be clear, as far as I can tell, you are requesting a manufacturer to implement something that is outside of z-wave specifications (no, I didn’t read the entire spec), which is not an Inovelli issue but more of a command class issue with z-wave driver itself. Might have better luck getting something integrated with sigma designs.

as far as I can tell, you are requesting a manufacturer to implement something that is outside of z-wave specifications (no, I didn’t read the entire spec), which is not an Inovelli issue but more of a command class issue with z-wave driver itself.

I was thinking the same thing. Here are some extracts from the silabs z-wave design documnet 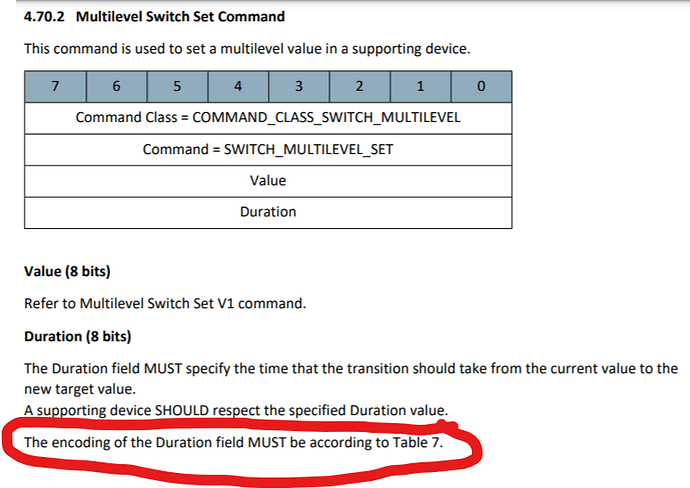 Again HA can only specify a single duration in a scene, and would take a lot of special handling to calculate a duration based on the current and target brightness for each dimmer. The simple way of setting up scenes in HA only saves the current device state. For example I have 4 scenes for my living room which contains 3 dimmers, the scenes corresponding to 0%, 10%, 60%, and 100%. I “activate” a scene which only sends brightness commands to the devices in that scene.

My proposal would be HA sends a brightness command with no spec for duration so using the 0xFF, so the dimmer would use its default. In current firmware the default is a dimming duration in seconds. With the option I’m proposing, the default could be set up on the dimmer to optionally use a rate of change instead if a duration is not specified in the command, so visually every transition happens at the same speed.

In other words, if a duration is not specified, it would scale so that a change smaller than 0 to 100% also scales the default duration.

Currently with the config parameters 1-4 the duration is spread across the dimming spectrum. So if it is set to 2 seconds and you change the level from 0-25% it should take .5 seconds. From 0-50% it should take 1 second, etc.

I think what you are noticing may be a minimum level that can be bumped up or a quirk with LED bulbs. The “quirk” is that many LED bulbs do not turn on until they reach x%, but once they are on you can dim them down to <x%. So if you start at 0% and increment the dimmer up 1% until the bulb turns on, this can give you your minimum level. If you start at 50% and increment down, the level will likely be lower than what the minimum level needs to be because of the quirk.