Also having a 3-way issue

I have one of the 2nd gen switches (black version). I saw that these should work with pretty much any 3-way wiring when using a dumb switch so I figured I would finally be in luck. Unfortunately it seems like I’m having an issue.

I wired it according to the below

My wiring prior to installing the switch (when using dumb switches) is (I believe) as follows
…see below. I guess since I’m a new user I can only put 1 pic in a post

Unfortunately it’s not working. There’s two lighting appliances on the circuit. Initially one has 3 LED candelabra style lights. The other has two CFLs. When switching, the lights just blink to full brightness
, then dim, over and over while the relay on the smart switch looks like it’s resetting itself. The LED on the switch cycles from blue to green to red and back. I swapped the CFLs for LEDs and I’m seeing the same problem. These 3 ways are the only thing keeping me from replacing all my switches.

What I believe my original wiring is. 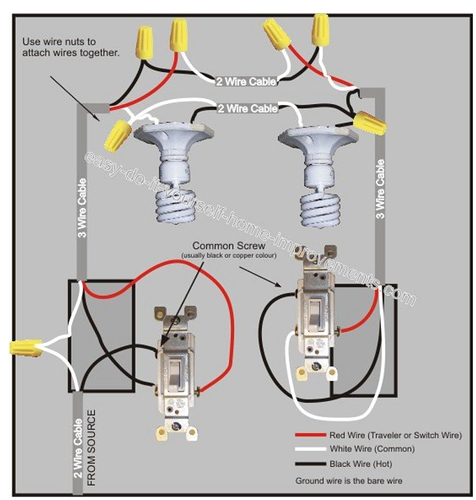 @CLesto - let me wire up something similar tomorrow to see if I can get the same result.

It’s tricky with 3-Way scenarios to diagnose the issue remotely and unfortunately, I’m not an electrician, so I’m likely limited in what I can do.

We tested all the scenarios shown in the PDF to work, but I have not tried this one in particular. In theory the switches MCU should sense the traveler change, so I’m not entirely sure what’s happening here.

@harjms - do you think yours is like this too? I’m not sure if you have access to the load wires at the ceiling, but this is a tad different than what I tested.

Either way, we got your PM around the multimeter findings so hopefully we’ll have an answer soon. @EricM_Inovelli is at the Z-Wave Summit until Saturday, so his response may be delayed.

Hang in there guys and thanks for the detailed descriptions, they really do help!

@Eric_Inovelli - I do not believe so and here is why:

I traced the cables from the dumb switch to the load. The wires coming from the under cabinet lights is a 14-2 into the gang box. Also, the original switch would’ve been wired with WHT as shown in the 2nd image. I have two (2) BLK and one (1) RED connected. Thus, if wired as above, it would’ve required a 14-3 and I’d only have one BLK, one RED, and one WHT connected to the current dumb switch.

Also, I took an image last year from when I swapped out the garage lights. It was only a 14-2 coming from the source and a 14-2 going to the next light on the opposite side of the garage. (see attached photo). 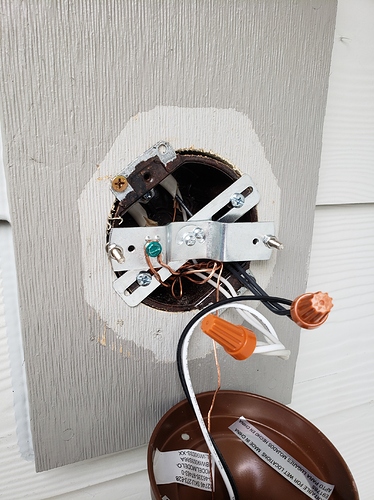 Let me know if you need any other voltage checks.

Must be nice to be at a “summit” @EricM_Inovelli.
-James

I wish I were an electrician. I also wish it were easy to trace the wiring but on the first light it’s a chandelier that hangs from a vaulted ceiling over my stairs. It’s just in a spot that’s really difficult to reach because as it is, it’s about 10+ feet above the floor, and then over the stairs so I can’t even put a regular ladder in place to reach the top. The second light is a different story. That one I can reach. I have a multi-meter but I’ve never taken readings from AC and I know there’s some tricks that need to be done to do it right, at least while the power is on.

I’m just hoping I didn’t mess up the switch. I have two more switches but obviously I’m not willing to try the others. I might check out my second 3-way. It’s just two switches and a single light… It’ll be a lot easier to check the wiring as it’s all within reach.

Lol me too - I feel so helpless trying to help you guys. I know the basics about electrical, but that’s about it.

We are looking into hiring a contractor or someone who can help with electrical, but it’s going to be at least a month or so to get them up to speed with things.

Keep me posted on the other three way. I’ll work on trying to mimic the issue of your first one tomorrow for sure.

Well so much for thinking that was going to be easier. That switch shares a box with 2 other switches. One for the recessed lights, one for a single outlet on a double outlet wall socket, and then the 3-way for the stair lighting. I honestly couldn’t even begin to explain how everything is hooked up. I’d have to take a picture and send it in with the switches pulled away from the box. It’s rather confusing. That and I broke the original 3 way switch. The plastic just crumbled in my hands when trying to remove one of the wires. So I guess I’m off to the home improvement store to grab another.

@CLesto - One thing you may be able to help determine is if the load is looped around the incoming line. See 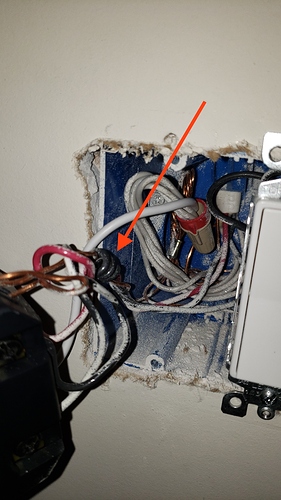 Otherwise, you could remove the light fixture and see what type of connections you have inside the light gang box.

@harjms I wish it would be that easy. So one thing I expected to see and one thing I didn’t expect to see. I saw one bundle of wires tied together, which were all neutral. I completely expected to see that. What I didn’t expect to see were a bunch of black wires all tied together. I’m guessing those were all ties off of line/common. I’d have to take a closer look at it as I was pushed for time. But the wires going to the three way switch were black, white and red. Red was obvious, the black I THOUGHT was the line, but now I’m thinking it wasn’t. I’m starting to think that was the load and the white was Line/common. Anyways I’ll have to take a closer look and if I’m still confused I’ll take a pic.

Here’s the pic. The switch to the far right is the three way that controls light I’m trying to replace. 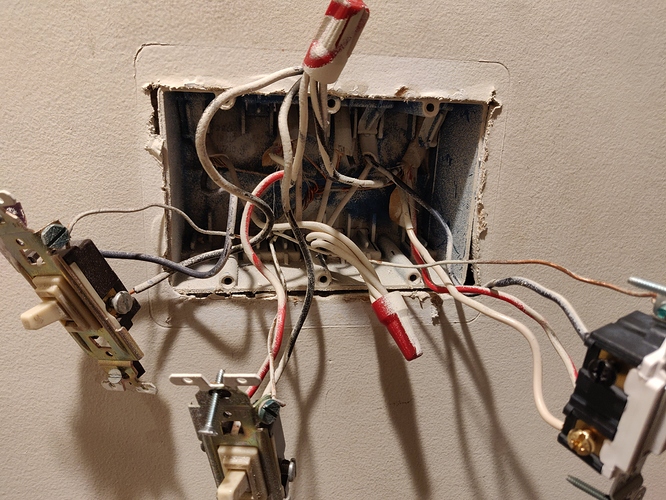 Hopefully it makes sense to someone, because it doesn’t make any sense to me.

Just looking at this quickly, here are my thoughts (not an electrician either, nor do I play one on TV).

The bundle of white is the neutrals all tied together. The bundle of black is the line (coming from panel) split out to your switches and or loads. This is common and mostly all my gangs are like this (bundled and just uses feeders). The first switch is using a hot from the bundle. Your second switch is using a hot from the bundle. Your switch you’re referring to (3rd switch) is not using this bundle of black as line. The hot from the bundle is actually going into the 14-3 that is connecting to your 3-way switch. I imagine it’s going to the light where it ties to your other switch or the load. The 14-2 (blk wire tied to your 3-way switch) looks like the common (load), but it doesn’t make sense to me. I’d have to look at the connection in the middle to help determine it. With that being said, It does look like they’re using the WHT/RED as a traveler pair. Got a pic of the other switch?

I don’t pretend I’m an electrician either. Honestly AC gives me the willies when it’s not horribly obvious what’s going on. I pretty much had a feeling about the line bundle. But when I saw the 3 way didn’t tie into that I was really confused.

I’ll see if I can get a pic of the other switch as well as the connections at the light tomorrow.

I think your switch (not pictured) should be the place where the Inovelli switch is installed. With pictures of the other switch, we can probably work it out. I’m still having issues with my 3-way working, so I’m hoping @Eric_Inovelli and @EricM_Inovelli can figure it out. I’m going to attempt to install another 3-way in the basement tomorrow to see if I’m running into the same issue.

Sadly I don’t think I’ll be able to put the switch in the opposite end of the circuit. Doesn’t look like there’s a neutral there. 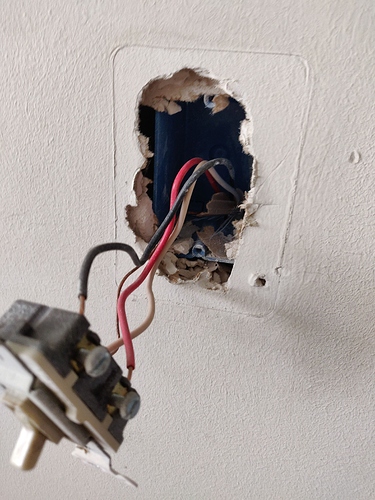 Mind is blown. The BLK looks like it’s coming from the LINE bundle, BUT there may be a wire change where the light fixture is installed. Best thing I can recommend is get a Klein electrical pen or use a multimeter and trace it out.

@harjms @Eric_Inovelli So after scouring the webs looking for 3 way wiring diagrams, I have a feeling my wiring (at least for the most recent 3 way I’m showing) is more like the below. I’m REALLY starting to hate the wiring in this house. 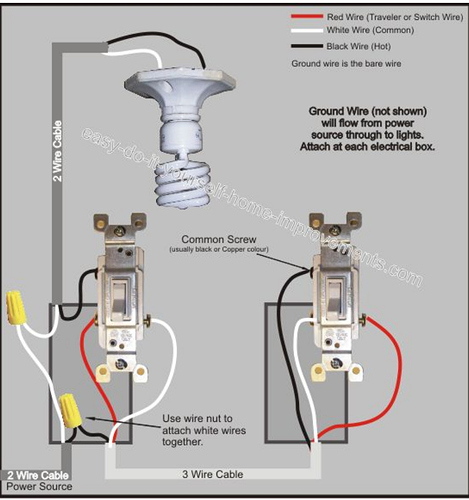 @CLesto - That one is a bit harder…I was almost going to say the far end, but then again, there’s not neutral available. You may have to use an Aux Switch on that circuit. Let me look at it some more and see if there’s something I can think of…

@CLesto If that is your wiring circuit then this diagram should work for you.

Notice that the load wire (black) is coming from box 2, connected via wire nut at box 1, and then goes up to the fixture.