I have what looks to be a mess. On one end I have a Lutron rotary dimmer and a standard switch on the other end running LED dimable ceiling lights (about 10 on each set).

When I took the old plates off to see what I had to work with, this is what I have. I didn’t want to proceed until I was sure where to go. But it looks like I need to be placing the dimmer on the end where the toggle switch is now? 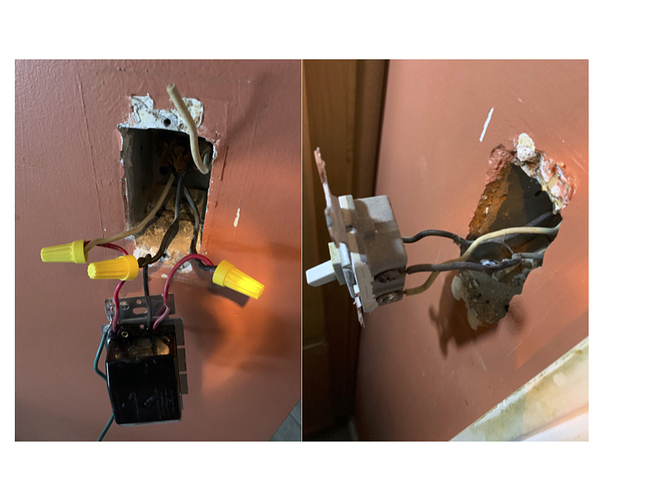 Hi, Welcome to the forum

Take heart, its not a mess, more like typical.

This is what I think you have: 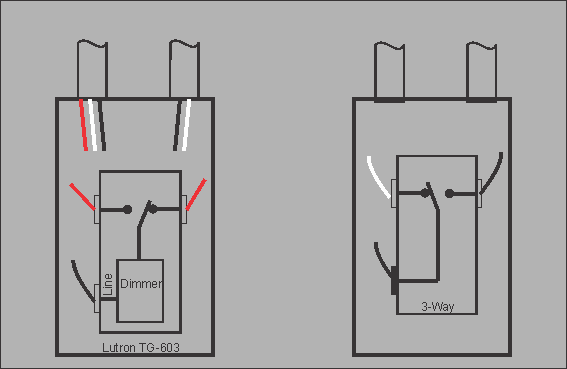 Could you draw the wires coming into each box? A pencil sketch is ok, use a dashed line for white and ignore the bare wires.

Thanks for your help. I uploaded the pictures before I understood what was going on. Not that I really know yet, but I see that the electrician that did this probably just “pigtailed” (is that a proper word

) the white wire to a red one probably because he was too lazy to do it proper and needed the added length. (EDIT: or they did this to note the typical red/white or stripe line and red wire that the house SHOULD have been, but had black coming in from the wall?)

So on the old rotary dimmer, there is a white wire coming out of the wall and it is going into the single hole on the bottom of the lutron. Then two black wires are inserted into the left “slot” of the dimmer. I have a white wire that is not terminated or connected to anything. 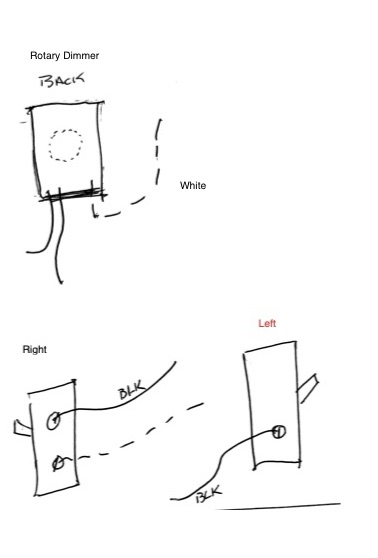 What’s really important here is the wires coming into the box, and what Romex cable they belong to.

I changed the background on my drawing to white, can you print it out and draw where all the wires go? 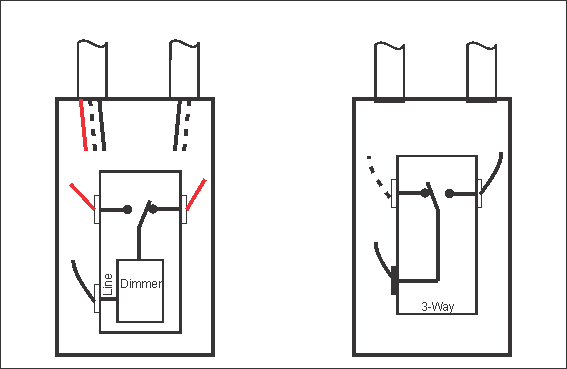 I tried, but on the dimmer diagram I’m not sure because the old rotary lutron dimmer switch doesn’t have any labels…but to explain the marked up diagram, BOTH the black wires coming from both sides of the romex are connected to the same ‘slot’ on the dimmer switch. The white wire - - - - coming in from the left side of the box connects to another smaller slot in the switch. (so I wasn’t sure how to draw the connection. 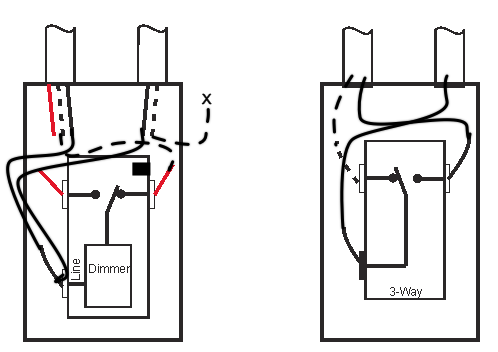 I don’t believe the diagram @JohnRob provided is going to be accurate. Although better pictures will help, it looks to me like the box with the dimmer has two 2-wire Romex in it, not a 2-wire and a 3-wire as might commonly be found. (I don’t see a red wire in the box and one of the whites is unused.) If that’s the case, then this suggests to me that 2 2-wire Romex were used as travelers and there is no constant power to that box.

Following on that logic, in the box with the toggle switch, there are 2 2-wire Romex. If I’m correct about the dimmer box, the one of those has to go to the light, which tells me you likely have power to the light first, which makes things difficult.

The best first step in diagnosing these three-way scenarios is to determine where your constant source of power is. Once you determine that then it’s easier to determine how to proceed.

From your markup @Bry was correct about no red wire.

I modified your markup (because I don’t like crossed wired) and added a white in the right hand box.

This is what I came up with, please check it against your wiring, especially the wire I marked “G”

Note the slots on the current dimmer are not the key to the wiring, the colors are. In that type of dimmer the power must come into the black wire. The two red wires are actually interchangeable and go to the remote 3-Way switch. 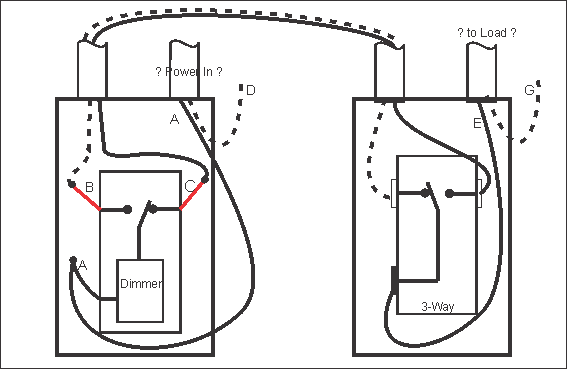 Assuming you are adding an Inovelli Red or Black, You could simply replace the current Lutron Rotary Dimmer with the Inovelli.

To do that you would:

With 10 lights connected to the dimmer you should have little trouble operating the Inovelli without a neutral wire. Be sure the total LED wattage does not exceed the Inovelli specification.

However if you are in a exploratory mood and have access to a multimeter, we can see if the wire D is a neutral wire and use it on the Inovelli to make it less dependent on the load characteristics to operate.

If nothing else, I can go forward with the Inovelli dimmer (black) and replace the old rotary dimmer! For this I am so appreciated of your help. (confirming yes, both the D and G have just been cut–no wire nut, etc. and hanging loose in the box)

I have a multimeter, but if you haven’t guessed it, I have no clue what I am doing. But I am curious and willing to try and gain the maximum benefits from the Inovelli.

OK great! We want to determine if wire D is a neutral wire. I.e. is it connected to the return buss in the fuse box.

A small aside:
Power comes from the “line” wire, most often its black.
Power returns through the Neutral wire, most often white
Without the return the energy cannot flow. Its kind like pushing up on something when your are floating in air. It ain’t gonna happen. However if you are standing on something (like the neutral) you can push something up.

Okay, breaker off. I have an old Micronta 22-212 in ohms mode, and the meter doesn’t budge a bit. The meter is working because I can touch two places on the box itself and it registers.

That would indicate either wire D is not neutral or the box is not grounded.

In any case you’ve done a great job and there’s not much more you can do. So button it up and enjoy yourself.

BTW Although I have an electrical background but I would have had to go through the same steps as you did and arrive at the same conclusion so don’t feel bad as you are learning.

This house has no ground

Built in 1956 and updated from time to time. The previous owner installed GFI outlets everywhere to pass inspection. Although I updated the panel to 200A when I bought the house, I had no idea what was behind the plaster walls!

So I have learned that my house is wired with 2-wire Romex without a ground.

I will finish up with my new Inovellis and be thankful for that! I will not go into the garage where the previous owner disconnected one end of the 3-way switch there for some reason. I won’t. I won’t…well, maybe next weekend…

Oops, guess I need a bit more help. With the Inovelli dimmer switch it looks like I don’t have 3-way any longer…unless the toggle switch is on, the dimmer doesn’t have power.

On the old dimmer switch I noticed that the wires destined for Line and Traveler were wired together? If I remove the C wire (traveler) I get the same result even when its disconnected. Should it also go into the Line screw on the Inovelli?

If I have the toggle switch flipped where the Inovelli gets power, the dimmer works to a point…so I guess the LED lights aren’t pulling enough and I’ll need to get a bypass or have an electrician run neutrals?

dimmer works to a point…

The issue with non-neutral and some low power LEDs is the LEDs never go off, there will always be a faint glow.
If you are seeing something else then let us know.

I’ll need to get a bypass or have an electrician run neutrals?
What would be great if the other end of the D wire can be found and determine if it could be a neutral. Actually it SHOULD be a neutral but it is what it is.

Is this an Inovelli Red or Black dimmer. The part number in your topic would suggest Black but just to be sure.

Its a black dimmer. When I toggle the power on the switch and get power to the Inovelli, I can turn the lights on…when I brighten them to a certain point, the Inovelli dimmer flashes red and the lights flash on/off.

So in summary, you removed the old rotary Lutron dimmer (which worked fine?)
Replace it with an Inovelli Black wired essentially the same way and not the inovelli is not working correctly.

Unfortunately I’ve not run into this issue, however the forum has a person with a similar issue here.

If you change the position of the dumb switch does it work the same?

Is it easy for you to change the LED bulbs (just for a test) the best would be some old incandescent bulbs.

I was wrong on the description of the lights…when I raise the dimmer up to full, the lights flicker/blink and after a few seconds of this, the Inovelli LED cycles through the colors (red green blue) and then powers off.

This is with the traveler wire disconnected or connected. Its like that wire isn’t doing anything.

I’m not sure what you mean by changing the position (of the dumb switch). Do you mean swapping the location of the two switches?

I’m not sure what you mean by changing the position (of the dumb switch). Do you mean swapping the location of the two switches?

No, I meant to actually flip the switch. Then see what happens. With the traveler disconnected the light should go off.

That is not what is expected. Can you make a quick chart of the house light and DImmer LED
for each combination

dimmer 3-way
on down
etc