Converting a 3-way back to a 2-way

So I’ve run into at least two situations (at my house with weird wiring to the garage and at my mother-in-law’s house with a weird fixture). Either way, it seems to me a lot easier to just close up one of the 3-way circuits and use a z-wave remote as the 3-way. Similar to lutron’s video: Caséta Wireless: How to Replace 3-Way Switches with Caséta Wireless Dimmers - YouTube

Do you have any recommendations for wiring the black series dimmer by closing up one of the 3-ways?

How you do it depends on your wiring configuration. Neutral or non-neutral? Line and load in the same box, line and load in separate boxes or light in the middle?

This is where it gets weird, and why I was hoping for a simple solution. In my garage, there is a gangbox with a romex for power (2 wires) , a romex for the light (2 wires) and a romex for the other switch… 2 wires… All old wiring. In the house, by the other switch, there is one romex being user… 3 new wires! So somewhere between the house and the garage, the romex went from 2 old wires to 3 new ones. Which is why I don’t want to wire anything too fancy. I want to just close one side off and use the other in a simple solution. I was hoping to use the one on the house with the newer wires, but who knows… The casetta video seemed to easy. I’m actually trying to replace my casetta with these dimmers, but 3 way switches in old houses are a nightmare for me.

That is strange. Normally, you’d have 2, 2 and 3. A 2-wire feeding power, a 2-wire feeding the light and a 3-wire to the other switch. I have no idea how a 3-way would work without 3 conductors going to the other switch. You need one conductor to send power to the far side, and 2 travelers to send the toggled hot back. If the load was in the far box, it’s doable with a companian romex (usually for receptacles), but that’s not what you have.

If you are sure that the feed and the light 2-wires are correct, then just wire those two Romex as a simple 2-way. That gets you the light in the garage but you probably want one in the house too.

What you’ll have to do is trace that third 2-wire mapping the two conductors in the garage to 2 of the 3 conductors in the house box. Since you don’t know where those are going, the best approach is to tone the wires.

If you’re not familiar with toning, its basically where you use a small device to place a “tone” on the conductor and then go look for it using a probe on the other end. YOU DO THIS WITH THE BREAKER OFF!

Or, you can wait for this:

@Courtney_Inovelli and I will be leading this project. Cut her some slack as this is the first one she’s taking on! Introduction As mentioned in the 2020 Product Roadmap this is one of the projects slated for 2020. In addition, this thread serves multiple purposes. Allows us to keep you updated on the project status (either good or bad) Allows you to participate and help us develop amazing products with you Enjoy each other’s company and have fun talking home automation How this initial…

The paddle remote is what I was thinking of. Maybe ill get it to replace the other one I’m thinking of now. However, how would you recommend I wire one of the gang boxes to set this up?

However, how would you recommend I wire one of the gang boxes to set this up?

Make sure that you fully understand the conductors in the garage box. As you said, it doesn’t quite make sense. It’s my experience that when that happens, you probably don’t fully understand the wiring scheme. When you have a line and load in the same box, it’s impossible for a 3-way to work unless you have a 3-wire going to the other box (and you say you don’t). If there is some way that could work, I’d love to see it. If you’re unsure, seek the help of an electrician.

That being said, you stated that you have a 2-wire line and a 2-wire load in the garage box. If that is truly the case, just wire it as a 2-way. Cap off the conductors to the other box. 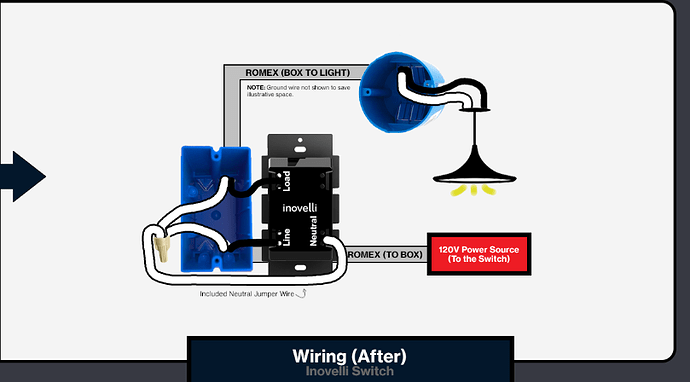 I can’t say strongly enough that if the wires aren’t making complete sense, you may not have what you think you have. If you’re not sure, get qualified help!