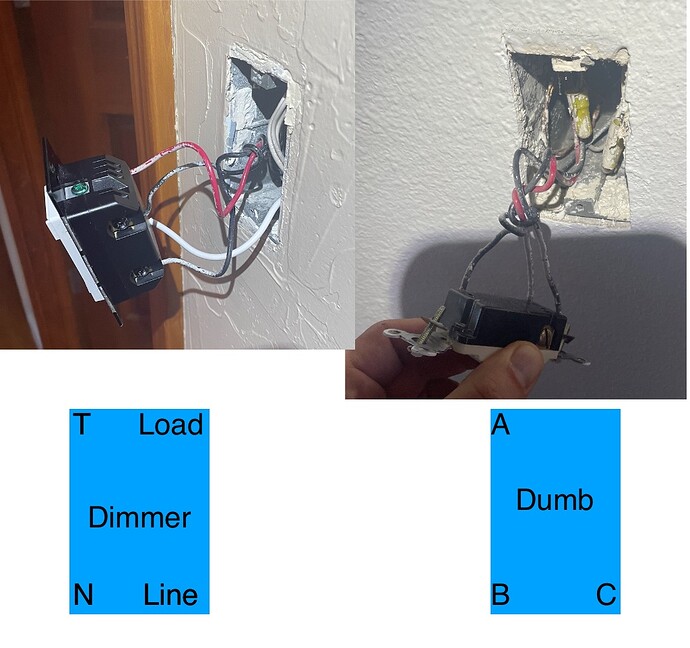 So I just replaced an old analog dimmer (which is attached to about 6 LEDs) with an inovelli switch and I’m having some issues.

As it stands the Dumb switch controls the lights on / off (only) and the inovelli is able to dim them “somewhat” (which makes me think I might need a bypass). I’m using Home Assistant and ZwaveJS to MQTT and use the interface there to change the various settings on the switch to try to get it to function properly.

What I did was try the combos of inovelli on/off and dumb switch on/off and take the voltage at all the different points to see if maybe I wired something wrong or if anybody can offer some help.

Red Dimmer On / Dumb On - LIGHTS ON

Red Dimmer On / Dumb Off - LIGHTS OFF

Red Dimmer Off / Dumb Off - LIGHTS OFF

So if anybody can offer some assistance I’d be real appreciative. I’m not super smart about wiring (obviously) but I’m hoping there is enough info here to make some progress.

Here is what I currently have set in ZwaveJS/MQTT: 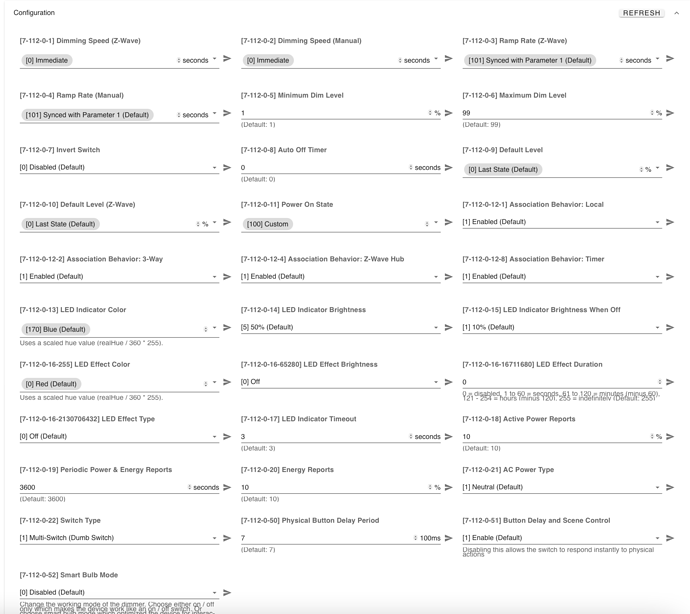 Oh-> Also there was no neutral in the mix before hand. I found one in the wall and wired it in

Do you have pictures of how the original dimmer was wired before you replaced it with the Inovelli? 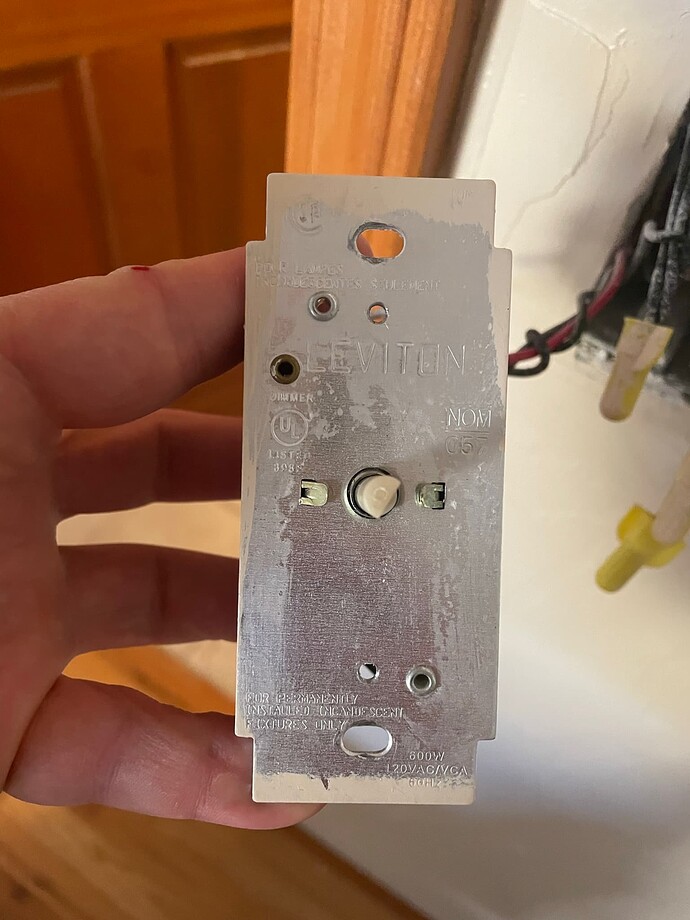 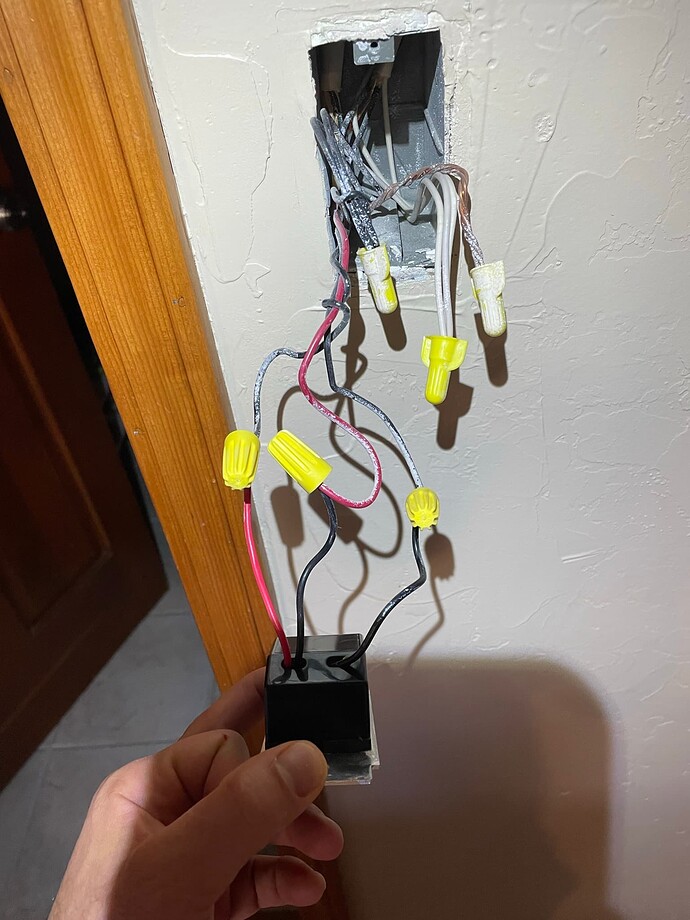 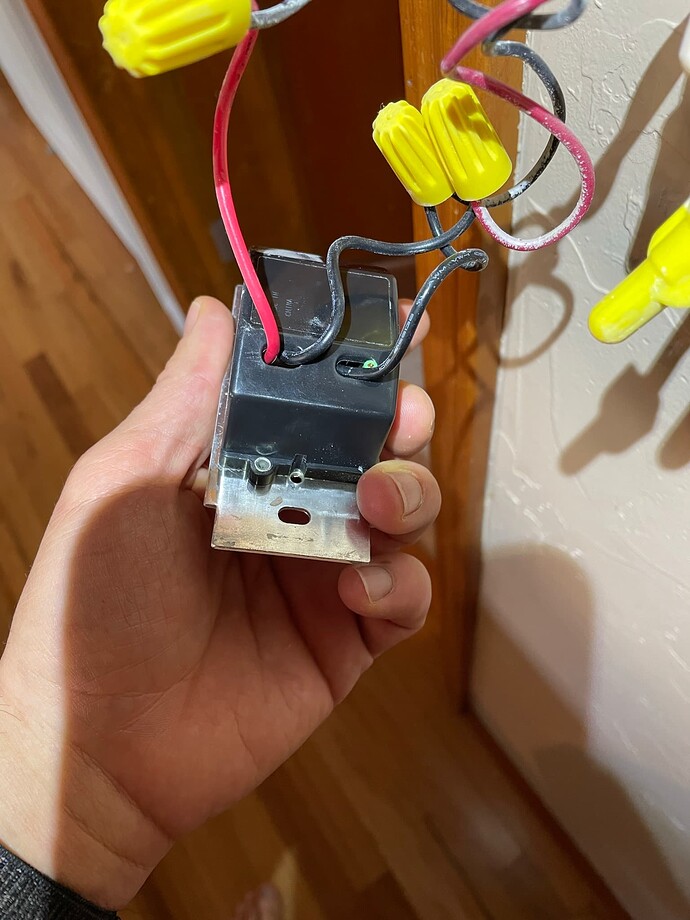 Ok, thx. So we’ll call that last pic in the middle the “Left” box, the one close to the moulding.

Now the other box. Same thing with everything pulled out. 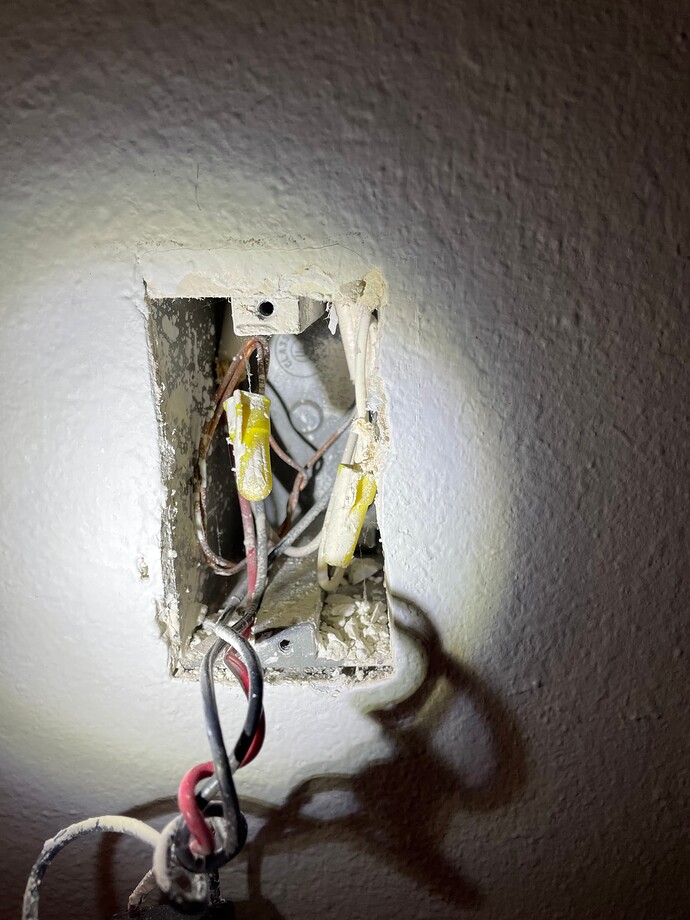 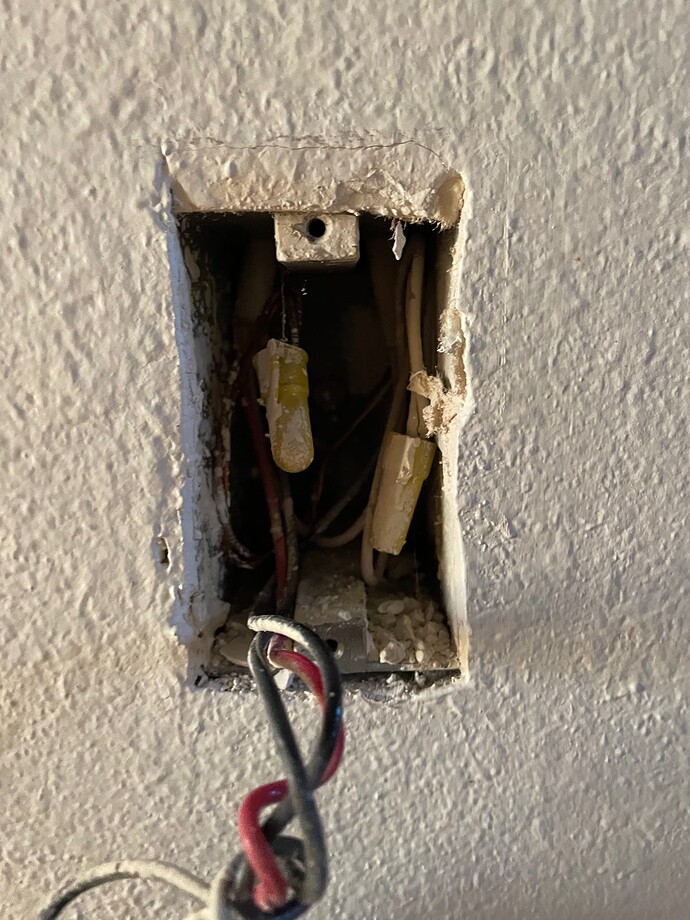 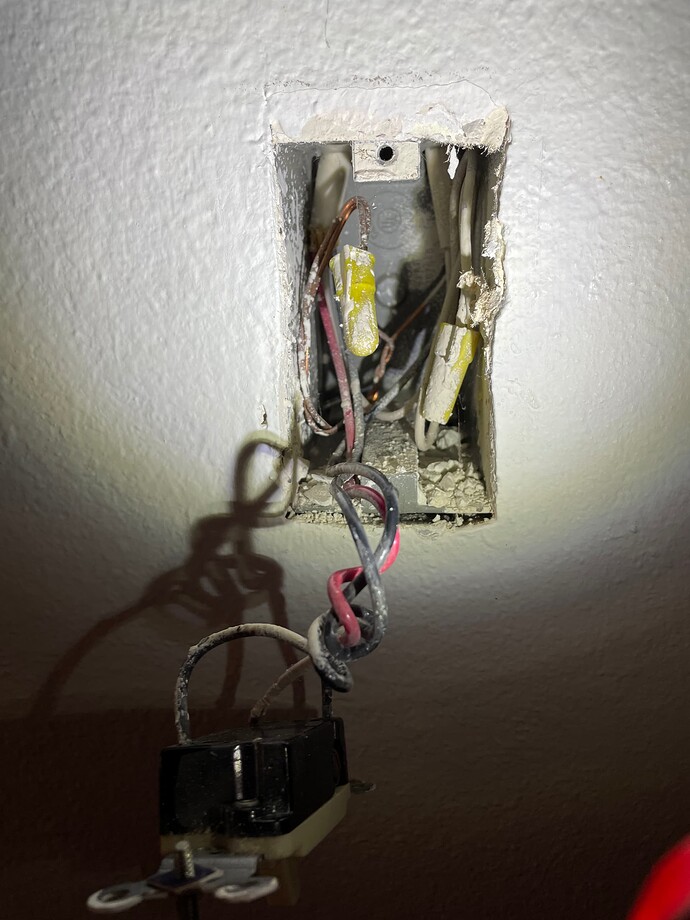 Here is the dumb switch box. Sorry I’m doing this on my phone.

So in the “right” dumb switch box, how many Romexs are coming into the box? I see a 3-wire at the top left, which will be from the other switch. But in the top right, which I can’t see well since they’re not pulled out, it looks like two 2-wire Romexs? Is that correct?

I would ordinarily expect to see one, not two 2-wires. What are these switches controlling? Are there lights in two locations? 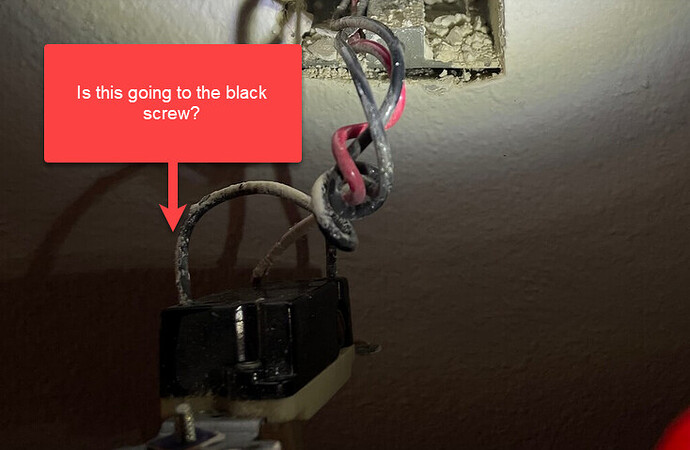 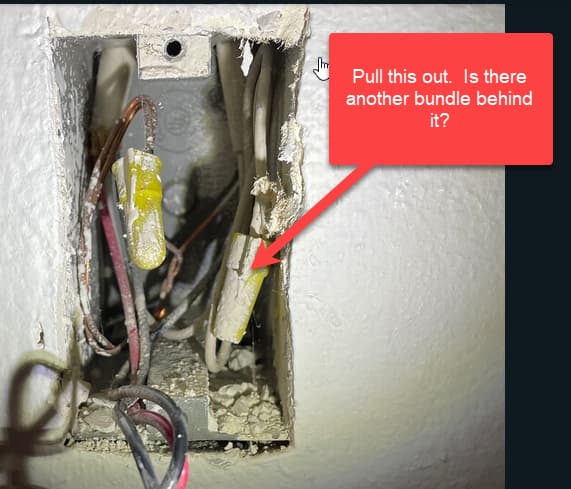 I’ll get a “correct” set of pics out shortly

Oh-> Also there was no neutral in the mix before hand. I found one in the wall and wired it in

Was this neutral from the same circuit?

Was this neutral from the same circuit?

I think he means he grabbed it from the neutral bundle in the box. I thought the same thing at first.

Ok I’m sitting at my computer and I think I took some better pictures (I think).

I put everything back together again. And here are some annotated pictures.

The Left Switch which is the existing 600W incandescent only dimmer is shown here. 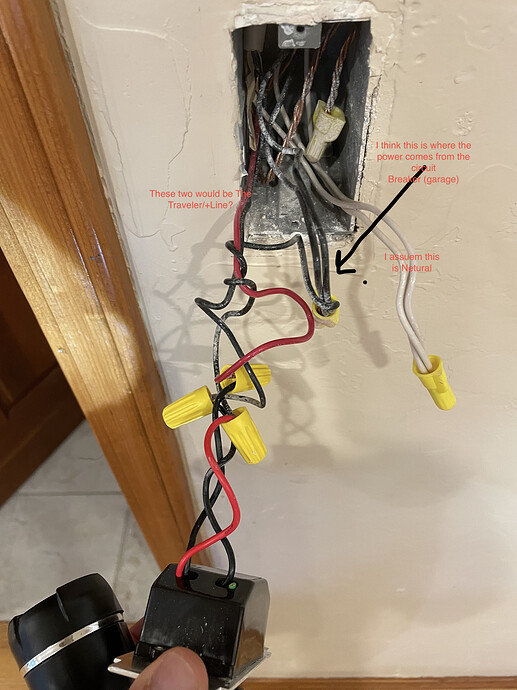 Inside the box are two bundles of wires/Romex/Something

The right one (which I think comes from the garage) 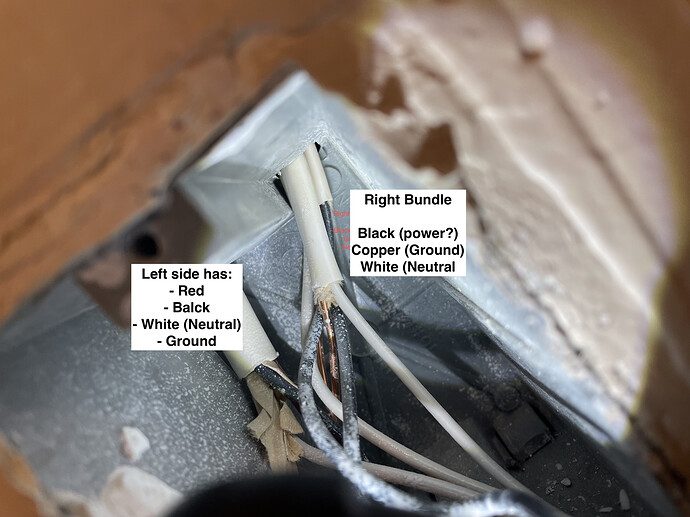 This is the switch I wanted to put inovelli in.’ 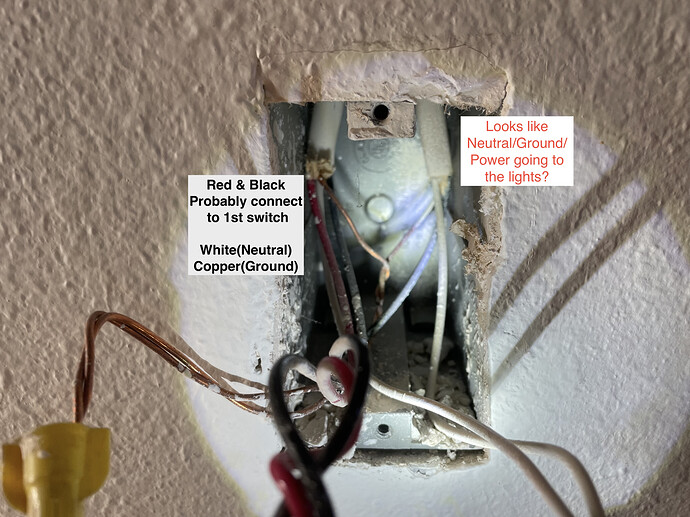 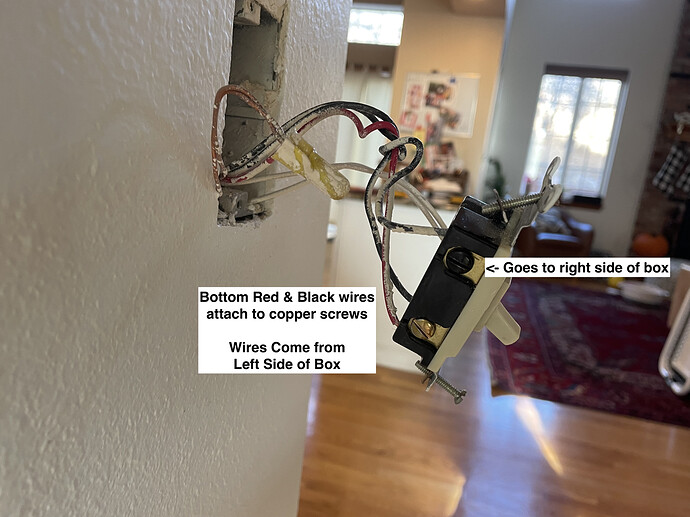 I tried to write a diagram of what I think I’m seeing here.

I mean off hand it looks right. Have you tried configuring the switch locally instead of through HA? Bypass is probably necessary for sure.

The first box, the BLK line, is it coming out of the same Romex as the WHT neutral bundle you suspect? I see two ROmex. I assume one is going to an outlet.

I’m unaware of any outlets on the same circuit - but I guess I could pull the breaker and go poking around.

I’m confused about why I need a bypass because there are 7 LEDs on the circuit. Its incandescent CAN’s retrofitted into LEDs…

Some LEDs regardless of wattage will sometimes require a bypass if you notice dim lights from the fixture if the switch is off. Not always but sometimes. Now if I’m reading your sentence correctly you installed incandescent lights in the LED can? Or LEDs retrofit into older incandescent cans?

Looks fine to me too. I thought I saw 2 2-wires in the dumb switch box, but with the extended I see that’s not the case.

Looks to be a straightforward line/load in separate boxes.

So looking at the wiring diagram that I think meets what I have - looks like I actually need to change how the black wire in the 1st box is wired.

Am I reading that correctly? If that’s the case I may need to change how all the wires are spliced together in the existing dimmer box.

(unless I read this wrong)

Am I reading that correctly?

Incorrect drawing. You have this: