Does Inovelli LZW31work with Line to Light?

Hi, I have a Black Series LZW31 Dimmer switches which I set up to be a 4 way setup controlling my foyer lights. I have the Inovelli switch by my entrance door. A “dumb 3 way switch” upstairs and a “dumb 4 way switch” in the hall by the foyer. I was helped by a user on here and I think my line goes to my light and no neutral for it (The diagram below looks exactly like my setup) And the pic below that is the first box where the Inovelli is. In that box is also a switch for outside light on the left and switch for my upstairs light on the right. There are Three 2-wire Romex to the outside light single pole switch with all the neutrals connected. Not sure if those neutrals can be leveraged.

Bottom line, based on that diagram of my setup, since the line/load in same box and line/ load in seperate box setup won’t work for me is there any way to get it to work with a non neutral Line to light as in the diagram? I’d like to know for sure before getting an electrician or buying another smart switch. Thanks!

No diagram was attached.

Oops sorry. Here they are. 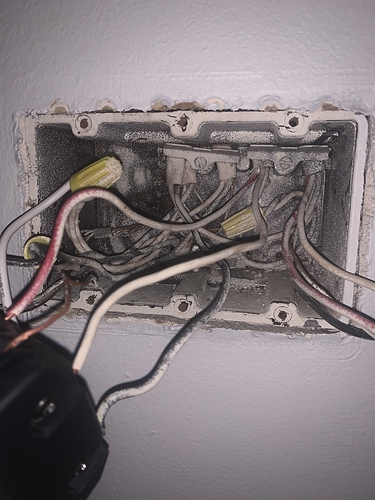 Double-post. Something wrong with the first one?

So that is something that you should discuss with your electrician. You may have a line w/neutral in your box unrelated at this point to the switch leg you are working on. (The bundles of blacks/whites suggests that.) So the question to your electrician is can you re-map the 4-way leg so that the line originates in the box as opposed to at the light. This would involve locating the where the line is connected to the lights and properly terminating that connection so that the line is no long…

I think we got as far as we could. I’d just like to know if my 4 way setup works with Inovelli at all as it’s not a line/load in same box or line/load in seperate box as you mentioned. There are those diagrams in the manual but nothing on my setup. I’m really just looking for an answer to that question which I believe you said you weren’t certain on and someone else could answer it. Posting it as a new question makes sense as it’s kind of a different question than the initial thread.

I see one valid configuraiton and a possible configuration:

I will try that thanks! Is there a reason the red series might work in this setup of where the line is going to the light and not in the first box?

Is there a reason the red series might work in this setup of where the line is going to the light and not in the first box?

Yes. The Red series has the ability to run a small amount of current through the lamp even when it is off. This current will not cause the light to illuminate but is enough to operate the circuit inside the Red dimmer. There is a down side to this. Some lamps / bulbs do not allow this small current to flow. In these cases you will need to install a bypass at the bulb.

@JohnRob @Bry Ok, so actually I was able to get it to work perfectly so far now. Since you mentioned getting the line, What I did was looked online and saw I could rewire what I had pretty easily. If you look at my diagram from earlier, took the line/hot(which was white) and put that in the line in the inovelli and took the black going to the 4 way switch and put it together with the black where the line/hot white wire was originally. Everything else stayed the same and I am getting constant power to the Inovelli switch and seems to be working fine. I’ve attached the diagram of what it looks like now. Thanks for your help and hopefully this would help anyone else with power at light scheme. 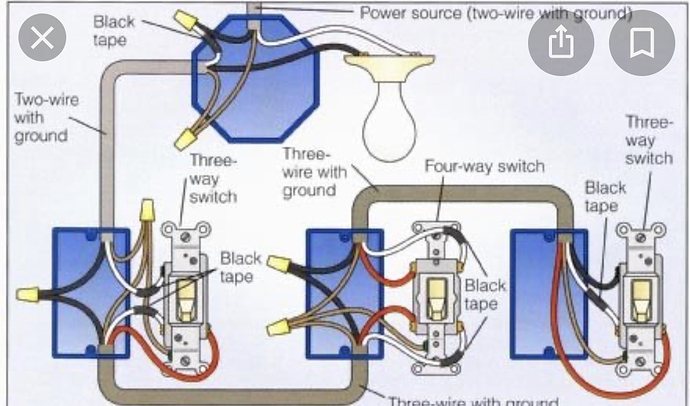 Glad you got it working, but it’s interesting that it’s working.

What you did is to grab the hot coming from the light to power the Inovelli. You then took the black containing the switched hot coming back via the common on the last switch and connected it to the light going back to the light.

With dumb switches, that’s just flipping where the hot starts and will work fine either way. But in your new situation, you have a non-neutral at the Inovelli and Inovelli has always said that a non-neutral installation needs Aux switches.

That’s right but I also connected the jumper neutral wire to the neutral wires that are together in the same box for the outside light. It didn’t work without it. Tested that and there was no power to the Inovelli switch if I removed the jumper. I have the AC power as neutral and type as 3 way toggle. But yes all 3 are working just like a normal setup right now. If I turn it off at one of the dumb switches it works and the Inovelli LED bar is still powered with the slight illumination.

Got it. Makes sense. As long that neutral bundle is on the same breaker as the lights you’re controlling with the Inovelli I see how you got it going.

Just curious. Is that neutral bundle you’re using on the same circuit as the lights you are switching? Your lights are on the end of a run, so if they were on the same circuit I would have thought that the line would have originated in the box. If it is, that’s good. If it’s not, then this isn’t a solution we want to suggest to others.

It appears to not be on the same circuit. There are 3 switches in this box by my front door. One for outside light, middle is foyer light and right is upstairs hallway light. I recently moved in and the labels in the circuit breaker are basically useless, so have been trying to find out what belongs to what so I can label them properly. But I haven’t found which circuit to the outside front door light is.

The easiest way is to go to the light with someone else at the breaker box. Start flipping breakers until you find it.

I don’t know where you’re located, but if you are in the US and subject to the NEC, then your installation where you are using a hot from one circuit and a neutral from another circuit is prohibited. There are any number of reasons you should do this, including overloading a circuit, improper circuit protection and causing issues on GFCI and AFCI circuits. Just because it works doesn’t mean it’s safe!

Yeah to be safe I will try the aux switches without neutral instead. If that doesn’t work, I’m thinking to move this inovelli switch to my kitchen and try another smart product.