This fan has a male-female hookup for the receiver that comes in the box, how would I wire this for my LZW36? Here is the wiring guide for the fan.

The biggest problem is I have two fan motor wires and one light in the male connector. Could I just strip these and hook them up to the LZW36 Z wave receiver? 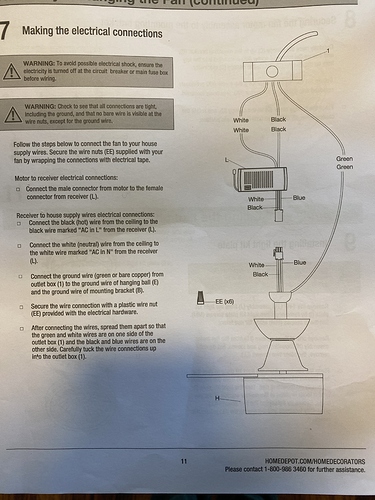 @Bry you answered a question similar before, any input here? I’d appreciate it!

Same wiring as this:

Here’s a link to the manual for your fan: http://pdf.lowes.com/installationguides/836071009600_install.pdf …and a screen grab of the wiring diagram: [Screen Shot 2020-09-23 at 8.37.56 PM] …and one of the three example wiring diagrams from Inovelli’s web site: [image] Remove the fan’s included canopy module and cut the three wire connector. Black and white from the Inovelli canopy module to the black (hot) and white (neutral) wires coming out of the ceiling. White (neutral) from the…

you answered a question similar before, any input here? I’d appreciate it!

Be glad to give you my thoughts. I’m usually the guy saying buy a fan without a remote, so there is no module to content with. It’s not that the Inovelli canopy can’t be used, it’s just a bit more complicated in some cases depending on the fan and the technical level of the user.

It’s a bit tough to tell from the one page you posted, but I’m going to GUESS that this fan has a light kit. There are three conductors coming from supplied module. My intuition tells me that the Black is probably for the fan, the Blue probably for the light and the white is the neutral used for both.

The bigger question though is if the supplied module is just a wireless switch or is it a transformer as well. Does your fan have an AC or a DC motor? If you post a link to the fan or the make/model, we can look as well.

If the fan is AC, then you ought to be able to use the Inovelli. If it’s DC, then the Inovelli won’t be compatible.

I have never swapped a module out, but there are others who have and are more knowledgeable than I about this. Hopefully they’ll be able to comment shortly.

Thank you for the thoughtful responses. Here is the link to the manual. Strangely I think I have a slightly newer model that doesn’t have the manual online, as you can see mine has the male female connectors rather than the separate wiring.

I can’t find any info on the motor type.

This does look similar, I was quite worried about chopping the connector but it looks like that might be the solution. I need to make sure the motor is DC before I do that though. Actively looking to find that information.

One thing you could do is wire the module on the AC side on the bench and then using a meter, check the outputs and resulting actions from working the remote.

Good idea, I’ll give this a whirl.

DC motors are more expensive than AC motors. The manual has the wires named “L” (load) and “N” (neutral), which are AC wiring terms. Get snipping!!! 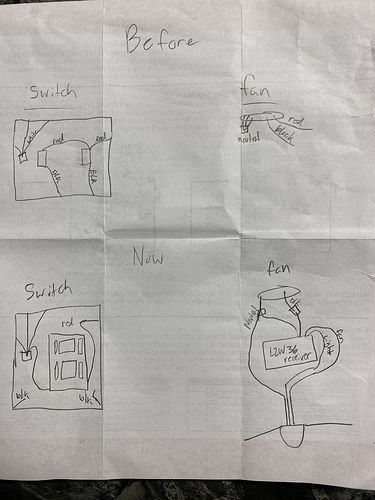 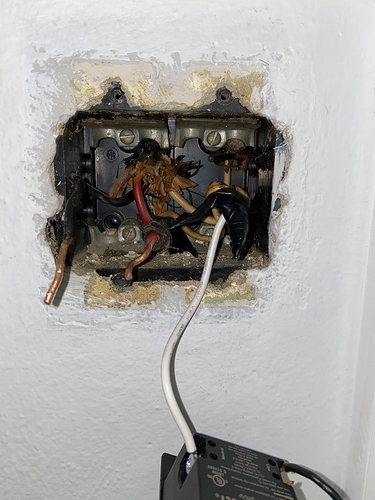 So I snipped as recommended and connected everything. Now I am in a weird situation where my switch turns on but the fan is lifeless. No response to turning on the breaker or pressing buttons on the switch. This happens when I hook the red wire up to the switch on the “line”.

Can anybody tell me what I am doing wrong here? I tried to draw up a diagram of how I have it set up, hopefully someone with a bigger brain than me can decipher.

In the photo of the switch box you can see that I have neutrals (hooked up via jumper) as well as two black wires (load?) and a red wire that splits in two (line?)

I don’t understand the “Before” wiring. Did you have one switch or two switches that controlled the fan?

One switch for the light, and one for the fan.

Do you have a picture of the ceiling box?

Here is a picture, it is all wrapped around to try and fit under the canopy. If I need to unravel and organize so you can see I am happy to. Thanks for the help! 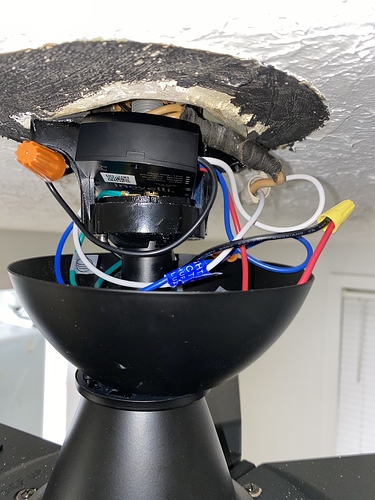 In this photo, the orange cap connects the load to the ceiling and the tan cap in the back right connects the neutrals. Everything else is just connecting receiver to the fan. (Save for the ground)

Do I need to pigtail the red and one of the blacks from my switch box together and connect that to the LZW36?

Do you know where the source is?

Is the black wire at the fan even connected to anything? If the red wire is the Line wire, how is the fan getting power? 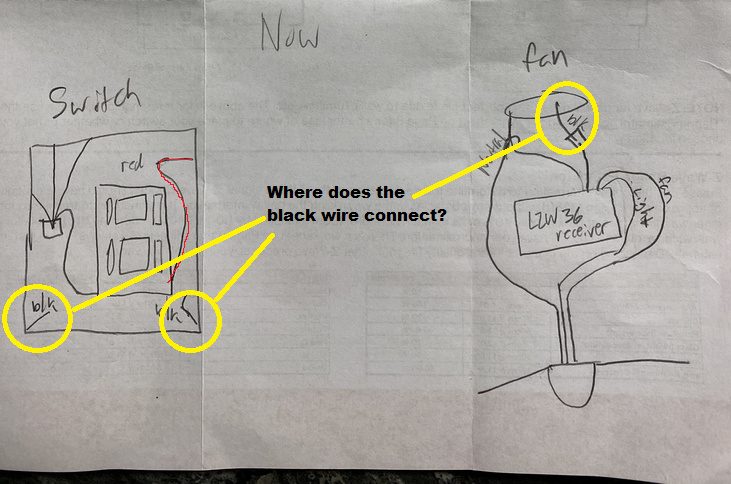 Also, where does the other black wire go? Is there an extra black wire in the fan canopy?

@harjms and @jtronicus helped me realize my major mistakes. It’s finally working! Completely user error as expected. I needed to attach both the line AND load, not either or. (As it says in the wiring diagram that I somehow overlooked.)

Thanks everyone for your help!