@Eric_Inovelli started this conversation for 2.0. The items I’ll bring up here, I believe, can be done with 1.x FW and a few driver changes. Tagging @EricM_Inovelli as well. Sorry if this thread was started somewhere else.

I finally had time to install the first of two switches. This thing has surpassed what I was hoping for

Hopefully not jinxing myself. But, everything has been rock solid for over 30+ hours

. We really like the breeze mode as it is very quiet, all you can hear is the fan blades spin up or down. Unlike my HB Zigbee unit. It sounded like a Mack Truck changing gears. Making this feature unusable at night in the bedroom.

First, FW improvements (most likely applies to all hubs):

That’s all I have for now. Thank you for making this product!

My $0.02 is to name the three modes Partly Cloudy, Tropical Storm, and Hurricane (to tie into the product name):

Partly Cloudy should be heavy on low, with bounces to medium and an occasional blip to high.

Tropical Storm should be heavy on medium, with bounces to low and high.

Hurricane should be heavy on high, with bounces to medium and an occasional blip to low (since hurricanes have eyes that are calm).

This has been implemented/fixed with the latest Hubitat Driver!

I’m also seeing that I can only set low/med/high on the fan. I ended up changing tile to a “dimmer” as a workaround. 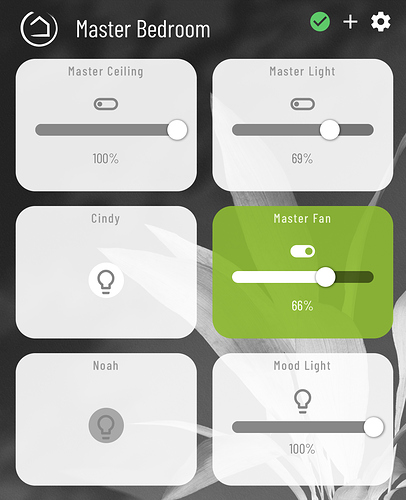 @Ma2J that seems to have done the trick. however it seems that we are still limited to low/med/high speeds. setting med-low or med-high speeds results in being reset to medium.

When looking at power measurement, I am seeing 1w with both fan and lights off. I am hoping this is not leakage? But rather an offset…

This is the power draw from the MCU in the fan module. It is probably like .6W and is rounded up or something. Our switches / dimmers are the same but the firmware is programmed to round down to 0W if the switch is off. Might be something we update in the future.

The time/lag from when I push the button for the lights On seems to be longer than when they turn Off. It seems noticeably longer than my Red Series Dimmers and switches. to me, this is a “don’t care”. But to others in the house, they have noticed it and perceptually I would agree.

I think this might be related to the bulbs. What type are they? LED bulbs seem to have a higher % required to turn on. For example, they might not turn on until they get to 15% but after they are on you can dim them down to 10%. If you raise the minimum level to the actual level they turn on at then the response time will seem quicker.

Breeze Mode: Currently the breeze mode seems to spend a lot of time at a slow speed then going up. I would like to suggest that there be 2 or 3 breeze modes supported. Examples: Changing from slow to medium or medium to high, and random low to high?

We will definitely look at improvements with breeze mode. Probably some configuration parameters that can be changed. Seems there are lots of combinations here that one user may like over another.

@njcorwin The fan module only supports 3 speeds + breeze mode. The “fan component” driver that is local to Hubitat has those extra speeds in it but they all map back to the medium speed for our fan controller.