I recently bought a Hunter Minimus fan and installed a LZW36 to control it. I’m getting some really odd behavior and I’m not sure if it is fixable via config or not. The fan does come with a remote, but unfortunately I can’t see the receiver so I couldn’t do a direct replacement. I checked out what hunter says in regards to using a wall switch for it and they said you can use this. Seemed to match the Inovelli switch enough so I thought it wouldn’t be a problem.

As for the weird behavior I’m seeing… unfortunately it is hard to describe. Often times the light doesn’t turn on unless I press the fan button on the switch. However, often times this doesn’t turn the fan on, only the light. I then went back to the light switch posted by Hunter and saw it has a separate power button. I think this may be the root of the issue, but I’m not quite sure how to debug. It seems that the fan has to have power in order for the light. As, when wiring the fan up, the fan has the typical 4 wires on top near the canopy, but then the light plugs into two wires below the motor so I’m not sure if there’s anything going on in there (where I’m assuming the module for the stock remote is). Note: the fan remote did work as expected when I hooked the fan up to a normal switch without the Inovelli canopy wired in.

That remote is just a RF remote that is compatible with whatever module the fan happens to have in it. It likely is not in the light module since those are generally optional to install. Based on the wiring diagram though what is more likely going on is that the module the fan has is expecting full power from the black wire. Unfortunately when you add the inovelli module inbetween it no longer gets that. Since that module controls the light too it ends up that the fan part of the inovelli module needs power for the light turn on through the fan’s built in module(if that makes sense). In any case I would think the only way to get this to work right is to be able to actually replace the fan’s module itself.

That makes perfect sense to me. That was along the lines of what I was thinking as well (especially when I saw the power switch on the wall outlet Hunter recommended). Looks like I may be out of luck then in case I want to open up the fan and find the module.

Can I use controls with an existing wall switch?

Well that is just a true dimmer I’d think. I actually did try that and that was just a complete no-go. I may try updating my firmware and using the instant on to see if that helps anything, but I won’t be holding my breath.

It will not work due to the remote controller module built into the fan. No amount of firmware updates will resolve this. Your only option at this point is a LZW30-SN at the wall to turn off the power to the load.

Ok, this sounds discouraging. I literally just bought the Hunter Minimus fan last night and came here to buy the switch and found this thread.
@twelvetosix, any luck so far?

To give you a basic understanding of how these work, here is the simple explanation.

The Inovelli fan/light switch is composed of two components, a switch (that goes in a standard wall box) and a receiver (that goes inside of the fan’s canopy). The part that gets confusing is related to the Inovelli canopy module.

The fan motor must be a 120VAC motor. If the fan has a DC motor, then the Inovelli isn’t compatible.

The Inovelli canopy module must be connected directly to the fan’s motor and light (if there is one). It cannot have any other electronic module, such as one that communicates with a handheld remote, connected between it and the motor and light. If there there is such a module, that must be removed and the Inovelli canopy module substituted in it’s place. Obviously, the handheld remote will no longer function.

So if the fan you are considereing has a handheld remote, then understand that you’ll be doing a bit of work removing the built-in receiver and substituting the Inovelli canopy module. As part of this process, you’ll have to identify the conductors that go to the fan motor and the light.

So if you are shopping for a fan and want to know which are most likely compatible, pick one with an AC motor that DOES NOT have a remote control. Usually, fans with pull changes for the fan speed and light are a good bet.

One more thing: If the fan has a light/light kit, you are better off selecting one with a light that has a changeable bulb. Not all LEDs work with all smart switches. If you have a replaceable bulb, then you’ll be able to change the bulb if it’s not compatible with the dimmer.

I just gave up and bought a regular smart on/off switch (which works fine). I plan on just disabling local control on that switch and using a rf transmitter to control the light/fan via scenes. Granted I could potentially lose the “status” of the light/fan if the remote is used, but maybe I’ll just hide it from my girlfriend

Unfortunately, the canopy module for this fan (as @Bry mentioned) can’t be removed, or at least not without taking apart more than I wanted to. One thing I am curious about now, but probably won’t try is to disable local control for the fan and lights on the switch. Hunter does sell their own switch that they claim is compatible with this fan and it does have its own module you have to install so it seems the fan IS able to use another module in addition to the existing one. On Hunter’s control there is a on/off button in addition to the fan/light control. Perhaps if there is constant power to the fan, it MIGHT work. When I played around with it once, I did seem to get it to respond to a specific sequence of commands for a bit and I think it is related to either the fan and/or lights being powered on first. If you already have the switch and the fan, give it a go and let me know

I’ve been personally using these fans with the LZW36 they work well and the built in LEDs are dimmable. 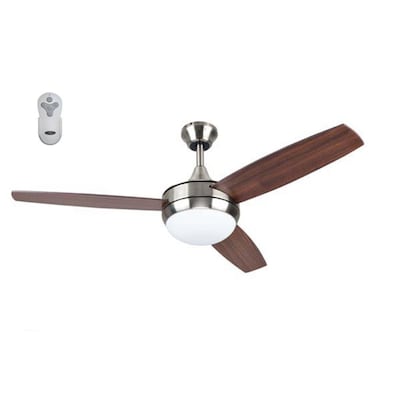 The wall controllers from Hunter will not add a module to a fan like yours that already has one integrated. They are RF controllers and will pair with the controller built into the fan.

It seems Hunter has moved away from the add-on RF controllers and is now building them into their new fan models (since EVERY fan has a remote control now) it probably saves them a decent amount by integrating it.

If you want to use a 3rd-party controller, you will need to replace the fan with one that has one of the add-on modules included. I recently installed a Dempsey model (using Leviton switches because Inovelli doesn’t offer a standalone fan switch yet) and it worked fine by tossing the included module and bypassing it with dual switches.