Hello, I’m purchasing a new fan with the goal to use a fan switch with it. I’ve been shopping AC fans and been having difficulty finding if it would be compatible. I think I need to buy a pullchain fan instead of one that comes with a remote but I’m unsure.
After many hours of searching I settled on this fan
Hunter Parmer 46 in. LED Indoor Brushed Nickel Flush Mount Ceiling Fan-59166 - The Home Depot
I originally wanted to buy this fan but was worried the remote would mess with the wiring and started looking for pull chains.
Hunter Dempsey 44 in. Indoor/Outdoor Matte Black LED Low Profile Ceiling Fan with Light Kit and Remote Control-50400 - The Home Depot
I’ve been shopping a hard category, low profile flush mount fans under 44". I compromised and think I’m going with the 46" fan because of stock issues. I have an 11’x10’ room and hopefully it won’t be too big for my small master bedroom. What should I be looking for in a purchase besides AC fan? Compatibility has me worried and stressed have an electrician coming on the 10th.

I think both fans will work. the second one does have a built in receiver, but I don’t think it’s any different from Inovelli. Basically, you’d use Inovelli’s in place of the Hunter one. Reverse switch in mounted in the canopy so that’s easy. Sometimes other remotes support reverse switching, but this one is hard mounted.

I think both fans will work.

I have a ton of these and they work REALLY well with the Inovelli switch: 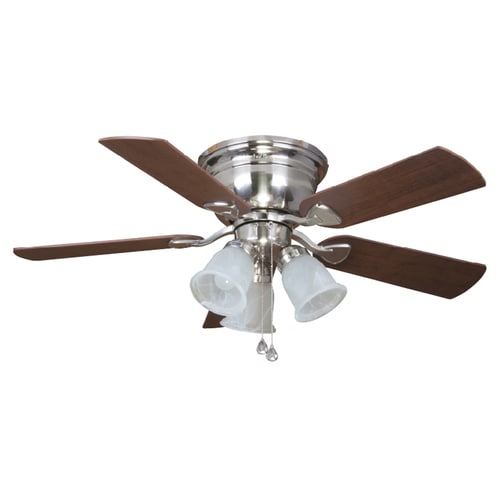 Just as another data point.

I got off the phone with Hunter and was told the Dempsey would be able to be wall controlled if you simply don’t wire the remote receiver in. This model would be preferable for no pull chains fore purely ascetic’s. So I imagine I can just swap receiver’s with Inovelli’s and be on my way.

Having the electrician install because I need new wire ran, otherwise I’d be messing with the receivers myself.

Note that the inovelli only requires 2 wires (plus ground), you don’t need a third wire as the switch controls the fan/lights power via RF signal.

So you might not need an electrician after all if you currently have a light there and a neutral in the wall box.

This 3 light style was definitely a serious consideration. I was also looking at the
Newsome or Crestfield
Now I’ve been looking at dome style lights as a more modern look. I initially went for the traditional 3 light style but someone convinced me on the domes.

Having the electrician install because I need new wire ran, otherwise I’d be messing with the receivers myself.

Note that the inovelli only requires 2 wires (plus ground), you don’t need a third wire as the switch controls the fan/lights power via RF signal.

I’d have the electrician pull a 3-wire nonetheless. You don’t have to use the third conductor, but that’s what is standard for a fan, and nice to have in case you don’t like the Inovelli implementation.

he/she may not want to mess around with swapping out the remote receiver.

Good point. The install instructions look like its a canopy module, so either way they’d have to wire in the module.

Another point I’d like to make is you may need a bypass if you find the integrated LEDs are flashy or slight dim when powered off. Sometimes integrated LEDs do not work well.

Another good point. I agree you want a fan where you can swap the bulbs, because if the bulbs turn out to not be compatible and you can’t swap them, you’re hosed.

I believe both the Dempsey and Parmer have 2 bulbs inside the dome fixture so I’d be ok trying different bulbs.

We are still extremely happy with the 44" and 52" Windward fans that we bought last summer. 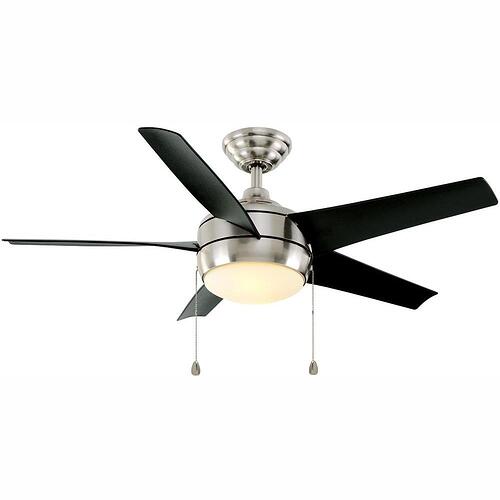 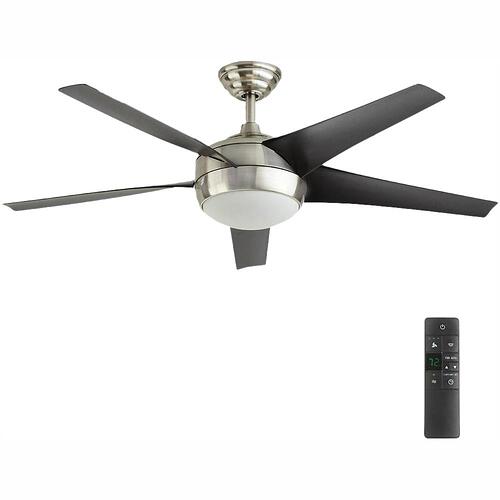 Both are convertible to flush mount, and were easy to wire to the LZW36’s canopy module. The 52" comes with a factory remote in the box, but the wires from the motor housing use the same color codes as the 44" model so it is easy to use the LXW36’s canopy module with a few snips to cut the included canopy module’s pre-wired connector off.

Our house is small, with low ceilings and tiny rooms. These have worked out very well for us, and both are (silently) running 24/7 on slow speed even in the winter…

I should also add that we tossed the included LED light bulbs from both kits, and used these (don’t remember if we used 60 or 40W):

Thanks I really appreciate the recommendation! I’m seriously considering getting the 44" windward.

My question is how do the pullchains operate with the switch? Is it possible for the switch to read states or does it matter what state it’s in for the switch to adjust it? I’m deciding between having pull chains or getting a model with a remote and swapping the receivers.

If the fan has chains, you leave the light chain on and the fan chain on full speed at all times. The LZW36 switch (or your home automation system du jour) does all of the light and speed control. We didn’t even put the chain extensions on our 44" (bedroom) fan, and have just the short chain “pigtails” hanging out of the motor housing. The 52" version doesn’t have chains.

I have our Hubitat connected via Homebridge (HOOBS), and control the lights and fans via HomeKit with our Apple Watches via Siri. Set bedroom light to 25%…

Ok got it. I’m assuming the 52" version came with a remote and you were able to successfully swap receiver?

I have a Qolsys IQ panel as my hub and am worried if it has support for fans on alarm.com I Googled and couldn’t find an answer so I’m hoping.

I’ve got a Gocontrol HUSBZB usb stick on standby and am about to spin up Home Assistant.

The remote receiver included with the 52" fan was the same size as the Inovelli one, and came with a pre-wired connector on it that mated to the pre-wired fan. The wire colors are the same as on the 44" fan with no remote, so it is simple to clip the connector off and wire the Inovelli canopy unit.

One last tip is to have your electrician pull 12/3 or 14/3 if they are running new wires from the switch box to the ceiling, for future use. The LZW36 does not need the third wire, but something in the future may…

If you have 3-wire, I’d STRONGLY suggest you to consider a switch that uses it, instead of relying on RF.
In my own personal experience the RF has been less than ideal. I upgraded the firmware, extended the antenna, did factory resets, and still have to do airgaps periodically.
I understand this is an Innovelli forum and i’m suggesting you to consider other brands, but my rule is to always use hardwiring if possible. YMMV.

I’m getting new wire ran to where there wasn’t anything existing, I think I’m requesting 3 wire. Definitely a little worried about which route I should take now. Any other z wave fan control switch you thought about instead? I’m running out of time for the electrician and need to order things.

At least Zooz and Homeseer offer zwave fan switches for wired installs. Didn’t look in more detail because my install has a single wire for both items, so Innovelli is the only option.
If you have the electrician on site, you may want to add an extra gang to the switch box, so you have a separate gang for the light and the fan.