I like to set the config/favorite button to a low dim level. I did this in Hubitat’s Rule Machine by creating a rule for a button device for button 7 (the Config/Favorite button) for my kitchen and other lights. I use that mainly first thing in the morning or late at night. However, once I’m in the room for a while, (or my wife gets up and comes into one of those rooms) we want to be able to go to 100% with just 1 push. I found that just pushing button 1 (i.e. the basic “on” button) did nothing - which makes sense since it turns the light on, and it is on, albeit it at a dimmed level.

So, I went back into Rule Machine and created another rule for the switch that pushing button 1 sets the dimmer level to 100%.

It works just fine, but I’m having an issue elsewhere just with the dimming in a 3 way situation just for the non-load switch that is too long and complex to explain here, but I’m wondering if having the above rule for the load switch in that 3 way situation might be causing some kind of lag that results in me not seeing the dimming fast enough when I try to dim the non-load switch to react to it. Again, I don’t want to get into those details too much here, but before I remove the 100% rule from the load side of the 3 way pair I’m wondering if there is some other way to get the light back up to 100%. (I know I could use another scene, like a double click, but the spouse will not go for that - and since we hardly use the dimmer function since I have the favorite button set to about the lowest dimming level possible - if there is no other way to do it, I’ll just leave everything as is).

What are you using for your non-load switch? I only have one dimmer in a three-way with an add-on/aux switch, and it seems to work just as I would expect with no lag when used to control the dimmer, but I do not get scene commands when the add-on/aux switch is used (which I was disappointed to see), so I can’t use it to activate rules like I’d want. The only usable report you get when using an accessory switch is the dimness value.

The only way to get the behavior you want if your setup is like mine is to put another Inovelli red series dimmer or switch in the non-load location.

Each one will act as a different device as far as RM goes. Is the rule set up to be triggered by only the load button?

Yes, the rules that set the dimmer to 100% and 40% are only by the load button (which made sense to me as the association is telling the load/destination switch to act like button one or 7 respectively were pushed).

Post a screenshot of your rule and provide the names of your devices. I think I can get you set up.

03/17/2021 - Think the one issue I still had below is resolved. The only issue I was having at the end of it all was I didn’t want the delay when I pushed button 7 (Favorite/Config button) to set the Den/Load side switch lights to 40%. One of the Eric’s had me set the Fade (Dim) rate for the button 7 push to 0 (I hadn’t set it at all thinking 0 was the default). Once I did the Button 7 push is much faster.

There is a tiny bounce effect when dimming from the Hall/Non-Load side which may be due to having Param 12 of both switches set to 11, but I don’t know if a different setting for one or both of them would be any better.

Geez, I almost solved the issue of not being able to dim up/down from the Hall/Non-load side switch, but trying to fix a new issue somehow messed it up.

First, this is how I got the Hall/Non-load switch to dim:

I turned off any association on Group 2 and have just associations on Groups 3 and 4. (Which seems crazy to me since the official Wiki page talks about just Groups and 2 and 4 and doesn’t mention Group 3. But that’s another story.)

Besides an overview screen shot of the Associations I’m also posting screen shots of the actual association so you can see how each association was actually set.

I’m also including a screen shot of parameter 1-12 for both switches. (As mentioned before they are both Red Dimmers and I’m using Hubitat). Everything is the same except the Hall/Non-load side switch Param 1, Dimming Speed is set to 0 (which is my normal setting for my Red dimmers) and I set Param 1, Dimming Speed, on the Den/Load side to 3. I also set Param 12 for Association Behavior to 11 for both of them.

I think I might have been getting a tiny bit of flicker every now and then dimming up or down, but it otherwise seemed to be working smoothly.

But I also want to use the Config/Favorite button (#7) to turn the lights on to 40%. It was working for both, but had a 3 second delay introduced by setting Param 1 on the Den/Load side to 3.

I saw a possible solution in another thread about creating a rule in Hubitat’s Rule Machine to change a parameter using setConfigParameter which I tried to adopt to change Param 1, Dimming Speed, to 0 when I pushed button 7 and then reset it to 3 after 4 seconds. When I did that, I did get the a push of button 7 to come on almost instantly, but now when I use the Hall/Non-Load switch to dim the light nothing happens until I release the switch then it flashes off for an instant and back on to the raised/lowered dimmed setting.

I’m posting a screen shot of the original rule and how I modified my button 7 rule. 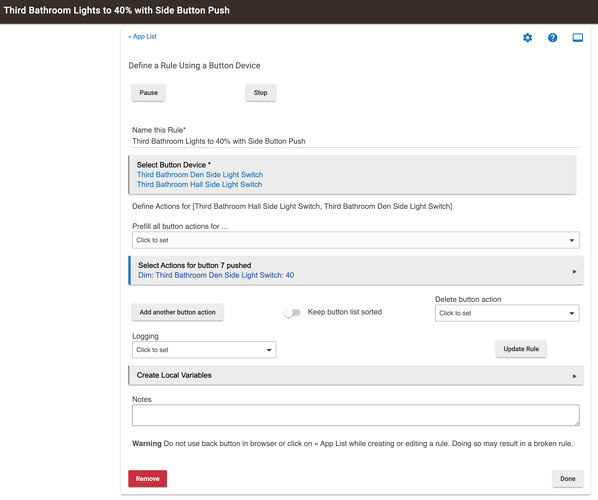 This is how I modified it to change Param 1, Dimming Speed, of the Den/Load side light to 0, turn on the lights to 40%, then set Param 1 back to 3 (seconds). 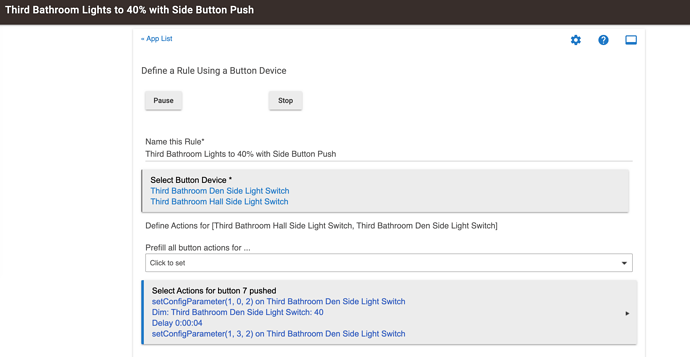 I can’t figure out why this messed up trying to dim from the Hall/Non-load side. If the end of the rule just reset the Den/Load side switch Param 1 back to 3, which it was before, why is it behaving differently now? (i.e. the dimming was working and now it doesn’t dim until I let go of the Hall/Non-load side paddle and the light flashes off and then on before setting the dim level).

So here is a P.S. that is really driving me crazy. I went back into the Den/Non-Load side device and set Param 1 to 1, saved it, and then set Param back to 3 and saved it again. So now the dimming is working again, but pushing either button 7 has the 3 second delay. So I’m totally confused why the setConfigParameter doesn’t seem to be working now in my rule for button 7.

Den (Load) Side to Hall Side Association on Group 3: 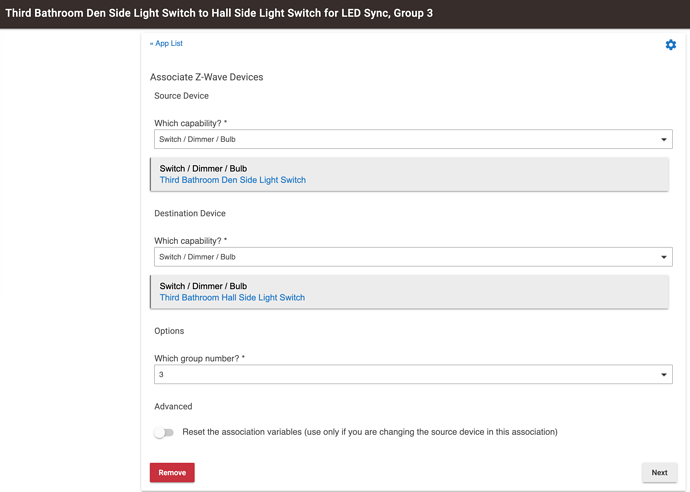 Den (Load) Side to Hall Side Association on Group 4: 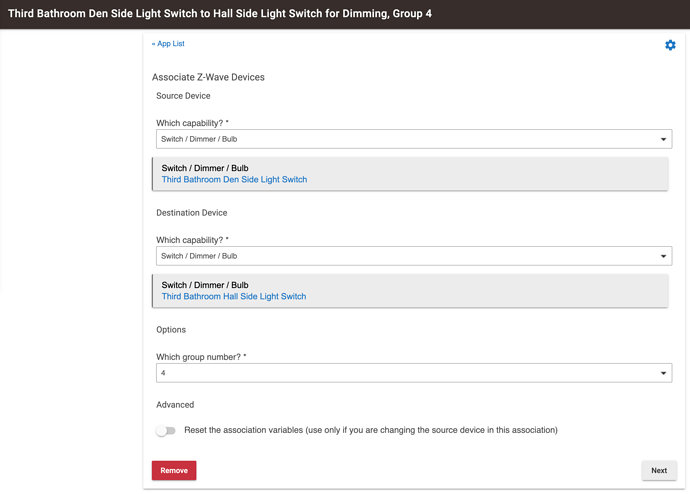 Hall Side to Den Side Association on Group 3: 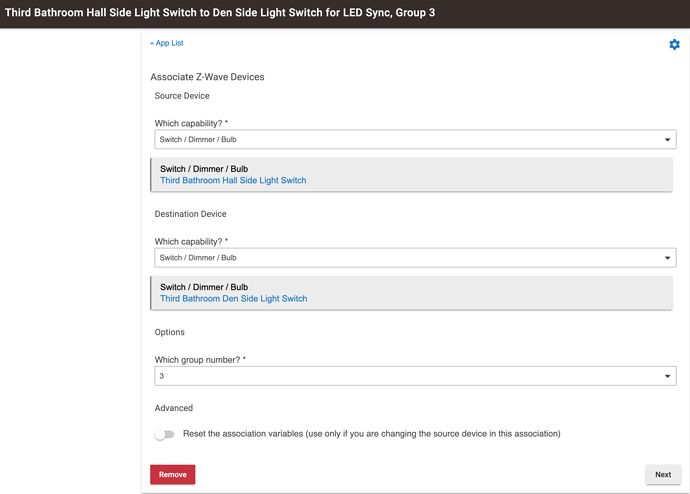 Hall Side to Den Side Association on Group 4: 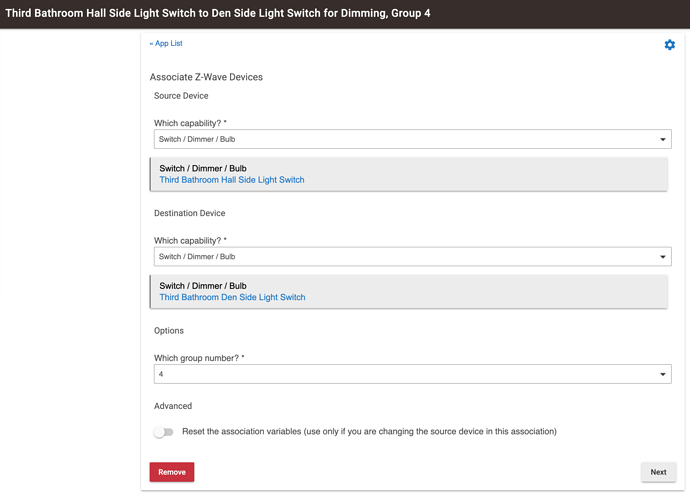 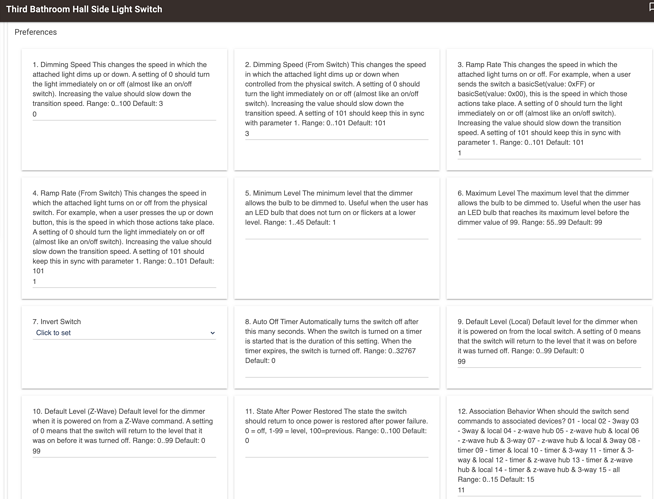 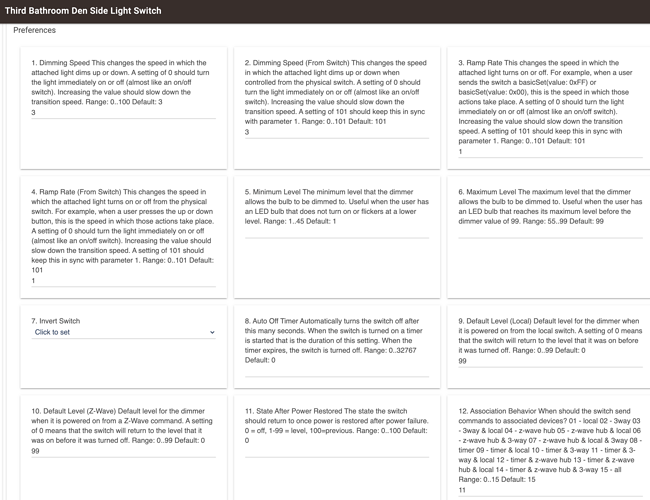