For whatever reason, my two Red Series Dimmer switches are not working with the Group 4 association. Group 2 works fine. I tried setting up the association again and it didn’t seem to make any difference. Here’s a couple images of the association config:

I followed the instructions on the association tool wiki. What’s interesting is that the Association settings show some weird additional associations in the IDE (Association Group 1). See below. Is this normal? Is there a way to remove those associations and just leave Group 2/4? 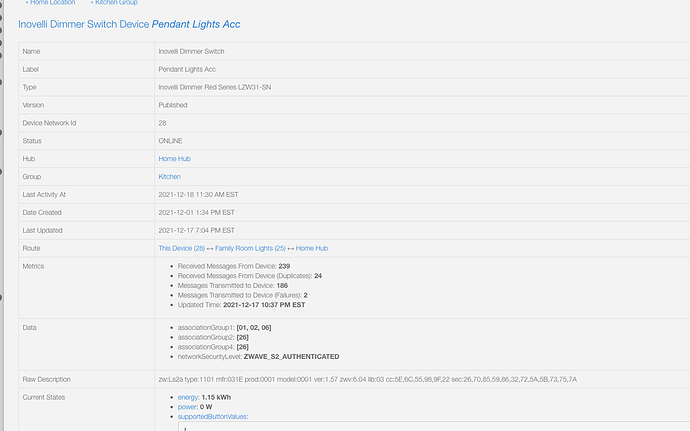 I’m not clear on what doesn’t work exactly?

I found that I had to associate groups 2, 3 and 4 to get the dimmers to work correctly and stay synchronized for both on-off and dimming.

I deleted the dimmer and re-added it. Now that weird association group 1 is gone and things seem to be working ok. I wonder why group 3 is necessary for your dimmers to work correctly.

Group 4 only updates the other device when you’re done locally dimming the one you’re controlling. It doesn’t send an update for the new dim level until you release the paddle. Group 3 does it in real time while you’re holding the paddle.

Adding group 3 broke the dimming function for me. With just groups 2 and 4, the dimming seems to work real time… Meaning it doesn’t wait until I release the paddle to set the dim level. Works just like the load switch.

This is lifeline and is needed. Pretty sure this is needed for control of the device from the hub.

I think I’m recalling the effect of group 3 and 4 backwards. I believe this is what I found;

group 2 sends on or off commands, which uses the on-off ramp time instead of the dimming ramp time. This one doesn’t matter much but with it both dimmers will both use the correct delays times.

This matches the documentation description.