Has anyone gotten these to work with VeraPlus?

Has anyone gotten these to work with VeraPlus?
I’ve tested both the red and black dimmers and a black on/off switch.

The on/off switch seems to work fine, so far.

The dimmer(s) were intended for use in a “no neutral” circuit.
The dimmers continually drop from and reconnect to the zwave network.
I’ve tried them in a configurations with and with out a neutral with the same results .see below… 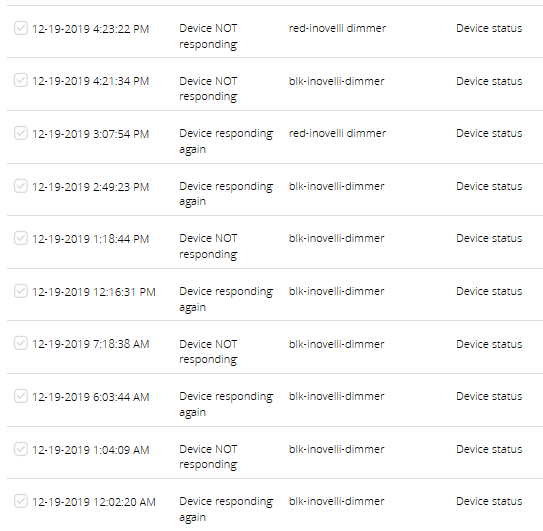 and the interace shows the following error 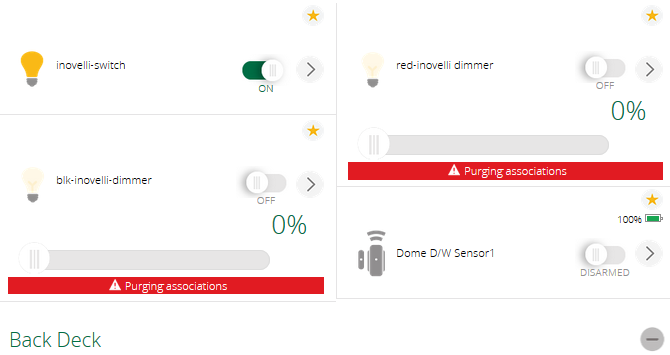 PS… plus, my with thinks the dimmers are defective because the lights don’t come on when you hit the switch. She hits it 5 times before there is light in the room.

Not Vera related but re: the on/off switch, I think the led should be on when the light is off and off when the light is on.
That how all the other many brands of switches I have work and it makes sense so you can find the switch in the dark.

I’m not sure if Vera provides easy access to this, but the color and level of the LED when on and off are both two separate parameters you can set for the on and off states. (Most I’ve seen with a single LED allow you to toggle whether it’s on when the switch is off or on.)

Can’t speak specifically to your actual problems, but if you do a search, there are some threads about the switches “crashing” or becoming unresponsive in certain conditions. I’m not sure anyone has tested if that also kills it as Z-Wave mesh participant. Maybe that could be related?

in my experience after trying for many days, inovelli red dimmer switches simply don’t work with a vera. period. i got one out of my 30 dimmer switches to work. i have no idea why this one does work. it’s set up the same as the others, but it WAS the first one i put on the hub. the others say purging associations and don’t work (or just are greyed out and a spinner). the first one said ‘purging associations’ for a week, but then suddenly came online.

until vera supports them, i don’t think you’ll be able to get it to work.

i’m giving up and buying a hubitat.

mine basically work, it’s just the coming and going from the network and the “purging associations” error message that is the problem.
they are controllable, and a command sent to one will wake it up and it’ll say it’s responding again.

The Red doesn’t completely work with VeraPlus. Red will install and you can turn the switch on and off, but it doesn’t report its status. “Purging Associations” error banner appears on the app. Vera Support told me they are aware of the issues, but offered no help.

both the red and black dimmers are not compatible with Vera

I suggest inovelli spend $59 and buy a refurbished veraplus hub and figure this out.
Frankly this should have been done before the dimmers were released.

I feel your pain here however this is a known issue. We have sent products to Ezlo for the certification process on all Vera platforms. Unfortunately I don’t have any control at the speed that certification will happen.

We are working on it though.

Hi Nathan
Thanks for your response to this thread/questions. Like all others here, I’m stuck wanting (badly!) those to work.
Any idea when this certification is due? Im mean, weeks/months/years?
Also, any workaround? I see threads suggestions to disable “auto discovery” on the Vero, mingling with settings. Do you have a link of instructions that you deem safe-to-follow that you could share? So not everyone is left with trial-and-error.
I’m so close to replace all my GE-dimmers with Inovelli’s and can’t wait for this to work reliable!
Thanks, looking forward to good news. Cheers, Lutz

this is a definite need - i will be following this thread. The reason i pre-ordered these (feels like 18 months ago) was to have these work with Vera. I have Way to many devices to switch out the hub now.
will keep watching… is there a way to “subscribe” to this thread so i can get updates?

Hi all, quick update from my side: I discovered recently that the Vera controller was getting super slow with it’s responses (you hit a device activity and you get the little circling wheel of business for 10-15s sometimes up to 30 seconds). After diving through logs and not getting anywhere, It occured to me that it started at the time I integrated the Inovelli Red Dimmer - and seeing it’s sitting there in “problems configuring” and “error getting values” red-state, I decided to unpair and remove it.
Problems solved! Vera is back to 1 second max response time.
In conclusion, if you attempt to keep a Inoveli Red dimmer paired, it kind’a works but will kill your VeraPlus response time. Until this all is resolved I will not buy additional Inoveli dimmers. Please let me know if/when this is fixed, because I remain a fan.

wondering if you’ve heard anything from vera or have written advanced drivers for them. i have to put 2 hubs in all my rental homes now, hubitat for the innovelli red dimmers and a vera for the locks and thermos. my sw is integrated to vera for lock codes and termo settings.

nope. if I were you, unless there’s some reason you’re married to inovelli for some reason, I’d pick a different switch and have 1 hub.

on another note, weeks after the last vera firmware update/upgrade , the “purging associations” error went away on the black switch, and a week or so later the red.

I have not turned notifications back on

Is there any update with Inovelli switches and Vera? After having nearly every one of my GE/Jasco switches fail over the course of the last 4 years, I’m officially done with GE. I’d love to give Inovelli a try but I’m reading all of these issues getting them to work in Vera…

Sooooo… The issue is that EZLO won’t support the Inovelli switches at this time. We get a lot of, “purging association’s” that happen.

We fixed this on our latest firmware, but we don’t have this firmware in warehouses yet, so you’d have to update it manually ;(

Hey, thanks for the reply! As I’m considering moving to Home Assistant on an RPi, so I may just pick up a Z-Wave stick and a couple of the Red switches to play around. That way I’ll have the Z-Wave stick to do OTA upgrades.

Well, good news bad news. I got my two new Inovelli Black switches installed and paired with Vera (after upgrading the firmware) but had another GE / Jasco switch that was on the same circuit flake out. Switched off the breaker to install the new switches and when I switched the breaker back on, the GE switch has the dreaded blinking blue light. Man I hate these things!

How do I update the firmware of the switch?

Overview Below is a step by step tutorial to upgrade your Z-Wave devices (Inovelli & Non-Inovelli). The important thing to note is that your Z-Wave device needs to have the ability to update OTA (Over-the-Air). This is a special feature put on...